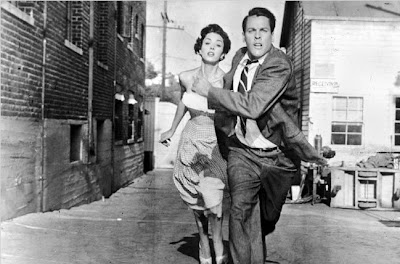 Though Kevin McCarthy had a lengthy life and acting career, he's always going to be remembered best as the first person to discover the existence of those pod people in the original version of Invasion of the Body Snatchers. The actor has died at the age of 96.

He made his Broadway debut in 1938 in Abe Lincoln in Illinois He returned to Broadway frequently throughout his career in a variety of plays including the original productions of Advise and Consent and Kurt Vonnegut's Happy Birthday, Wanda June. His last appearance was in 1985.

In the late 1940s, he began appearing in televised plays, some of which he appeared in on Broadway, before making his film debut in 1951 in Death of a Salesman as Biff, for which he received an Oscar nomination as best supporting actor.

He confined his screen work to televised plays until returning to the big screen in 1056 for Don Siegel's classic Invasion of the Body Snatchers. Again, he returned to television after that, adding some episodic work including an appearance on The Twilight Zone.

When he did make films, they tended to be notable ones such as John Huston's The Misfits, The Best Man, Robert Altman's Buffalo Bill and the Indians, Philip Kaufman's remake of Invasion of the Body Snatchers and Innerspace.

He also appeared in films that fell somewhere short of being classics such as Piranha, The Howling, Hero at Large, My Tutor, Twilight Zone: The Movie, UHF and Greedy.

His television work was so prolific, I won't attempt to scratch the surface except to mention his regular roles on Flamingo Road and the Dynasty spin-off The Colbys.

Comments:
As a kid, I first knew Kevin McCarthy as the villain character in films like INNERSPACE and UHF. It wasn't until much later that I discovered he was the hero in the original BODY SNATCHERS. I subsequently recognized him in other Joe Dante films like MATINEE, THE TWILIGHT ZONE, THE HOWLING and PIRAHNA. I always liked seeing him. He was a joy to watch. He will be missed.

Loved him in UHF and, of course, INVASION OF THE BODY SNATCHERS, the film he'll be most identified with. He brought a real authenticity to the role that kept the film grounded. He will certainly be missed.

I'm sorry to hear of his passing. I most remember him from INVASION OF THE BODY SNATCHERS, first. Yes, I'm that old. But, I still got quite a kick from his Joe Dante film appearances. Especially, his cameo from Philip Kaufman's 1978 INVASION remake. Loved that! May he rest in peace.