From the Vault: The Deep End 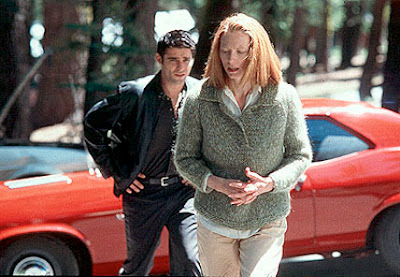 Margaret Hall's to-do list: pick up one son from baseball, drop off daughter at ballet and get other son to music lesson. Is it any wonder she can't find the time to raise $50,000 for an extortionist? This maternal instinct lies at the heart of the new thriller The Deep End.

Margaret (Tilda Swinton) lives with her three children and father-in-law (a nice turn by Peter Donat) while her husband serves his country on an aircraft carrier. It's Margaret's oldest son, Beau, who makes mom vulnerable to blackmail, not so much by his actions as by her desire to protect him at any cost.

Based on the 1940s novel The Blank Wall by Elisabeth Sanxay Holding, The Deep End puts a domestic spin on classic film noir situations. Written and directed by Scott McGehee and David Siegel, the film moves a little too methodically at the outset, but it picks up steam as it rolls along.

The solid cast also includes Goran Visnjic as the conflicted half of the blackmailing pair and, most especially, Jonathan Tucker as Beau, a teen torn over his own secrets.

While Margaret is the glue that holds her family together, Swinton serves the same purpose for the movie itself. Her subtle, striking performance turns out to be The Deep End's main asset.

The easy route would be to play Margaret as overwhelmed or distraught, but she's been steering her family's course by herself for so long that the criminal intrusions are just another errand to complete. Swinton captures this mother's devotion beautifully, never questioning what she's doing: Her son is in trouble and she's going to get him out of it.

I'd never seen that movie, but checking IMDb, The Deep End is credited as being adapted from the novel The Blank Wall and The Reckless Moment is credited as being adapted from the story The Blank Wall that ran in Ladies Home Journal, both by same author, so perhaps the author later expanded it to book form or IMDb messed up and the magazine just ran it in abridged form. In any rate, both films took the same author's story/novel as its source. I've never seen The Reckless Moment.

"The Reckless Moment" is much better. Given it's release in 1949 you won't find any contrived "gay revelation" moment and that's a relief.

However, "The Deep End" has Tilda Swinton, a beguiling actress in any film, and she's excellent in this one too.

The true answer probably lies in the novel. It might have had the gay element and there would have been no way it would have been allowed to be filmed that way in 1949. In the great 1947 movie Crossfire, the hate crime was change to anti-Semitism for the film while it was a anti-gay hate crime in the original novel. That might explain why The Deep End says it's based on the novel and not the screenplay. It was attempting to tell the book's story the way it was written but couldn't be filmed before.

I agree: "Swinton's wonderfully modulated performance makes The Deep End worthwhile." She carries this film. A less talented actress would turn this into a B-movie.

With her absent husband, she is like a single-mother. Her love for her gay son is unconditional.

I wrote a short essay (400 words) on The Deep End called "The Age of Consent." If you would like to read it, I am open to any feedback: https://christopherjohnlindsay.wordpress.com/2016/08/27/the-deep-end/