Men swarm around me like moths to a flame
and if their wings get singed, I can't be blamed 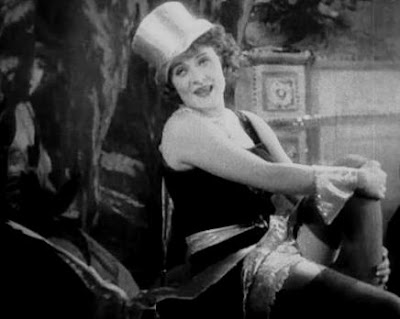 By Edward Copeland
It has been a long journey for me to be able to watch and write about Josef von Sternberg's 1930 classic The Blue Angel, and I refer to the version made in German, not in English. I had tried to rent it several times on DVD through different services but the region-free disc always flaked out at the same spot. I finally watched it on Netflix streaming (as I was ending that option before I switched to DVD only and Netflix customers know that happened in September) and was able to see the entire film. Then it was just a matter of finding the time to write about it, but other projects kept getting in the way and The Blue Angel deserves more than a quickie. It's sat around about half done for months, but with a new year, I thought I should get this out of the way, especially when I noticed that the English version got wide release in the U.S. 81 years ago today. Figured that had to be a sign.

My journey to see The Blue Angel proved difficult, but it actually ended up being a breeze compared to what happened to both versions of the landmark film over the many decades since both premiered in 1930, albeit in separate parts of the world.

Why The Blue Angel gained its status as a pivotal point in film history can be attributed to several reasons, such as: 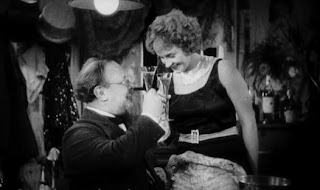 The differences in the two versions of The Blue Angel extend beyond just the language the actors in which the actors speak. When it premiered in Germany on the night of March 31, 1930, it ran 106 minutes. The raves (in addition to being able to see the as-yet-unreleased English-language version) prompted the U.S. studio Paramount to lure both von Sternberg and Dietrich, who by then were lovers, to the U.S. They made and released Morocco, which earned Dietrich the only Oscar nomination of her career for best actress, before The Blue Angel had its U.S. debut. When the English version was released in December 1930, it only ran 99 minutes, as filmed. The German version didn't play in the U.S. until 1947 and to emphasize Dietrich at the expense of Jannings' lead character (and the story itself), the film was cut to 90 minutes. It wasn't until 2001 that a new German language print, made from original negative material, restored it to 106 minutes and was re-released. Ironically, for many decades, the English-language version became considered lost until a print was discovered in a German film archive, restored and shown in 2009. 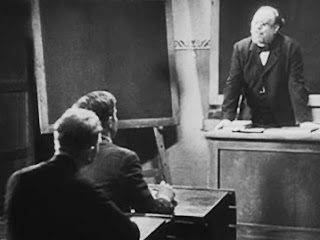 With that brief primer on the movie's history out of the way, now I can dive in to talking about the film itself which I'm glad to say stands up very well given that it's nearly 82 years old. Granted, The Blue Angel definitely shows signs of belonging to that awkward phase where silent filmmakers and performers adjusted techniques to the new sound era, but for the most part the movie and its cast clears that hurdle rather easily. Jannings stars as Professor Immanuel Rath, a strict disciplinarian as an English teacher at a boarding school in his small German town. His students mock him mercilessly (a favorite nickname is Professor Unrath, ratshit in English) but he holds a stellar reputation in the port city. (I love how in foreign

language films, even from way back, when they update the translations of the subtitles, they put in the profanities.) He doesn't earn much respect from his live-in maid either, who offers little sympathy when Rath awakes one morning to discover his lone companion, a pet bird, dead in its cage. "It pretty much stopped singing," the housekeeper (Ilse Fürstenberg) tells the professor. Though Rath maintains the community's regard, sometimes it's easy to see how he becomes an object of ridicule for his classless pupils or others, such as when he blows his nose and emits a comically absurd honking sound. Still, he tries to teach these callow lads, on one day specifically about Shakespeare's Hamlet. The students ignore him most days, but on this day, he discovers their fascination with postcards which he confiscates bearing photos of Lola Lola (Dietrich), the bawdy performer at the German version of a speakeasy which gives the film its title, The Blue Angel. Lola's images transfix Rath. He even blows on one of the cards and imagines that the feathers on her dress move. After interrogating one of his students, Angst (Rolf Müller) — whom the other students routinely harass because he doesn't frequent the club — Rath learns of the club's location and decides to venture to it himself since The Blue Angel and its performers such as Lola Lola debase the morals of his pupils. 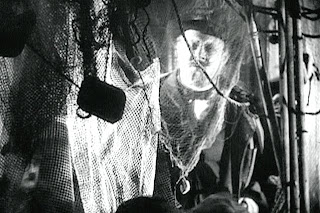 Backstage at The Blue Angel that night, several of Rath's pupils flirt hopelessly with Lola Lola, who plays with them until her turn comes to perform. She immediately commands the stage as well as the establishment, singing to the enthralled, lascivious men in the audience, "Guys, tonight I'm going to pick someone/I'm fed up with the young ones." As Rath stumbles his way inside The Blue Angel, he's so nervous that he gets himself caught in the mesh curtains that separate the main room of the club from its entrance. Rath might have convinced himself that he came to lecture her on moral failings, but it's Lola herself that's enticed Rath on this journey, and as she struts around the stage in stockings and garters, that isn't what's on Rath's mind. He remains enraptured as she croons "Naughty Lola," with lyrics such as "If any of you guys get too near/I'll kick you in the ribs/And punch you in the ear." The students spot their professor and flee backstage, but not before Rath spots one of them. Rath begins searching the rooms backstage trying to find the pupils, encountering a 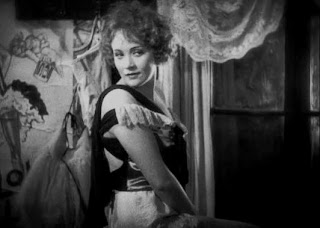 sad and disturbing-looking clown (Reinhold Bernt) who will be a recurring figure throughout the film. He ends up in the dressing room as Lola enters wondering why a man is in there. Rath tells her that she and this club are "corrupting my pupils." Lola brushes this off and begins to undress before Rath, leading him to begin to stumble toward the doorway, being an impediment to those trying to come in and out. Lola sees he's shy and climbs a staircase and Rath stands there, uncertain of what to do next when suddenly panties land in his hands from above. As Rath stands hapless, Kiepert (Kurt Gerron), a magician and manager of the troupe of performers appearing at The Blue Angel, enters yelling at the female performers, though he's protective of Lola until he learns who Rath is and tries to show him that he's important. He sends Lola back out on stage as Kiepert pastes on a mustache to prepare for his magic act. Rath lays into him for letting his pupils attend performances at the club. Before Kiepert can even deny such a thing, Rath spots one of this students and chases him out of the club. Things don't go so well later for the pupil Angst. (Could he be named any more appropriately?) As he sleeps in his bed, shadows approach on his bedroom wall, shapes somewhat reminiscent of Murnau's Nosferatu. Some of the other students start slapping and beating him repeatedly for telling Rath about The Blue Angel. 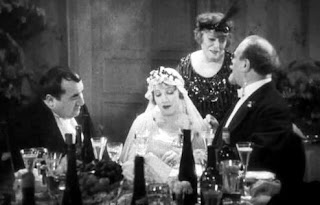 While it's easy to see the allure of Dietrich and how her star was born out of this film, Jannings proved he could be just as powerful with words as he was in his silent classics, even if some of his emoting continued to play as large as it did in those days when they 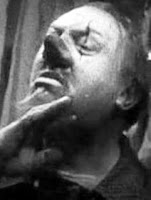 didn't have dialogue. Rath, a character created in the novel Professor Unrat by Heinrich Mann, manages to be a sympathetic creation in Jannings' hands even though he doesn't take any paths to make the professor that way. He's overly proud and expects too much of others. A plaque in his apartment reads DO RIGHT AND FEAR NO MAN. He isn't above being physical with his pupils, slapping cigarettes out of their mouths. When the school's director (Eduard V. Winterstein) warns him that he "risks his future on that kind of woman," Rath ignores him, telling him, "She is my future wife." Of course, when Rath actually proposes to Lola, she laughs at him, though she ends up marrying him anyway. Watching Jannings' degradation as he goes from esteemed professor to a man making money selling those postcards of Lola Lola, now his wife, to eventually becoming a clown in Kiepert's act and a cuckold as Lola seeks affection elsewhere telling him sometimes, "What choice do I have? That's the way I was made." 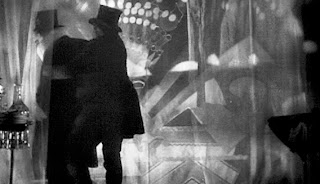 The lowest point comes when after five years on the road, all of them get booked to play The Blue Angel again, which to Rath's objection, they promote as the professor's return to the town. Not surprisingly, it attracts a sellout crowd. Rath barely seems human anymore. The professor who once taught Shakespeare, now is just a fool, and not even Lear's. When he takes the stage with the magician, he gets hung up in curtains, mirroring his initial entrance to The Blue Angel. When he tries to speak, intelligible words no longer come out. Kiepert makes a mockery of Rath on stage until a group of men, including Lola's lover, rescue him. Later, Kiepert promises that he will make it up to him. It leads to a quiet and sad dénouement. The influence of the German expressionists shine throughout von Sternberg's direction, though he makes great use of the addition of sound as well. For instance, when Rath makes his return down the alley to the club, he adds the unmistakable sound of a cat in heat. While Dietrich definitely makes a magnetic debut (even if it came out second), Jannings brings the heart and magic to The Blue Angel (at least the German version). 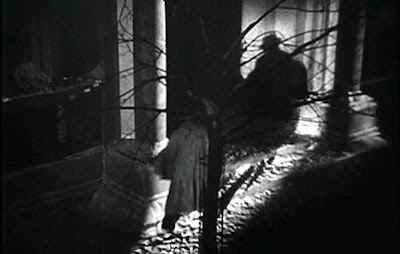 Comments:
One point: Rath doesn't merely imagine that the feathers move on the picture postcard. Early on, we see one of the students blowing on the card, which is a novelty item of the period. You blow to lift the feathers and reveal more of the model's shapely thighs, rather like later lenticular cards which you tilt at an angle to make the model's clothes disappear. When Rath, intrigued and curious, blows on the card, he is taking the first step to acting like a foolish schoolboy.