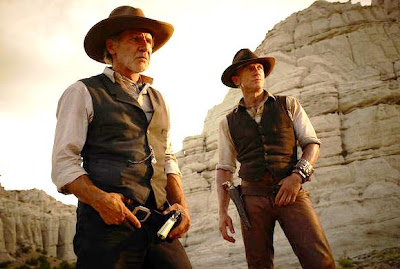 By J.D.
Jon Favreau has certainly come a long way since his independent film roots with Swingers (1996), the film he wrote and starred in. Over the years, he’s increasingly spent more time behind the camera than in front of it, directing Made (2001). The modest success of that film transitioned him to studio films with larger budgets such as Elf (2003) and Zathura (2005). Then came Iron Man (2008), his most ambitious effort to that point, and he rolled the dice on casting Robert Downey Jr. as his leading man. The gamble paid off and the film was a massive success, paving the way for the inevitable sequel. Rushed into production, the end result was a commercial success but a critical failure, which upped the stakes for his next film, Cowboys & Aliens (2011), an adaptation of the graphic novel of the same name by Scott Mitchell Rosenberg.

The premise is an intriguing hybrid of the science fiction and Western genres with an alien invasion set in 1873 New Mexico. To hedge his bets, Favreau corralled Daniel Craig and Harrison Ford to headline his film, which caused epic seismic ripples through the fanboy community at the prospects of seeing the actors who played James Bond and Indiana Jones in the same film together. As a result, expectations were understandably high. Could Favreau and company deliver the goods or would this be another Wild Wild West (1999)?

A man wakes up in the middle of nowhere wounded and with a strange futuristic device strapped to his wrist. He has no idea who he is or how he got there. Three men on horseback show up assuming he’s an escape convict and try to take him in. He quickly and brutally dispatches them, taking their gear and heading towards the nearest town — the former mining colony of Absolution. He eventually learns that his name is Jake Lonergan (Daniel Craig), a notorious outlaw wanted by the law for a variety of offences. One of which was robbing local cattle baron Col. Woodrow Dolarhyde (Harrison Ford) of his gold. When he learns that Lonergan is in Absolution, Dolarhyde and him men intend to lynch the outlaw in retribution.

However, a strange light appears in the sky just as Dolarhyde arrives into town. The device on Lonergan’s wrist activates and the light turns out to be several alien spacecraft that proceed to blast the town to smithereens and kidnap several of its townsfolk. Lonergan discovers that his wrist device is a weapon, which he uses to take down one of the alien craft. The film sets up Dolarhyde as a mean son of a bitch while Lonergan is a no-nonsense criminal. They represent two unstoppable forces of nature and one of the pleasures of this film is when they have to put aside their differences, repel the alien invaders and rescue the kidnapped townsfolk.

For years, Harrison Ford has made bad choices in the films he’s decided to be in and phoned in one-note performances, playing the same gruff character, but with Cowboys & Aliens acting against someone like Daniel Craig has inspired him to bring his A-game. Ford actually looks interested and engaged in the material and the role. It’s great to see him go up against Craig and their scenes together crackle with intensity and tension. Best of all, Ford has two scenes that expose his character’s gruff exterior and reveal a more vulnerable side. They are poignant and heartfelt because we’ve become invested in these characters by this point. This is the best Ford has been in years and reminds one when he used to play characters we cared about.

Craig adds another impressive man of action to his roster. He excels at playing edgy tough guys and is well cast as the enigmatic outlaw. Favreau does a good job of surrounding Craig and Ford with a solid ensemble cast of character actors. You’ve got Clancy Brown as the upstanding town preacher Meachum, Sam Rockwell as Doc, the mild-mannered saloon owner, Keith Carradine as Sheriff John Taggart, the always watchable Adam Beach as Nat Colorado, Dolarhyde’s right-hand man, and Olivia Wilde as a mysterious woman named Ella whose exotic beauty gives her an almost otherworldly aura. Hell, Favreau even throws Walt Goggins in for good measure as a member of Lonergan’s gang.

Favreau has all the traditional Western iconography down cold and the fun of Cowboys & Aliens is seeing these motifs clash with the science fiction elements. So, we see cowboys on horseback being chased by fast-moving alien spacecraft. This film doesn’t stray from the conventions of either genre or try to reinvent them but instead merges and fulfills them in a crowd-pleasing way. Cowboys & Aliens has impressive special effects, nasty-looking aliens, several exciting action sequences, and two cool heroes to root for. This may not be the classic that people were hoping for but it is a very entertaining film in its own right and sometimes that’s enough.