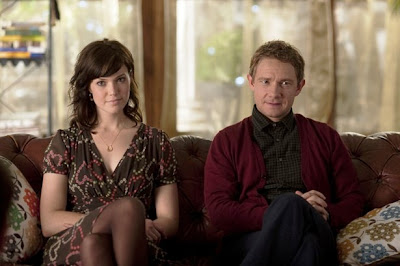 By Edward Copeland
Most film aficionados know that Anhedonia was Woody Allen's original choice for the title of Annie Hall. This isn't to imply that the British comedy (and I use the term comedy loosely) Swinging With the Finkels, which played across the U.K. last year and receives a limited U.S. release beginning today, approaches Allen's masterwork in terms of quality but simply that the definition of anhedonia fits Swinging With the Finkels rather well. For those unfamiliar with its meaning, anhedonia is the clinical term for the inability to experience pleasure and trust me, you won't be deriving anything pleasing from this movie that apes all the greater films writer-director-star Martin Freeman obviously loves but doesn't comes close to eliciting even a smile with its cinematic kleptomania.

Freeman, who recently portrayed Dr. Watson in the well-received television miniseries Sherlock Holmes and will star as Bilbo Baggins in Peter Jackson's two-film adaptation of The Hobbit, must hold a special place in his heart for Woody Allen's best films because he certainly tries to imitate them in Swinging With the Finkels. He divides the film with black-and-white-title cards à la Hannah and Her Sisters (even if Woody himself was taking that from Ingmar Bergman's Scenes From a Marriage), there are elements reminiscent of Husbands and Wives and he even goes so far as to film a scene where a couple shares a romantic moment on a park bench against a beautiful sky, only in color instead of black-and-white as in Manhattan. Newman does show that he's doesn't steal from a single filmmaker — he swipes from Rob Reiner's When Harry Met Sally as well (though he's taking more from Nora Ephron's script than Reiner's direction).

Perusing Newman's credits as a writer-director, it would appear that he's also recycling himself because in 2008 he wrote and directed a film called Sex With the Finkels, only it had an entirely different cast though the plot sounds the same and includes characters with the same names such as "Toe Jam Man." If at first you don't succeed, fail, fail again I suppose.

Newman stars in Swinging With the Finkels as Alvin Finkel, (He even had to have a name similar to Allen's character of Alvy from Annie Hall? Oh boy.) who after nine years of marriage with his wife Ellie (Mandy Moore) finds that the spark has seemed to have gone out. Alvin's best friend Peter (Jonathan Silverman) and his wife Janet (Melissa George) are going through similar problems, though they've been wed longer and the introduction of their children into their relationship have dimmed their flame.

The two couples raised several questions for me, namely how Brit Alvin ended up with both an American wife and an American best friend who has a thriving dental practice in London. I assume Janet is supposed to be British though George herself is Australian. There also is the issue of age disparities. Flashbacks imply that Alvin and Ellie met at college and once a picture of Alvin's hairstyle at that time is dated as 1994 (when in real life Mandy Moore would have been 10.) The film never goes to the trouble of saying how old anyone is supposed to be but the 27-year-old Moore is supposed to be in her ninth year of marriage to the 38-year-old Newman whose best friend is the 45-year-old Silverman? Of course, if anything else in the movie worked my mind wouldn't have started wandering to silly details such as these.

Using the black-and-white title cards, most of the film plays as blackout sketches, so there isn't any chance for character development on anyone's part. As a result, the viewer has no vested interested in what happens to either marriage. The movie also can't settle on what type of comedy it wants to be. Occasionally, it aims for more sophisticated types of humor, then it will try to get laughs off drinks with naughty names. When Alvin and Ellie make the decision to interview couples to see if spouse swapping will revitalize their marriage, we get the expected series of silly couples. The only things all the different humor styles have in common is that as scripted by Newman, they all land with a thud. It makes you grateful at times that the musical score by Mark Thomas steps on so much of the dialogue, sparing you from at least some of the bad jokes.

The absolute worst moments come when the film tries to step into material that might be too lowbrow for the American Pie movies. A guest at a New Year's Eve party mistakes cat food for a dip and, when he learns what it is, continues to eat it. Janet carries on a conversation with Ellie while lactating and saving her breast milk into bottles. She asks Ellie if she would like a taste and proceeds to drink some herself.

The movie's low point though has to come when Alvin goes to the airport to pick up Ellie's grandparents, Mr. and Mrs. Winters (Jerry Stiller and Beverley Klein). Ellie thinks that she'll be alone long enough to experiment with self-gratification through vegetables. Guess who arrives home sooner than expected! If you think I'm being too hard on Swinging With the Finkels and visualizing Jerry Stiller getting hit in the nuts with a lubricated cucumber makes you laugh, maybe this is your type of film.

For me, after enduring what has to be one of the longest 85 minute periods of my life watching Swinging With the Finkels, I just felt like bellowing the mantra of Stiller's character Frank Costanza from Seinfeld: SERENITY NOW!