This Time It's War 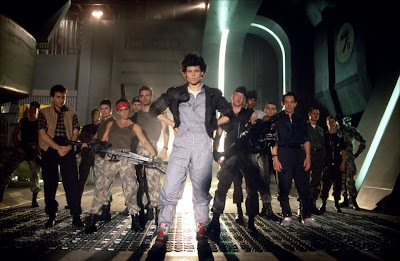 By Damian Arlyn
In 1979, Ridley Scott unleashed one of the scariest, goriest and greatest sci-fi/horror films ever made. Alien was a huge box office hit that turned its virtually unknown lead actress Sigourney Weaver into a major motion picture star and its primary antagonist, an intelligent and extremely deadly creature called the xenomorph, into an iconic figure of nightmares. For years 20th Century Fox had wanted to make a sequel to Alien but it took a 30-year-old Canadian by the name of James Cameron to finally make this a reality. Cameron's resume at the time consisted primarily of special effects work on films such as Escape From New York, Battle Beyond the Stars and Android as well as the screenplay to the hit action blockbuster Rambo: First Blood Part II. His directorial debut (Piranha II: The Spawning) had been a bust but his sophomore effort, a sci-fi thriller called The Terminator which he also wrote, was incredibly successful. Nevertheless, Fox was still taking a bit of a risk turning one of its most potentially lucrative franchises over to such a relatively untried filmmaker. The gamble, however, paid off as Aliens was premiered in theaters 25 years ago today and proved to be one of the most exciting summer movies ever released, a benchmark in the area of special affects and a standard by which Hollywood sequels would be measured for decades to come.

Aliens chronicles the ongoing story of Ellen Ripley, the sole surviving crew member of a ship called the Nostromo which was plagued by a nasty alien critter who systematically eliminated every single one of her companions. At the climax of the previous film, Ripley dispatched the unpleasant baddie and entered hyper-sleep (along with the ship's only other survivor: Jones, the cat) hoping to be picked up in a matter of weeks. As the sequel opens, Ripley is indeed found but soon discovers that it is 57 years later. In the interim, the planet where Ripley's ship picked up the alien had been colonized and Earth has recently lost contact with the colonists. Ripley is sent, along with a unit of tough-talking, ass-kicking space Marines, to investigate the cause where they find, no surprise to Ripley, a whole army of those terrible monsters and one lonely little girl named Newt who has managed to stay alive by avoiding them. Before the film ends, Ripley, Newt, a Marine named Hicks and an android named Bishop manage to blow up all the aliens, escape in a ship and go into hyper-sleep just as Ripley did at the conclusion of Alien.

One of the many things that makes Aliens work so well is the fact that, although it does a fine job continuing the story set in motion by Alien, it is a very different kind of movie from its predecessor. Ridley Scott's film was, first and foremost, a horror story in a futuristic setting. It was an outer space version of Halloween where the mindless, soulless killing machine on a rampage was a horrifying extra-terrestrial instead of a 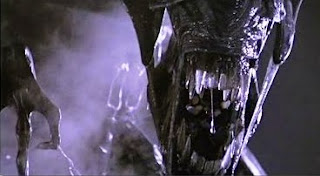 mask-wearing, knife-wielding psycho and the victims were a crew of interstellar truckers rather than a group of doomed horny teenagers. Cameron had the wisdom to understand that while a sequel should provide a similar viewing experience for its audience, it should also be its own wholly distinct product with its own style, vision and set of strengths and weaknesses. Sequels that simply re-hash everything done in the original might make a lot of money, but they rarely become classics. Intent on not just doing a carbon copy of Scott's masterpiece, Cameron decided to go for pure, unadulterated thrills. Thus, by changing the tone, amplifying the action and quickening the pace, Cameron ensured that his film would satisfy moviegoers' expectations for a visceral experience while still establishing his own unique vision. If Alien was the haunted house, Aliens is the roller coaster ride.

The cast is uniformly good. The anchor of the film is, of course, Ripley and Sigourney Weaver manages to instill her with the same hardened, no-nonsense tenacity seen in the first film. Though perfectly willing to 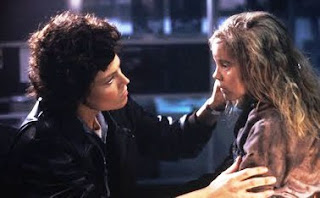 show fear, Ripley always was able to act in the face of incredible danger and that quality serves her well once again. This time around, however, she is allowed some emotional vulnerability in her dealings with the young Newt (played decidedly non-precociously by Carrie Henn), to whom she becomes a sort of surrogate mother. In a scene that was cut from the film's theatrical release (though restored for the home video "special edition"), we learn that Ripley actually has a daughter, who had passed away while Ripley was in hyper-sleep. Apparently Ripley had promised her that that she'd be home in time for her 11th birthday. It is unfortunate that this scene was deleted because not only does it add an extra level of dimension to Ripley's character but it helps to explain the psychology behind the relationship Ripley forms with the orphaned girl.

A pre-Mad About You (and even pre-My Two Dads) Paul Reiser plays the sneaky company executive who plans to bring a live specimen back to Earth — further pushing the concept established in the first film that greedy, power-hungry corporations are willing to sacrifice their own low-level employees — with just the right amounts of charm, odiousness and evil. Lance Henriksen plays the android Bishop with a pitch-perfect unemotional demeanor and yet seems to have even more warmth and humanity than Reiser's cowardly villain (he also has one of the film's best scenes involving a table, a hand and a knife). The rest of the cast is basically comprised of the Space Marines. It's very easy in a "combat" picture to make all the characters look and sound so alike that they are virtually indistinguishable, but Cameron and his actors avoid that trap here by giving each grunt his/her own distinct look and personality. The ones that stand out most in the memory, however, are probably Hicks, played by The Terminator's Michael Beihn (who was a last-minute replacement), the buff but sexy Vasquez (Jenette Goldstein) and the comically afraid, though at times somewhat annoying, Hudson (Bill Paxton) who spends most of the film complaining and freaking out. If there is one weak spot in the film, he would be it.

Though it still was relatively early in Cameron's career, many of the elements and themes that would characterize much of his later work were already beginning to take shape in 1986 and can be found in Aliens. Firstly, his dependence (and some would say over-dependence) on technology. Not only do all of Cameron's 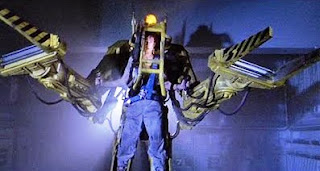 films push the boundaries of special effects techniques, but all seem to focus to a large degree on hardware, machinery and industrialization (even the period piece Titanic spends an awful lot of its three-hour running time discussing, debating, and exploring the mechanical inner-workings of the ship itself). One of the film's most memorable set pieces is the climactic battle between the queen alien and Ripley. Forgetting for a moment that this particular piece of equipment would make a noticeable re-appearance in Avatar, the image of the all-too human Ripley engulfed in the massive power-loader serves as a perfect symbolic representation for Cameron's ruminations on the progressive fusion of man and machine. It also provides the film with one of its most iconic pieces of dialogue ("Get away from her, you bitch!"). I didn't see Aliens in the theater as I was too young (although it did become the first R-rated film I ever watched on video), but I suspect that line was probably greeted with thunderous applause.

Furthermore, his environmental conscience, though not as heavy-handed as it is in films like Avatar and the special edition of The Abyss, is nonetheless present. It's no stretch of the imagination to speculate that had humans never attempted to explore and/or inhabit the alien's planet to begin with, none of the tragedies seen in any of these films would've ever happened. Finally, his simultaneous worship and criticism of the military. There is little doubt that Cameron admires the Marines in the film and yet, despite their excessive boasting, their inability to perform is highlighted even more by Ripley's extreme competence. By the time Cameron gets to Avatar, the military have flat-out become the bad guys.

Aliens went on to gross more than $85 million at the box office and actually earned, among other categories, an Academy Award nomination for best actress (a rarity for that genre of film). Weaver may not have walked away with the statuette, but the film itself won best visual effects and best sound effects editing. Many have even hailed it as one of those rare Hollywood sequels that actually surpasses its original. I personally don't agree with that as I think both films are equally excellent for the kinds of movies that they are trying to be, but whether you prefer Scott's dark, disturbing scarefest or Cameron's raucous, intense thrill ride, Aliens certainly remains endlessly exciting and thoroughly entertaining to this very day. It also, for better or for worse, helped cement James Cameron as a force to be reckoned with in the motion picture industry.

Comments:
Great post! I wrote a bit on Ripley as Gaia here:

I don't think Cameron has come to hate the military, I think he's come to hate it's more extreme elements. Many of the military folks in Aliens are drawn sympathetically and any that were not drawn that way to start with are given a chance to redeem themselves on their way out. Hudson, who was little more than a whiny pain in the ass for most of the film doesn't run when the chips are down, he to goes out in a blaze of glory. Even Gorman who started out as hopelessly inept finds the courage within himself to go back and attempt to rescue Vasquez, even though she had wanted him dead earlier. In Avatar I think his central thesis is that 'adapting to conditions on the ground' does not just mean putting on rain gear if it's raining. A military that isn't nuanced in its handling of complex situations will be ineffective and more often than not seen as bad by everyone.