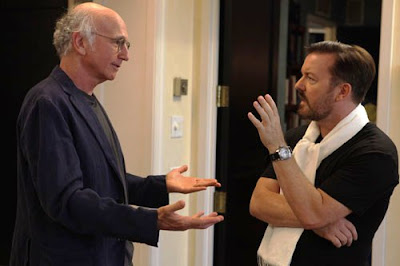 By Edward Copeland
If you are as big a fan of Larry David and Curb Your Enthusiasm as I am, your excitement probably has nearly reached its boiling point with its eighth season premiere about to debut Sunday night on HBO at 10 p.m. Eastern/Pacific and 9 p.m. Central time. Imagine how frustrated you would be if you were lucky enough to be sent a preview DVD of three of this season's episodes, except they aren't the first three episodes. They are the third, the fifth and the ninth out of the season's 10-episode run. Since David always tends to have an arc that spans the entire season, how could I in good conscience watch episodes out of chronological order? As much as the DVD tempts me, I can't give in. I did get a release describing the first two episodes and the fourth and I know this season will take Larry to New York for much of the season, but I don't know much beyond that.

From the release, despite the ending of season 7, it doesn't sound as if a Larry and Cheryl reconciliation looms on the horizon. Many of the best guest stars of the past will be turning up again this year including Richard Lewis, Wanda Sykes and the greatest discovery of recent years, J.B. Smoove as Leon. Some of the big names making appearances on season eight, which I didn't realize until I read the release makes Curb the longest-running comedy or drama in HBO history, are: Bill Buckner, Michael J. Fox, Ana Gasteyer, Ricky Gervais, Michael Gross, Harry Hamlin, Larry Miller, Aida Turturro, Mookie Wilson and Jo Anne Worley.

Since I can't cite specifics of what's to come this season, thankfully HBO has uploaded previews onto YouTube to provide some glimpses in case you haven't seen them already. First, their season 8 trailer.


They've also aired a brief "Invitation to the set."


I had thought about trying to do a list of my 10 favorite Curb episodes so far, but since my friend Matt Zoller Seitz is doing a slideshow of his at Salon, I didn't want to appear that I was copying. I started perusing YouTube for favorite moments and I just grabbed a few by virtue of what was available.


Second, just one brief clip from the classic second season episode "Trick or Treat," which had so many funny things going on that every scene was a winner.

Finally, the hysterical season three closer "The Grand Opening" that was one of the memorable nights of funny television, starting with The Sopranos' fourth season episode "The Strong, Silent Type" that started with a zonked-out Christopher accidentally sitting on Adriana's dog and then had the gangsters stage their version of a drug intervention. When I'd stopped laughing at that, we get to Curb with the restaurant finally opening with Paul Sand as the French chef with Tourette's. This was the climax, with Larry saving the day.


Now, I just have to wait until Sunday night and see what Larry, after trying to do a new TV show, open a restaurant, star on Broadway, learn if he was adopted, decide whether to donate a kidney, take in a family made homeless by a hurricane and have his wife leave him and concoct a Seinfeld reunion to try to win her back, has in store for us next. I'm sure it will be prettty, prettty good.

Of course, next week will be the real heartbreaker: New Curbs will air opposite the long-awaited fourth season of Breaking Bad.

Some candidates for my favorites:

Leon and Larry talking about interview tactics ("Go topsy-turvy on that motherfucker.")

Leon and Larry talking about his need for "no fly zone" underwear, and the great nickname Leon gives Larry.

Larry and Richard Lewis helping the blind man move in.

Larry singing West Side Story in his car, only to have his neighbors mistake lyrics from Officer Krupkee as profanity.

And anything involving Funkouser (especially when he crashes the table read in season 7).

Anyway, I'm really looking forward to this and your in-depth reviews. I can't wait for tomorrow!

I forgot a big moment...one of my all time favorites:

How could I forget Krazy Eyes Killa??!! ("Are you my Caucasian? You are...you're my Caucasian!")

One of my many other favorites was The Benadryl Brownie when Lewis is dating the Christian Scientist who won't take medicine to get over her allergic reaction to eating nuts but has a repairman over to fix the TV and Larry asks why she doesn't just pray for God to heal the TV too. I doubt I'll do weekly recaps for Curb -- it's harder to do meaningful recaps on a sitcom, though I may be attempting to do recaps on Breaking Bad. It won't be anywhere as elaborate as my Treme recaps got. I'm lucky I survived.

I love that episode. Bummer about no recaps. I might try my hand at doing some TV recaps for Curb on my site. We'll see, though. I am going to start watching Treme this summer, and I'll make sure to have your recaps handy.