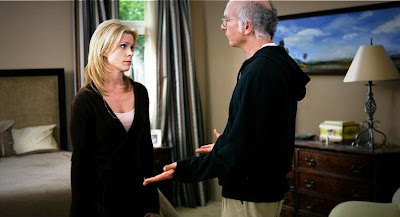 By Edward Copeland
Usually, HBO waits awhile to release the DVD sets of one of their series' most recent seasons, but thankfully they got season six of Curb Your Enthusiasm out fast, since I only got to see the first four episodes before my evil cable operator banished HBO to the digital ghetto where I couldn't get it. It was worth the wait though, because after a weak season five, Larry David was mostly back on track for the entire sixth season.

Except for its finale, season 5 of Curb Your Enthusiasm was a bit of a disappointment. The formula started to prove more predictable than the laughs it might generate. For the most part, season 6 really revitalized the show and (SPOILERS AHEAD IF YOU HAVEN'T SEEN SEASON 6) even managed to come up with a truly surprising season capper that seems completely out-of-character for such a cynical series.

The main arc of this season involved the Davids taking in a family of African-American hurricane evacuees and, as in the past, some of the best and most uncomfortable humor on the series has stemmed from the interaction of Larry with African-American characters. Though all the performers playing the family (named the Blacks) are good, especially Vivica A. Fox, the standout from a hilarity standpoint is the character of Leon (J.B. Smoove), who becomes a hysterical partner-in-bad ideas with Larry.

Also continuing to prove strong is the willingness of other celebrities to play themselves in an unflattering light. In many respects, Ted Danson's version of Ted Danson on Curb Your Enthusiasm may be his best performance ever. The supporting cast of characters have grown into solid laugh riots as well (though I missed not having any Wanda Sykes appearance this season), especially Bob "Super Dave" Einstein who has turned his role as Marty Funkhouser into an absolute deadpan delight. Of course, if you are really in a jam, all you have to do is wind Susie Essman up and watch her go.

If Curb does have a weakness other than the tendency to know how its formula will unwind throughout the half-hour, it's when it casts recognizable actors into character roles. This is especially the case this year with appearances by Tim Meadows and Michael McKean. When you first see them, you assume they are playing themselves, but once you realize they aren't, it's sort of broken the spell. Now is when the spoilers really come into play, so you've been warned again.

The highlight of this season is the decision (some could say long overdue) of Cheryl David (Cheryl Hines) to leave Larry once and for all. The divorce of the real-life Davids made this idea look probable, but unlike the real-life breakup, the straw that breaks the TV couple's back is an inspired one that only Curb would try to pull off.

This also leads to the most hopeful surprise ending that the series has ever attempted, where it appears as if Larry has found happiness in the most unlikely of places and ways. If there is a seventh season, I'll be curious how they move this story twist forward.

Comments:
Whether they carry forward the finale into season 7 is irrevelant. Those final 60 seconds of season 6 rank very high with the greatness factor- so much so that I sat up and rewatched those vignettes over and over, laughing more and more each time. David has always fashioned terrific finales, but this one trumped the others. And you're spot-on about Leon. "You gotta get up in that ass, Larry. Tear it open and walk inside." Genius.

I agree on the ending, especially getting to see Susie on the receiving end of a dressing down.