It's All in the Reflexes 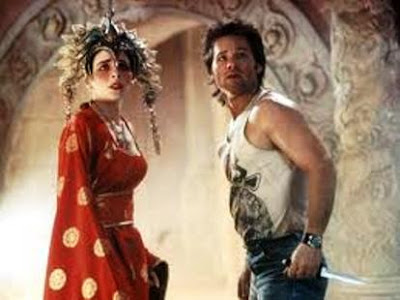 By VenetianBlond
Today we celebrate the 25th anniversary of Big Trouble in Little China, a movie that made little impact in theaters but now evokes a certain nostalgia in those of us who watched it repeatedly on VHS or on Sunday afternoon cable TV. Directed by John Carpenter and starring Kurt Russell, Kim Cattrall, and Dennis Dun, it’s an action-adventure-comedy-kung-fu-creature feature-romance set in San Francisco’s Chinatown.

Russell’s Jack Burton is a blowhard of a truck driver who gets entangled in a Chinese mystery when his best friend Wang’s (Dun) fiance Miao Yin is kidnapped just as she’s disembarking from her flight from China. It seems there’s a robust sex slave trade being combated by activist attorney Gracie Law (Cattrall). Burton, Wang, Cattrall, and eventually Egg Shen, the good-guy-sorcerer, go to the brothel where they think Miao Yin is being held. The rest of the film is an extended chase scene punctuated by kung-fu battles and magical set pieces. Lo Pan, a 2,000 year old cursed spirit, must marry a green-eyed girl to become flesh again, and both Miao Yin and Gracie have green eyes.

After being given a studio script that was completely overhauled from its original form as a Western, Carpenter knew he needed to bring in an actor with some box office heft to sell a virtually inexplicable film. He and Russell had worked together for 1982’s The Thing, although the studio hemmed and hawed on that casting. Once Clint Eastwood and Jack Nicholson (seriously?) proved unavailable, Russell was given the job. Unfortunately, Russell did not prove to be as much of a draw as was hoped, and the experience soured Carpenter on working on studio projects entirely so he returned to independent filmmaking.

Part of the problem is that the characters are actually characterizations. Burton is a John Wayne Lite who has a high opinion of himself and is just as likely to get conked on the head as he is to strike the fatal blow. Wang is channeling a 1940s motormouthed gangster, and Gracie is a breathless ingénue with nerves of steel in the Scarlett O’Hara mode. In addition, it was a martial-arts film before the big wave of popular martial-arts films hit the U.S. so mainstream audiences didn’t quite know what to make of it. 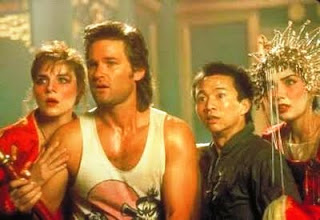 However, Carpenter’s filmmaking vocabulary was quite precise and he kept control of the pace and tone throughout. From visual jokes like Jack perpetually bringing a knife to gun fights to his heroic and completely phony line, “OK. You people sit tight, hold the fort and keep the home fires burning. And if we're not back by dawn…call the president,” the action is 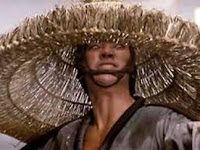 punctuated by humor and self-awareness. It makes sense, because Jack Burton himself is completely self-aware. He does and says what he does to make himself look like the built-up ideal of himself in his mind. Carpenter also directs the action well, keeping a coherent through-line as well as identifying the good fighters, emphasizing different techniques, and generally keeping a sense of urgency throughout each fight. This is not to say he doesn’t also give the chopsocky style bulgy-eyed staredown its due, but even with the directorial winks, the stakes of each battle are clear. 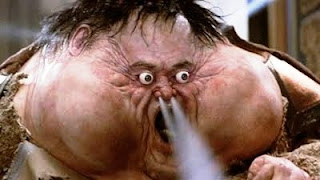 Where Carpenter really excelled was in the effects and the monsters. Jack and Wang must swim through the “Hell of the Upside-Down Sinners” and the submerged and rotting corpses drift in front of our heroes and the camera just right. Toward the end, once the “big boss” is defeated, one of his minions puffs up and explodes. Literally. One of the creatures shows up in a fantastic little postscript at the end of the film but it’s not gratuitous. It’s Carpenter saying that there’s still crazy stuff out there, so you had better always be on your guard.

I generally like Kurt Russell’s acting, but I love his Jack Burton. There’s the level of player and blowhard, but he also shows how Burton is so completely out of his element. He manages to fire a round into a bad guy and is completely surprised that it worked. I don’t know whose idea it was, but after rescuing Gracie and laying a big kiss on her, he walks into the next battle with her lipstick smeared all over his mouth and teeth. The real hero is Wang, the apparent sidekick who has right and honor on his side as well as the mad kung-fu skills.

Big Trouble in Little China is entertainment, first and foremost, that manages to use action tropes while joking about them at the same time. I’d posit that few action films from the 80’s have aged as well, even given Kurt Russell’s acid wash jeans.

Comments:
Great, insanely quotable film! While it is probably not Carpenter's best film it is the one I watch the most frequently and never tire of no matter how many times I've watched it. Amazing that it's 25 years since it grace the big screen. I think that the reason it has aged so well is that in many respects it was a film ahead of its time - anticipating the fascination with Hong Kong action films in the 1990's and playing around with the conventions of the 1980's action film.

I'm with J.D. on this. Ahead of its time, quotable to the max, a Kurt Russell performance that it so damn enjoyable, and John Carpenter showing he could combine action, comedy, and aspects of fantasy most U.S. audiences had never seen into something we're still talking about 25 years later. All of the Kurt Russell/John Carpenter collaborations are pure gold -- as time has proven. Fine celebration for a film I and a boatload of others still love. Thanks.