By Damian Arlyn
Brian De Palma is one my favorite directors. Very few other filmmakers (with the possible exception of Dario Argento) are able to fashion products of such sinister, surreal beauty filled with such colorful, hallucinatory imagery and captured by such gracefully balletic camerawork. De Palma's films create a reality that is uniquely theirs. The environments, characters and events depicted in them might resemble our own, but there is always something missing; some subtle, intangible quality that prevents them from sharing our own existence and instead ensnares them in the realm of dreams (which often prove to be nightmares). The places — be they famously celebrated or exceedingly ordinary — seem strangely distant, the characters are more like projections of people rather than flesh-and-blood human beings and the events that transpire always seem like impeccably choreographed and flawlessly executed dance routines rather than the messy, chaotic incidents to which we are so accustomed. De Palma's stories do not take place in the real world. They take place in a world of breath and shadow, where everything appears just slightly out of reach. Many have criticized his work for these characteristics, but I revel in it. De Palma's films are pure cinema and one of his most archetypal creations (not only because it IS cinema but because it is ABOUT cinema) is the exquisite paranoid suspense-thriller Blow Out, which celebrates its 30th anniversary today.

It is far too dismissive of Blow Out to call it an homage to Antonioni's similarly-themed (and similarly-titled) Blow-Up or a tribute to that master of suspense Alfred Hitchcock (of whom De Palma is often accused not only of imitating but of blatantly ripping off). It's also too easy to attribute the film's inspiration to other paranoid-conspiracy films from that era (such as Francis Ford Coppola's The Conversation or Alan J. Pakula's Parallax View) as well as various references to the JFK assassination, Watergate scandal and Chappaquiddick. Yes, those influences are clearly there but Blow Out uses these sources as a springboard from which it can 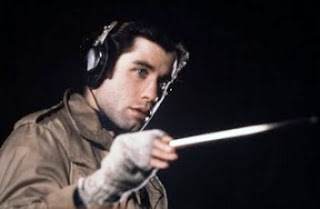 launch into its own distinct, visionary manifestation of the director's own fears, passions and prejudices. A perfect example of this is the film's first five minutes. Blow Out opens with an extended hand-held shot of a psychotic killer stalking the scantily clad members of a typical horror movie sorority. As ominous heavy breathing (and quintessentially cheesy, dated "scary" music) pounds away on the soundtrack, the murderer pulls back a shower curtain to reveal a beautiful young girl who looks into the camera and screams…very badly. A sudden cut reveals John Travolta sitting in a screening room laughing as he lights a cigarette and remarks "God, that scream is terrible." Thus we discover, in a very entertaining manner, that the movie we've been watching is actually a movie within a movie. What was perceived as reality is, in fact, a lie. It is the first in a series of deceptions that the film will throw at us. Furthermore, by shooting the entire opening sequence in POV, De Palma cleverly implicates the audience in an act of voyeurism, another major subject of the film (and many of his films). Finally, Jack's first line of dialogue, in which he derisively comments on the scream in the picture he's watching, carries special significance as it will parallel his last line of dialogue in the film. The credits haven't started and already the movie has introduced several of its major themes.

It is also our initial introduction to the film's main character, the sympathetic but complex Jack Terry (played by John Travolta in one if his best performances). Jack is depicted as a very competent soundman who, because of a guilty conscience, has wasted his skills on a series of low-budget exploitation films since a mistake of his cost an undercover police officer his life several years earlier. Jack may be courageous and heroic in his attempts do good and see justice happen, but his cynical distrust of the state and his borderline obsessive desire to see truth come out causes him to make some serious errors in judgment. It was a brilliant decision on De Palma's part to make Jack a filmmaking technician because not only does it serve a storytelling purpose (namely, providing him with a plausible reason to witness and record the car accident of which he has the expertise to recognize as an assassination), but it provides De Palma an opportunity to engage in some artful meta-cinema. More than perhaps any other of De Palma's protagonists, Jack seems to embody the cinematic alter-ego of the director himself.

Joining Travolta is an impressive array of actors, many of whom would become De Palma regulars. The lovely Nancy Allen plays Sally, the call girl who was in the car with the governor when it went off the road. Despite the fact that she was married to De Palma at the time and had already acted in two of his previous films, her casting was actually a recommendation by John Travolta (who had worked with her and liked her in De Palma's Carrie). Though her character is hopelessly — almost unbelievably — naive, Allen plays her with such an endearing sweetness that her eventual fate is heartbreakingly tragic. As the film's primary villain — a ruthless, sociopathic killer named Burke — John Lithgow (Obsession, Raising Cain) is frighteningly menacing and leaves a strong, lasting impression on the viewer. In fact, Lithgow tells a funny story of how a woman from the apartment building he was living in at the time the movie came out saw him getting out of an elevator one night and immediately turned white as a sheet. Finally, Dennis Franz — who also appeared in The Fury and Dressed to Kill — has a small but amusing role as a sleazy, cowardly photographer who works with the Sally character to blackmail unfaithful husbands.

De Palma films are usually technically flawless and Blow Out is no exception, but in this particular effort the style does not, as it has a tendency to do sometimes, overshadow the content. It only elevates it. The cinematography by the great Vilmos Zsigmond is stunning. The visual flourishes that are used (360's, split-diopters, overheard shots, low-angles shots, split-screens, slow-mo, etc.) positively captivated me when I first saw it. Though I would later learn that these were common tricks employed by De Palma, to this day they never fail to excite me when I see them in a movie. Also, the score by frequent De Palma-collobrator Pino Donaggio is quite evocative. The theme Donaggio wrote for Jack and Sally's relationship is a memorably haunting, sweet and sad piece of music. In fact, Quentin Tarantino (an admitted fan of the film and De Palma in general) used it briefly in a scene in Death Proof.

When it was released in 1981 Blow Out received generally positive reviews. Some critics (including Roger Ebert and the always-supportive-of-De Palma Pauline Kael) even wrote some enthusiastic ones. However, the film failed to perform at the box office. Fortunately, over the years Blow Out has gained far more respect and appreciation. It was even recently added to the immortal Criterion Collection. Personally speaking, I love Blow Out and always have. I consider it to be Brian De Palma's most perfect film. I had never seen a De Palma movie at the time I first watched it as a teenager, so I not only found its story engaging, suspenseful and moving but I was absolutely entranced by its style. What I also didn't appreciate at the time was how the visual language of a film could not only be used to tell a story imaginatively, but actually communicate specific ideas/concepts to the audience. I remember getting a book from the library shortly thereafter on the films of Brian De Palma and reading in the chapter on Blow Out about one specific shot where the characters Jack and Sally are standing in the foreground conversing while two train station marques are positioned in the background directly over their heads. On each marquee a destination is written: "Crusader" is behind Jack and "Wall Street" is behind Sally. The book was proposing that these destinations each represented the characters' personalities and function within the story. That idea just blew my mind. It revealed a whole new realm of possibilities to me in the art of film analysis and criticism. I became far more aware of what I was actually seeing on screen whenever I watched a movie from that point on. Blow Out was a seminal work in my development as a cinephile. Along with a handful of other films (including Star Wars and Schindler's List), Blow Out opened my eyes to the incredible potential of cinema.

It also has a really good scream. 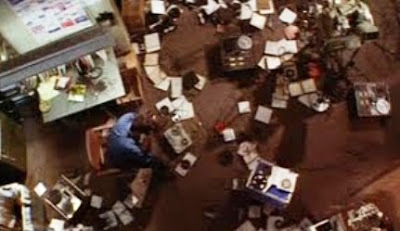 Comments:
I'm not a big De Palma fan, but I agree that Blow Out is by far one of his best efforts. Too often he seems to think up two or three good sequences for a film and tends to blow off the rest of the movie. It's been a long time since he made a movie I liked much at all, maybe The Untouchables, but that doesn't seem like a De Palma film.

THE UNTOUCHABLES and MISSION: IMPOSSIBLE feel like De Palma films more in terms of style than content, because he was essentially the director-for-hire on both projects.S till, I love them both. You are right, though, about his films usually having two or three standout sequences in them: in UNTOUCHABLES the POTEMKIN-inspired train station shootout and in MISSION: IMPOSSIBLE the TOPKAPI-inspired white room heist. They've always been major selling points in De Palma movies because ha elavishes so much care on them that they feel like their own mini-movies. What makes BLOW OUT so good, I think, is that the whole movie feels that way.

The example I always think of is Carlito's Way where he has the sequence in the pool hall and the chase through the subway station and except for the seduction through the doorway and Sean Penn's fun but goofball performance, the rest of the movie is a mess.

There's also the slow-mo escape from the institution in THE FURY, the museum seduction and elevator murder from DRESSED TO KILL, the climactic revenge scene from CARRIE and the split-screen murder and clean-up from SISTERS.

As a whole though, I think Sisters and Carrie are two of his better ones. I've actually never seen The Fury but I've always thought Dressed to Kill was such a campy, overblown Psycho homage/ripoff I could never take it seriously. He even translated Simon Oakland's awful speech at the end of Psycho into Keith Gordon's explanation of the mecchanics of a sex change operation.

De Palma is one of my least favourite directors. But Blow Out is fabulous. Partly because it's more disciplined than the rest of his films. Sequences seem to be built around advancing the plot at least as much as they are an excuse to spin the camera around people in circles.