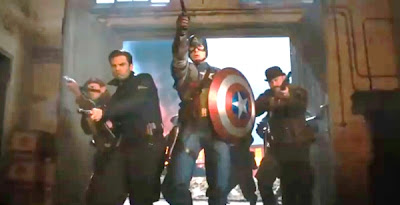 By J.D.
The popular comic book superhero Captain America had his debut in March 1941 courtesy of Joe Simon and Jack Kirby who created him as a patriotic symbol in response to the actions of Nazi Germany leading up to the United States’ involvement in World War II. Like any enduring comic book icon, Cap has undergone all kinds of changes over the years but has had few cinematic incarnations. He first appeared on film in a 1944 serial and then in a 1990 film that was so ill-conceived that it was released direct to home video in North America. One problem with the character is that his costume did not translate well to a live-action film. It didn’t help that at the time of the 1990 version, Marvel Comics, which owned the character, had little interest in cinematic adaptations of its titles until X-Men (2000) proved to be a surprise hit.

Since then, they’ve had a spotty track record with their properties. The Blade and Iron Man series were very successful but both Daredevil (2003) and Ghost Rider (2007) were box office and critical failures respectively. Part of the problem is the talent attached to these films. Getting the right director and cast that understand the characters and the worlds they inhabit is crucial and explains why the first two X-Men films were so good. For Captain America: The First Avenger (2011), the powers that be wisely hired Joe Johnston to direct. Since it was decided to set the film during World War II, who better to recapture that old school action/adventure vibe then the man who helmed The Rocketeer (1991) and Hidalgo (2004)? For the pivotal role of Captain America, Chris Evans was cast. He already had experience with superhero films playing the Human Torch in the awful Fantastic Four films and, as a result, was understandably reluctant to take on another comic book adaptation. The question remained, how would such an earnest, idealistic character translate in our cynical times and would moviegoing audiences be able to relate to him? Judging by its opening weekend box office haul, quite well indeed.

Steve Rogers (Chris Evans) is a skinny weakling who just wants to do his part for his country during wartime but he’s wracked with too many health problems to join the Army. So, he volunteers for a risky top-secret experimental program known as Project Rebirth run by Col. Chester Phillips (Tommy Lee Jones at his crusty, ornery best) and Peggy Carter (charmingly played by Hayley Atwell). Rogers may not be physically strong but he’s brave, determined and willing to sacrifice himself for the greater good. Dr. Abraham Erskine (Stanley Tucci) and Howard Stark (Dominic Cooper) conduct the actual procedure that transforms Rogers into the perfect physical specimen, a Super Soldier complete with superior strength and agility.

Instead of putting him on the front lines where he wants to be, Rogers dons a corny costume (that pokes fun at previous cinematic incarnations), gets dubbed Captain America and is ordered to sell war bonds to the American public in a lame dog and pony show. While entertaining American troops in Italy, he hears that his best friend Bucky Barnes (Sebastian Stan) has been captured by Hydra, a research wing of the Nazis that is so ambitious that it split from the Germans for playing it too safe. With Peggy and Stark’s help, Rogers disobeys orders to rescue his friend and 400 prisoners of war. Meanwhile, Hydra leaders Dr. Arnim Zola (Toby Jones) and Johann Schmidt (Hugo Weaving) have discovered the Tesseract, a cosmic cube endowed with powerful magical energy that they harness so that it can be used to not only win the war but also take over the world. Schmidt was the first recipient of the Super Soldier formula and it transformed him into the Red Skull, a hideous-looking evil genius.

Hugo Weaving brings a suitably creepy menace to the role of the power hungry Red Skull aided in large part by the impressive and appropriately garish makeup job. Hayley Atwell is downright delightful as the brassy dame Peggy Carter who is more than capable of taking care of herself. The chemistry between her character and Rogers is nicely realized with snappy, slyly flirty dialogue reminiscent of a Howard Hawks film. The screenplay, written by Christopher Markus and Stephen McFeely, does a nice job of developing their relationship over time, keeping their romance simmering just beneath the surface for most of the film until its tragic conclusion that carries a surprising emotional resonance because we’ve become invested in them. After all kinds of supporting roles over the years, Chris Evans finally gets to prove that he has the chops to carry a big budget blockbuster. He brings a no-nonsense charisma to the role and conveys Cap’s idealism without coming across as forced or phony.

Joe Johnston brings the same old school classic Hollywood vibe he brought to The Rocketeer complete with a refreshing lack of cynicism and irony as he delivers a straight-forward action/adventure tale. And like with that previous film, he includes all sorts of nice comic book touches, such as the introduction of the Howling Commandos, a ragtag group of soldiers that fought alongside Nick Fury in the comics and fight with Cap in the film. In particular, the actors who play Dum Dum Dugan (Neal McDonough) and Gabe Jones (Derek Luke) bear an uncanny resemblance to their comic book counterparts right down to how they look and act. Unlike Zack Snyder (Watchmen), who imposes too much of his personal style, Johnston understands that the film’s style should service the story — anything else is a distraction. He even employs Snyder’s trademark “speed-ramping” technique but in a way that fits seamlessly with the action sequences, which are exciting and expertly choreographed, devoid of schizophrenic editing. You always know who is fighting whom and where. Captain America is quite simply a flat-out entertaining film.

Comments:
I couldn't have agreed more. I really enjoyed it. Did you stay for the stinger at the end? Fine review, J.D.

Thanks. I sure did. Man, that trailer at the end was pretty tantalizing. I am highly anticipating Joss Whedon's take on the Marvel universe. Should be interesting.