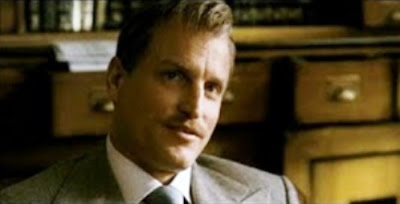 By J.D.
After dabbling briefly with a major studio on the debacle that became known as Dominion: Prequel to the Exorcist (2005), writer/director Paul Schrader returned to the relatively safe confines of the independent film scene with The Walker (2007). This film continues his fascination with loner protagonists ostracized by their profession as examined in American Gigolo (1980) and Light Sleeper (1992), or by their worldview as in Taxi Driver (1976).

Carter Page III (Woody Harrelson) is a popular socialite who works as a confidant, companion, and card player to the wives of politicians in Washington — a professional “walker,” a term coined for Nancy Reagan’s companion when she was First Lady. Carter is the epitome of the Southern gentleman. He plays a weekly card game with three women as they gossip and tell stories complete with salacious details about the denizens of Capitol Hill. Carter is finely groomed and impeccably dressed with only the finest suits, living in a beautifully furnished place.

With the stories Carter tells his dates, he hints at a rich backstory but he is careful not to reveal too much about himself. While waiting for Lynn Lockner (Kristin Scott Thomas), one of his dates, to meet up with her lover, she comes back in shock. Her lover is dead and she asks Carter to keep the incident quiet. Of course, he decides to get involved (he knew the victim). Carter used to trade in juicy gossip and now he has become the subject of it.

It doesn’t help that he lost considerable money on an investment that the victim advised and this gives the socialite a motive. As a result, he decides to investigate the murder using his own insider contacts and uncover a few dirty secrets that people in positions of power don’t want revealed. His efforts to clear his name become more urgent once the Feds apply pressure thanks to a particular nasty agent (William Hope). Pretty soon, events conspire against him and Carter becomes the prime suspect. 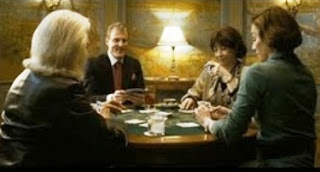 Woody Harrelson disappears into the role affecting a flawless accent and does an excellent job with Schrader’s witty dialogue and distinctive cadence. Every few years between amiable comedies Harrelson gets a juicy dramatic role to sink his teeth into and showcase his acting chops: Natural Born Killers (1994), The People vs. Larry Flynt (1996), and now this film. Schrader’s screenplay, as you would expect, snaps and pops, especially the scenes where Carter and his companions banter and gossip. It doesn’t hurt that he has the likes of Lauren Bacall, Lily Tomlin and Kristin Scott Thomas delivering it.

The Walker is a fascinating inside look at a subculture that exists in Washington under the auspices of a murder mystery. It shows to what lengths politicians will go in order to protect themselves and their dirty secrets. Schrader has crafted a smart thriller with interesting characters that is driven by a well-plotted story and not a bunch of noisy, hastily edited action sequences.