The Ring Ain't The Thing, THE THING Is The Thing 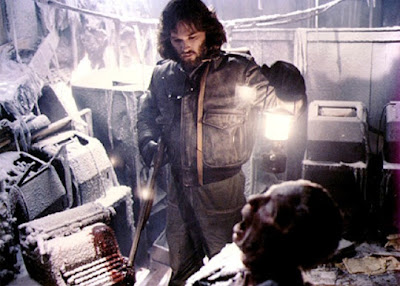 Para·noia
Etymology: New Latin, from Greek, madness, from paranous demented
1: a psychosis characterized by systematized delusions of persecution or grandeur usually without hallucinations;
2: a tendency on the part of an individual or group toward excessive or irrational auspiciousness and distrustfulness of others


And hell yes, if nothing else, 1982's The Thing provides its audience with a present and ever-growing sense of hopeless isolation, fear and, above all things, paranoia.

We begin with a happy little Husky, running in the snow as synth music plays, heading to the American research station in Antarctica, chased by a big mean helicopter with grenades. The friendly dog hops up on an American scientist only to be shot at by a crazed Norwegian. The Americans defend their base from the Antarctic invaders and wisely investigate the Norwegian camp for clues to the madness. There they find evidence, not only of mutated humans, but potentially an invasive alien race. 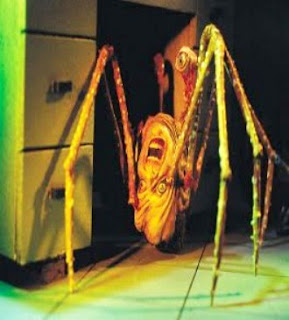 A simple teaser, but The Thing is an intense and incredible film for several reasons. First of all, for all you gore fans, the monsters are freaky gross, intensely original and if I may quote myself, "It's not CG, it's real effin' LATEX. For God's sake why can't the industry figure out that it's better!? Nearly 30 years later and CG can't compete with this!" Roger Ebert was quoted as saying that it was, "among the most elaborate, nauseating and horrifying sights yet achieved by Hollywood’s new generation of visual magicians." The horror effects, in short, truly are horrendous. Now for those of you who are more the queasy sort, or who don't put much stock in the visual stuff to give you your thrills, I'll quote my Armenian guest who saw this for the first time, "The latex aliens were cool, but they didn't have to be because it wasn't a movie that had to rely on special FX as a crutch. The aliens could've been anything, they were just background to how the humans interacted with each other."

The second reason The Thing is the thing is the completely immersing mood that is set from the first act until the final shot. The script is written in a very logical fashion, and the question of the nature of the creature they're dealing with, as well as the nature of the humans it might be inhabiting, churns in one's stomach in such a way as to make the suspense genuinely off-putting. What sets The Thing apart is is how it so perfectly captured the intense paranoia that comes from being able to trust absolutely no one.

Now for those of you who think that John Carpenter just isn't your cup of tea, well I can concur that Dark Star, Vampires, Ghosts Of Mars and maybe even Escape from New York might not put a casual viewer on a solid footing for this one. Carpenter's not my favorite director either, but I can put my stamp of approval on The Thing as being his best work to date with the Masters of Horror short film "Cigarette Burns" coming a close second.

Comments:
While I agree that The Thing is one of the best things that Carpnter has made, I still go with the original Halloween as his masterpiece.

HALLOWEEN is a great film to be sure but I think that THE THING just edges out for sheer audacity. But you've also got an air-tight script, a solid cast of character actors and Ennio Morricone's menacing minimalist score amazing. I also really love the cinematography. Carpenter gets a lot of out his claustraphobic environment which only feeds on the increasing feelings of paranoia among the characters.

The Thing works so well as a horror film because it has scary-as-hell visuals, a very tense and creepy feel, and a big mystery to the whole plot as you don’t know who’s infected and who isn’t. John Carpenter really hit the jackpot on this one, too bad it didn’t do so well back then. I wonder if the prequel will be any better. Good Review!

"Cigarette Burns" is better than Halloween, Assault on Precinct 13, They Live, Starman or Big Trouble In Little China? I respectfully disagree. However, you'll have no argument from me on The Thing's greatness.