It's Not the Age, It's the Mileage 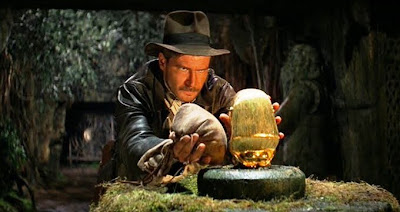 By J.D.
There’s no disputing that Raiders of the Lost Ark, which opened 30 years ago today, is one of the greatest action/adventure films ever made, featuring some of the most memorable action sequences ever put on celluloid. Who can forget part-time archaeologist, part-time adventurer Indiana Jones (Harrison Ford) outrunning a giant boulder at the beginning of the film? Or the exciting gun battle in a Nepalese bar? Or Indy being dragged behind a truck full of Nazis? However, the older I get, the more I appreciate the quieter moments in Raiders — the downtime between action set pieces. These scenes convey exposition and develop the characters. The credit for them working so well should be given to the film’s screenwriter Lawrence Kasdan, who also wrote the screenplays for such noteworthy films as The Empire Strikes Back (1980), Body Heat (1981), The Big Chill (1983) and many others. He’s written some of the best scripts ever committed to film and knows how to write witty dialogue and create engaging characters.

Kasdan’s ability to engage us in the obligatory exposition scene is evident early when Indy and his friend Marcus Brody (Denholm Elliott) meet with two military intelligence officers about the location of an old colleague of Indy’s — Abner Ravenwood — who might have an artifact — the headpiece of the Staff of Ra — that will reveal the location of the Ark of the Covenant, which the Nazis are eager to get their hands on. Indy and Marcus give the two men a quick history lesson on the Ark and its power. Marcus concludes with the ominous line about how the city of Tanis, that reportedly housed the Ark, “was consumed by the desert in a sandstorm which lasted a whole year. Wiped clean by the wrath of God.” The way Denholm Elliott delivers this last bit is a tad spooky and is important because it lets us know of the Ark’s power, his reverence for it, and why the Nazis are so interested in it. This dialogue also gives us an indication of the kind of danger that Indy is up against.

This segues to a nice little scene right afterward at Indy’s home between the archaeologist and Marcus. He tells Indy that the United States government wants him to find the headpiece and get the Ark. As Indy gets ready they talk about the Ark. The camera pans away from Indy packing to a worried Marcus sitting on a sofa and he reveals his apprehension about what his friend is going after: “For nearly 3,000 years man has been searching for the lost Ark. It’s not something to be taken lightly. No one knows its secrets. It’s like nothing you’ve ever gone after before.” Indy shrugs off Marcus’ warning but his words, accompanied by John Williams’ quietly unsettling score, suggest the potential danger Indy faces messing with forces greater and older than himself.

Kasdan also does a great job hinting at a rich backstory between Indy and his ex-love interest, Marion Ravenwood (Karen Allen). When they are reunited at a bar she runs in Nepal, she is clearly not too thrilled to see him, giving Indy a good crack on the jaw. Marion alludes to a relationship between them that went bad. She was young and in love with him and he broke her heart. To add insult to injury, her father is dead. All Indy can do is apologize as he says, “I can only say sorry so many times,” and she has that wonderful retort, “Well say it again anyway.” Harrison Ford and Karen Allen do a great job with this dialogue, suggesting a troubled past between them. In a nice touch, Spielberg ends the scene with Indy walking out the door. He takes one last look back and his face is mostly obscured in shadow in a rather ominous way as he clearly looks uncomfortable having had to dredge up a painful part of his past.

Indy and Marion have another nice scene together after they’ve retrieved the Ark from the Nazis and are aboard the Bantu Wind, a tramp steamer that will take them to safety. Marion tends to Indy’s numerous wounds and says, “You’re not the man I knew ten years ago,” and he replies with that classic line, “It’s not the years, honey, it’s the mileage.” It starts out as a playful scene as everything Marion does to help hurts Indy’s world-weary body. In frustration, she asks him to show her where it doesn’t hurt and he points to various parts of his body and in a few seconds the scene goes from playful in tone to romantic as they end up kissing. Of course, Indy falls asleep — much to Marion’s chagrin. Kasdan’s dialogue gives Spielberg’s chaste, boyhood fantasy serial adventure a slight air of sophistication in this scene as two people with a checkered past finally reconnect emotionally.

For me, Raiders of the Lost Ark still is the best film of the Indiana Jones series. The pacing is fast but not as frenetic as today’s films. There are lulls where the audience can catch its breath and exposition is conveyed. In many respects, it is one of the best homages to the pulpy serials of the 1930s and a classic example of when all the right elements came together at just the right time. This film has aged considerably well over time and each time I see it, I still get that nostalgic twinge and still get sucked in to Indy’s adventures looking for the lost Ark.

Comments:
Much as I enjoy the film, I wish I had this kind of nostalgia attached to it (everybody else seems to).

I often read that it was meant to capture a 1930s Flash-Gordon spirit or what have you. To me, it feels way too 1980s. For perfectly irrational reasons, I've always felt much more of an attachment - an attachment freakishly akin to nostalgia - towards the 30s than I do the 80s.

But yes, it certainly towers over the sequels.

I remember what a revelation it was seeing Raiders for the first time and loving it. Over the years, I've soured on it some, but I still like it a great deal. I think part of what lowered my opinion on it was when Temple of Doom opened and how much I hated it. It also didn't help that it coincided with the same time period when Spielberg turned himself into a corporation, stunting his growth as a fully formed artist.

RAIDERS, in my mind, is like the first DIE HARD or the first MATRIX: i.e. movies that birthed a hugely lucrative (and wildly uneven) series of sequels, but whose originals stand on their own as innovative, influential and virtually flawless works of pop art. I don't think one has to be nostalgic to appreciate RAIDERS (though it certainly doesn't hurt). One just has to love great movie-making.. and I use the term "movie-making" very deliberately because although great filmmaking is certainly present in RAIDERS, it is first and foremost a "movie" whose primary goal is to entertain audiences... which it does. In spades. Done at a time when everyone (Lucas, Spielberg, Ford, Kasdan, Williams, etc) was at the top of their game, it'll be no surprise to anyone here, but it's one of my all-time favorite films. I never tire of watching it.

I remember going to see "The Legend of the Lone Ranger" (with Klinton Spillsbury!) and staying after to see a sneak preview of a film I hadn't heard of, that was to formally open the next weekend. Needless to say, that late, unexpected viewing of "Raiders" quite overwhelmed the "Lone Ranger" film I'd bought a ticket for. In fact, it overwhelmed it in the first ten minutes.

I really don't get an '80s vibe from RAIDERS all that much. I think that because it was made in '80, came out in '81, it still retains residue of the 1970's style of filmmaking in a way that I can't really explain but it is just a feeling. It certainly bridged the gap between the two decades and anticipated the kind of blockbusters that would become the norm in the '80s.

I also remember when RAIDERS came out and how much I loved it. The film blew me away and I was obsessed with it. I do feel the same you do about TEMPLE OF DOOM but I felt that the franchise rebounded with THE LAST CRUSADE which was wonderfully executed. The less said about THE CRYSTAL SKULLS the better, alto, it does have its moments. For me, none of the sequels diminish the power of RAIDERS, though. It still holds up for me.

"RAIDERS, in my mind, is like the first DIE HARD or the first MATRIX: i.e. movies that birthed a hugely lucrative (and wildly uneven) series of sequels, but whose originals stand on their own as innovative, influential and virtually flawless works of pop art."

Well said! I couldn't agree more. That is definitel how I feel about this film. It only gets better with age and has stood the test of time as a stone cold classic.
12:56 PM

I remember my parents pushing me to see RAIDERS before I knew anything about it and resisted because I thought it was a religious picture about Noah's ark! Weird. Thankfully, I went and saw it anyway.