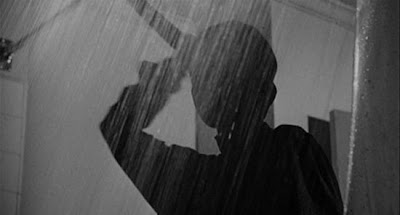 By Ali Arikan
When Alfred Hitchcock was asked what appealed to him about Robert Bloch’s 1959 novel Psycho that he wanted to turn it into a movie, he reportedly said: “The suddenness of the murder in the shower, coming, as it were, out of the blue.” He was obviously fascinated with the idea of death being just round the corner, the flimsiness of mortality in the grand scheme of life. The elemental effect of the shower scene, 50 years to the day since it was first shown to American audiences, is still profound.

Having stolen $40,000 from her boss to run away with her alimony slave boyfriend Sam Loomis (John Gavin), office worker Marion Crane (Janet Leigh) has taken refuge at a roadside motel run by the kindly, if slightly introverted, Norman Bates (Anthony Perkins). During an unnerving dinner with her host under the dead gaze of his stuffed birds (a peculiar hobby of the young man that cheekily foreshadows Crane’s fate), Marion seems to come to her senses, and possibly decides to return the money. She retires to her room, thinks the matter through (though it’s eventually unclear whether she’s chosen redemption or damnation) and eventually steps into the shower: a baptism, then, of her new self, or as Robin Wood observed, to wash away her guilt. But her best laid plans go awry, as she is repeatedly stabbed to death by an imposing silhouette.

It remains a scene of extraordinary power for a plethora of reasons. First of all, Hitchcock offs his female lead less than a third of the way through, leaving only one person with whom the audience can identify: not just a cold-blooded murderer, but an insane one at that. This coerced transfer of the audience’s sympathies shows just how radical the director’s ultimate intention was: manipulation of the viewer is far more crucial than character empathy, and, in the words of film scholar Neil Sinyard, “represents a major shift from the complacent conventions of plot-oriented popular (and populist) cinema.” It is quite possibly the paramount narrative twist in the history of cinema. 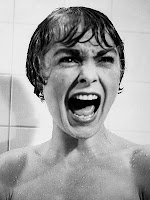 On a technical level, Marion’s murder in the shower shows Hitchcock’s true mastery of the cinematic language. Running just less than three minutes, the scene, nonetheless, took Hitchcock one week to set up. He used two cameras, a handheld, and a regular one, which, for certain shots, was affixed a long lens, in order to capture the immediacy of the water without causing any damage to the camera. The scene contains 81 different camera angles, and 50 cuts, with the murderer and the victim shown only in tight close-ups (the medium shots of the bathroom that book-end the scene sit uncomfortably with the immediacy of the crime). There is no nudity, and almost no violence (apart from a telling shot where the tip of the phallic blade touches Marion’s skin just underneath her belly button). Bernard Herrmann’s score complements the violence, the shrieking violins running parallel to both the savage thrusts of the blade as well as Marion’s screams, implying an impression of bloodcurdling brutality. As Marion collapses, her lifeless eyes the same as the stuffed birds' from the earlier scene, her blood spirals with the flow of the water from the shower: Marion’s life has gone down the drain.

The power of the scene also emanates from the murder’s mundane setting. Hitchcock taps into the audiences’ inherent insecurities about the shower, in which we are not just restricted, but also completely defenseless. So, naked, not just literally, but also figuratively. For the women in the audience, the murder is the breakdown of all personal barriers, and represents total vulnerability and the consummation of their basest fears. And for the men, who’ve been ogling Leigh since her first appearance, half naked and lustful, on a seedy motel bed, it is a perverse wish-fulfilment fantasy. Only, instead of rewarding them with vicarious fornication (also a rape, of sorts), Hitchcock makes the men complacent in the crime. “If you were happy peeping at Marion when Norman did, then you’ll have to be there for the money shot, too,” he implies. Tantalising sexuality, it seems, is only slightly removed from extreme violence.

Also arresting is the murder of Milton Arbogast (Martin Balsam), the private detective investigating Marion’s disappearance, who snoops around the Bates family home to talk to Norman’s mother while he’s away. As 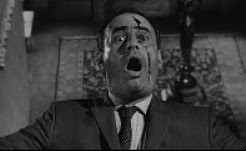 Arbogast slowly gets to the top of the stairs (as a masterful tracking shot builds the tension), the door to the mother’s bedroom slowly creaks open, and a sliver of light escapes onto the floor. Then, suddenly, to Hermann’s shrill strings, a figure rushes out at the detective with a butcher knife, the overhead view hiding the identity of the attacker. The almost-supernaturally expeditious movements of the attacker are a jolt to the audience: the previous sequence has been affectedly slow (though the finest bit of foreshadowing in Joseph Stefano’s script has earlier provided a clue, when Arbogast observes that “sick old women are usually pretty sharp”). His face slashed, Arbogast tramples down the stairs to his death, as the attacker follows to finish him off. Once again, the immediacy of death is thrust upon the viewer within the confines of a brilliantly staged, yet textually unsubtle, murder scene.

The reason why Psycho remains timeless is due to this seamless marriage between theme and technique. In the initial 40 minutes, we are asked to identify with Marion: conflicted and less than perfect, she is that greatest of all audience surrogates: the failed-hero(ine). She struggles with her conscience right until her murder (and what is the encounter with the patrolman but the literalization of her guilt). This is the end of the first chapter (Sinyard describes the film as a symphony in two movements), which builds on shock and surprise. Conversely, the second chapter, where Marion’s sister, Lila (Vera Miles), and Sam try to get to the bottom of her disappearance, is about expectation. Whereas in the former part of the film, we don’t know what’s lurking in the shadows, in the latter half, not only do we know for sure, but are also helpless. Just as Lila can never help her sister, right until that final fateful revelation, we, too, are transfixed in our futility. 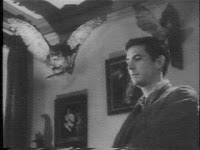 Hitchcock also makes use of simple motifs to underscore the thematic elements in his film. Take, for example, the dinner scene, where Norman is flanked by the birds on the wall. Is he their master, or the ultimate bird of prey in this picture? Shadows form talons around the characters; confined spaces, like the phone booth from which Arbogast calls Lila, make for rudimentary cages. Norman likens human beings to birds at one point, and their social trappings to cages: “Cold and damp, like a grave… They can never get out. They scratch and claw, but only at the air, only at each other…they cluck their thick tongues and shake their heads oh so delicately,” and eventually describing his mother as “harmless as one of those stuffed birds.” 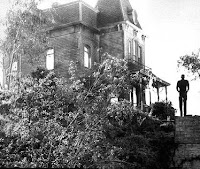 The house, too, is a psychological cage for Norman, becoming, like Manderley, a character of its own. Psycho has been described, hastily, as the first psychosexual thriller, and the Bates home represents Norman’s repression. The Slovenian philosopher Slavoj Žižek observes that the mansion has three floors: the first, where mother dwells, seems to represent the superego, which makes the ground floor Norman’s ego. The fruit cellar, then, represents the id. When Norman moves his mother down to the cellar, the bottomless pit of the id makes direct contact with the superego. The scene represents the beginning of the end of Norman’s identity, soon to be fully consumed by that of his mother. The two elemental powers of human psychology, the super-ego and the id, eventually take control of sanity, decorum and reason.

By the end of the film, we realize that the apparent manipulations of his mother have led Norman to lunacy and murder. Having fully taken over his son, the mother tries to manipulate her captors and the audience. This is the ultimate joke that Hitchcock plays in Psycho: a condemnation of the nuclear family, and, possibly, heterosexual love. “Conformism and convention will make you go nuts,” the film says, “but if you dare strive from that path, you might just find yourself at the wrong end of maniacal transvestite’s blade.”

During his famous 1968 interview with François Truffaut, Hitchcock remarked: "I feel it’s tremendously satisfying for us to be able to use the cinematic art to achieve something of a mass emotion. And with Psycho we most definitely achieved this. It wasn't a message that stirred the audiences, nor was it a great performance or their enjoyment of the novel. They were aroused by pure film." That’s why the film’s as potent today as it was 50 years ago. Regardless of the richness of its themes, or its finely textured nature, Psycho essentially works as sick spectacle. And there’s nothing wrong with that.

Comments:
I don't know if I've succeeded yet, but I've urged all my friends when they became parents to try to hide all knowledge of Psycho from their kids until they see it so that the shower scene was a shock. I saw Perkins host SNL and mocking Norman before I saw the film, so I knew it was coming. While I do adore Psycho, it's not at the top of my Hitchcocks, mainly for one reason: that god-awful Simon Oakland explanatory speech at the end. I always find human monsters more interesting when they don't try to explain them, just as it was stupid when Thomas Harris tried to come up with what made Hannibal Lecter the way he was in his later books. It diminishes an otherwise fascinating character.

While I do adore Psycho, it's not at the top of my Hitchcocks, mainly for one reason: that god-awful Simon Oakland explanatory speech at the end.

I think Edward pretty much hits the nail on the head with this. Excellent review, Ali.

Yeah, the final paint-by-numbers explanation of Norman's psychosis is clumsy (to say the least), and the film suffers from a dull twenty minutes after Arbogast's murder. Still, it's incredible how well it's aged.

Great work, Ali. Really enjoyed it. And yes, that final explanation is truly bizarre - I almost like the movie more because of that giant imperfection, and I'm not sure why.

Here's something Janet Leigh said in an interview about her role, and I really like it because it shows how specifically she was thinking of her part:

"I saw that she was really a shabby, mousy little woman. She wasn't in any way glamorous or anything. So we chose clothes that she could have afforded. We didn't have a dressmaker do them; we just went out and bought clothes that she could have bought on her salary. And I didn't have the hairdresser do my hair, I did it myself as she would: she couldn't afford a beauty parlour. I knew the background of this girl: it was lonely, poor, she was the older sister who took care of the younger one. And her drab life, in that office with that terrible man trying to take her out."

There's a documentary entitled "1/3of the Holocaust" shows a younger Hitchcock directing the notorious film segment of the "skin lampshade," the shrunken heads and other creepy nick-nacks on display.

Despite the fact the entire collection was exposed to be a fraud a short while later, those who saw the film, and even those who didn't but are told what it contained, become terribly upset.

It was a Hitchcock film. The items on display were PROPS intentionally chosen for the emotional impact they'd produce. And still some people believe it was real!

Just goes to show ya! Ol' Hitch has always had a talent for manipulating the masses.