The limits of friendship 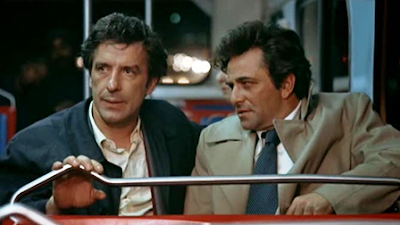 By Edward Copeland
Sporadically, I go through phases where I watch the films of John Cassavetes. I did a lot of this during my hiatus, watching Husbands, A Woman Under the Influence and Opening Night for the first time, though I wrote no reviews when I came back since the memories were too hazy. A long time ago I had seen Shadows and Faces and I have others of his films sitting in my queue. This week, Mikey and Nicky arrived in the mail. Starring Cassavetes and Peter Falk, I was under the mistaken impression that it was another of Cassavetes' films. Imagine my surprise to learn it was written and directed by Elaine May, because it sure as hell didn't sound like something the Elaine May I knew about would make.

Elaine May first came to fame as one-half of the comedy team Nichols and May, whose other half, Mike Nichols, went on to a distinguished directing career of his own. (Mike Nichols — I wonder if that inspired her main characters' names here?) May has only directed three other films, all essentially comedies: A New Leaf, The Heartbreak Kid and Ishtar. Most of her screenplay work (the ones she was officially credited for anyway) all fell in the comic realm such as Warren Beatty's Heaven Can Wait, The Birdcage and Primary Colors. Her rare acting turns fell on the funny side as well. Her hilarious role as May was the best thing in Woody Allen's Small-Time Crooks.

I go over all this resume material only to emphasize the point of what a stark departure Mikey and Nicky is in May's career. Cassavetes plays Nicky, a small-time hood with an erratic nature certain that he's been marked for elimination by higher-ups in his criminal universe. Scared, desperate and out of his mind, he phones his best friend Mikey (Falk) for help in getting him out of this scrape. The problem is, which Nicky may or may not be aware of, Mikey might be in on the assignment to take Nicky out.

The film plays mostly in the realm of ambiguity, making it easy to mistake with the sort of films Cassavetes would make as a filmmaker. It's never clear what Nicky might have done to warrant his death sentence nor where Mickey's sympathies lie. While the film basically serves as an acting duet between Cassavetes and Falk, there also are nice turns by Ned Beatty as the hit man called in to complete the job, the legendary acting teacher Sanford Meisner as the top gangster, Carol Grace and Joyce Van Patten. There also are small roles by William Hickey and M. Emmet Walsh.

Still, this movie belongs to Falk and Cassavetes, especially Cassavetes, who plays his character as if he has ADD. He never seems to sit still. Every time Falk tries to get him to calm down and stay in one place for a few minutes, he's up and doing something else, be it trying to score with a woman or causing racial problems for no good reason.

Falk also is great as always. You can tell that part of him really loves Nicky and is looking for a way to spare his friend's life, but he's also smart enough to maintain his own sense of self preservation.

May's direction keeps the unusual approach to the story moving swiftly and while her writing lacks most of her typical laugh lines, it does comes off well in the hands of her fine cast. It's far from a masterpiece, but it's a diverting title from 1976.

Comments:
Really interesting review of a film that's eluded me ever since I first got into Cassavetes, both the man and actor. I have to admit, this sounds like something that could appeal to me, Falk and Cassavetes sizzle when on-screen together. Thanks for reminding me that I need to catch up with this one!