How many make up a literary marriage? 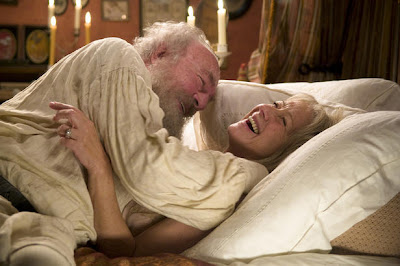 By Edward Copeland
More often than not, biopics of writers or artists turn out to be unbearable bores, mainly because trying to cinematically convey the creative process proves very hard. Thankfully, this doesn't hinder The Last Station which covers the final days in the life of Leo Tolstoy (marvelously played by Oscar nominee Christopher Plummer) because the film isn't concerned with his writing but rather the battle between his wife of 48 years (Oscar nominee Helen Mirren) and a disciple (Paul Giamatti) over whether the inheritance of his works and his late-in-life views should be given over to the Russian people and the world or to his heirs as his wife believes they are due.

As the author of War and Peace and Anna Karenina grew into old age, he began to develop ideas that took on an almost cult-like following: no private property; looking down on sexual relationships; and passive resistance. They focused on the teachings of Jesus Christ, but more as a human and less as the son of God and were thought by many to be a form of Christian anarchists. The followers of this philosophy even adopted the name of Tolstoyans, the most prominent one being his longtime friend and promoter Vladimir Chertkov (Giamatti) who regularly installs secretaries in Tolstoy's estate to keep watch over the activities of Countess Sofya (Mirren), whom he views as a threat to the movement's future because of her desire to protect her family's legacy and she sees her husband's late-in-life philosophical turn as a lot of bunk.

When both Mirren and Plummer received deserved Oscar nominations, she as lead, he as supporting, many complained that he was as much a lead as she was, but now that I've seen the film, the truth is the both really are supporting to the true main character of The Last Station, Valentin (James McAvoy), the latest secretary whose eyes all activities are seen through. I haven't been impressed much with McAvoy in his career so far in films such as The Last King of Scotland or Atonement, but this is the first time I thought he actually turned in a good performance.

Though Valentin begins his job as Chertkov's latest plant, instructed to keep a diary of every move Countess Sofya makes and every word she utters in order to the protect the Tolstoyans, it doesn't take long for the virginal would-be writer to develop sympathy for the entire Tolstoy family (even to the point that Sofya gives him a diary to perform the same task for her). What really turns Valentin around are his dealings with the renowned writer himself and his crush and eventual surrender of his celibacy vow to Tolstoy's daughter Masha (Kerry Condon).

Written and directed by Michael Hoffman from the novel by Jay Parini, The Last Station is a little gem of fine acting and interesting ideas. The entire cast plays at the top of their game. So often, material of this sort can be so obsessed with the details of the period that any drama gets lost, but The Last Station doesn't make this mistake, presenting flesh-and-blood characters instead of museum pieces and lively interplay instead of stolid exposition. When he's nervous, he sneezes and there's a great scene of shock when he meets Tolstoy and the master writer asks how the young man's own writing is going.

Plummer turns in an absolutely joyous performance as Tolstoy, funny, stubborn and indignant. Even though his new philosophy has cast a suspicious eye on sexual relations, he finds it surprising that his new secretary Valentin is truly such a celibate and recounts past sexual escapades, admitting that Tolstoy himself is far from the best Tolstoyan.

Mirren's great as always as the high-strung Sofya. It's easy to see how some could perceive her actions as meddling, but her exasperation at outsiders who meddle with her family and the love of her life make it clear who is in the right and she's brilliant.

Giamatti also adds to the film, though at times, even though Chertkov is merely a true believer, he does come off too much as a devilish villain, especially when he lies to prevent Sofya from seeing her husband as his health is on the decline.

The Last Station ended up being a pleasant surprise for me. I expected to find fine performances when I started watching, but the fact that the film was a compelling and held my interest as much as it did was an unexpected reward.