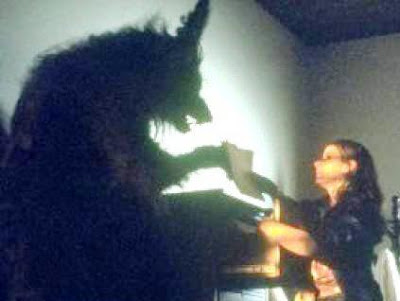 By Phil
What can you say about a movie in which the villain digs into his own forehead to retrieve a bullet, but not before quipping to a woman unlucky enough to be witness, “I want to give you a piece of my mind”? Don’t answer that. It’s a rhetorical question. Suffice it to say that The Howling, released 30 years ago today, understood the irresistibility of dishing up horror with a dash of humor. A werewolf picture jam-packed with B-movie references and a giddy love of the genre, it quickly earned a cult following that has remained loyal since the film first hit screens in 1981.

It had to share the love from fanboys. While The Howling helped steer the career of director Joe Dante into (regrettably) safer, more mainstream fare, the movie was initially overshadowed by another man-becomes-wolf horror-comedy from 1981, John Landis’ An American Werewolf in London. Comparisons between the two flicks were inevitable. Released within four months of each other, both embraced the spirit of drive-in exploitation while boasting more polished filmmaking, and both featured onscreen werewolf transformations that would have made Lon Chaney Jr.’s head spin with envy. 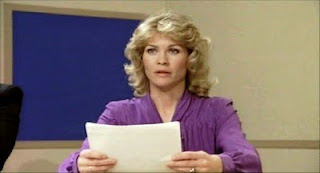 Still, I prefer The Howling for its generous humor, genuine creepiness and willingness to sleaze it up. It’s a nicely calibrated blend of smart camp and lowbrow shocks, anchored by Dee Wallace’s surprisingly effective performance as a woman trapped between lycanthropy and self-help jibber-jabber. A year before she would be Elliott’s mom in E.T.: the Extra-Terrestrial, Wallace plays Karen White, a TV news reporter in Los Angeles with the misfortune of having drawn the affection of a serial killer. As the film opens, Karen has agreed to meet with the psychopath, Eddie Quist (Robert Picardo), in a peepshow stall at a seedy porn store. Eddie appears behind Karen in silhouette, hissing about what he’s going to do to her. Karen stares ahead, in mute horror, at a grainy bondage reel being projected.

Then Eddie commands Karen to face him. She turns and sees…Well, we don’t know what she sees exactly. Karen lets out a scream, the first of many in The Howling. Two police officers who have been trailing Karen open fire, killing Eddie Quist.

The incident naturally rattles our heroine. When she returns to work, Karen freezes up under the unmerciful gaze of the camera. At home, she rejects the loving arms of husband Bill Neill (Christopher Stone). Knowing she needs help, Karen is intrigued when a courtly therapist, Dr. George Waggner (Patrick Macnee), suggests she join his self-help group in Big Sur called The Colony.

The ensuing detour into quasi-psychobabble gives Dante and screenwriter John Sayles, at the time just coming off Alligator and Piranha (also helmed by Dante), a ripe avenue for satire. Karen and Bill are bemused by the goings-on of The Colony, whose inhabitants soak in Dr. Waggner’s cautionary line that “repression is the father of neurosis.” The good doctor might be on to something, but his EST-styled knockoff includes some curious aspects. The Colony appears to host more barbecue cookouts than your average pop-psych cult. 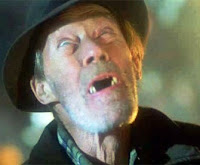 There are other red flags, too, including John Carradine as a crazy old coot and Elisabeth Brooks as a resident nymphomaniac outfitted in what looks to be an early prototype for Xena: Warrior Princess. There is more to The Colony than meets the eye. Chris and Terry (Dennis Dugan and Belinda Balaski), an intrepid pair of reporters who work with Karen, discover mysterious links between Dr. Waggner’s sanctuary and Eddie Quist. And speaking of the slain killer, his corpse has suddenly disappeared from the morgue.

It all makes for an irrepressible horror flick that delivers its jolts with a grin. Unlike a raft of slasher flicks of the late ‘70s and early ‘80s, Dante and Sayles mined the inherent absurdity of their yarn but, honestly, there’s really no other way to approach a story of werewolves who are urged on by a pop psychiatrist to embrace their inner animal.

The Howling exposes its funny bone in the opening minutes, with a sly bit involving a news anchor whose authoritative delivery masks an aw-shucks Southern twang. Dante, an avid movie buff, peppers the proceedings with knowing winks to the genre. Several characters’ names are lifted from movie directors of werewolf flicks, such as George Waggner (1941’s The Wolf Man) and Lew Landers (1944’s Cry of the Werewolf). Dante also isn’t shy about shoehorning in wolf references in everything from cartoons to literature.

Similarly, The Howling makes room for an array of B-movie icons. Kevin McCarthy of Don Siegel’s classic Invasion of the Body Snatchers portrays Karen’s boss at the TV station, while The Thing from Another 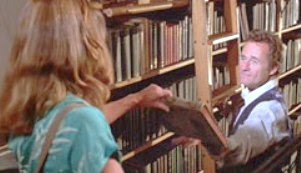 World’s Kenneth Tobey turns up briefly as a cop. Forrest J. Ackerman, the man behind Famous Monsters of Filmland magazine, makes an appearance. Dante’s mentor, the notoriously penurious Roger Corman, has a fitting cameo as a guy checking a pay phone for forgotten change. Corman even gets a second, however peripheral, nod in The Howling. His 1959 comic-horror picture, A Bucket of Blood, is referenced when its star, Dick Miller, turns up to play a slick occult bookshop owner named Walter Paisley. The name is the character Miller played in — wait for it — A Bucket of Blood. Miller’s performance in The Howling launched what would become tradition for Dante, who went on to cast the actor in a slew of his movies. 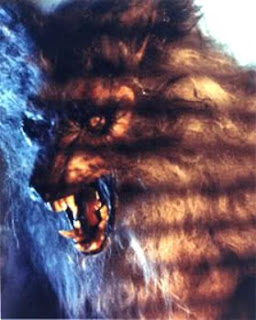 Despite the cornucopia of inside jokes, The Howling is, above all, a monster picture and it offers a humdinger of one thanks to the inventiveness of special-effects maestro Rob Bottin. By inflating various-size bladders pasted on to the face and body of actor Picardo, Bottin fashioned an impressive, before-your-eyes transmogrification from man to beast. In today’s world of CG wizardry, where even the lamest schlockfest can be visually interesting, it is tempting to forget just how eye-popping Bottin’s feat really was. Moreover, The Howling’s fully realized werewolves are a far cry from the mega-hirsute guys who roamed the Hollywood countryside of yesteryear. Bottin’s creations, shot at oblique angles and occasionally backlit in cartoon-friendly colors, look as if they just padded in from Little Red Riding Hood’s neck of the woods. These are giant wolves, not wolf men. 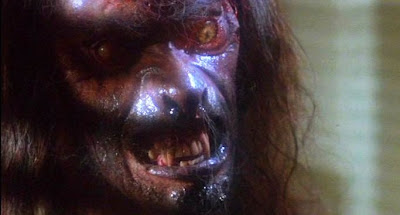 The non-monster moments also are memorable. Dante assembled a strong cast; it’s a kick to see veteran character actors such as Carradine and Slim Pickens (as a yokel sheriff, of course) chewing on the scenery, especially when the aforementioned chewing involves fake fangs.

At the center of it all is Dee Wallace. With her feathery blonde hair and all-American good looks, she is an appealing damsel in distress. But she does one better, imbuing her character with melancholic vulnerability and investing The Howling with a welcome depth of emotion. It makes the film’s ending, in which Karen transforms into a werewolf for the local TV news, as heartbreaking as it is howlingly hilarious. 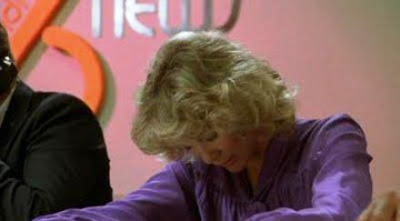 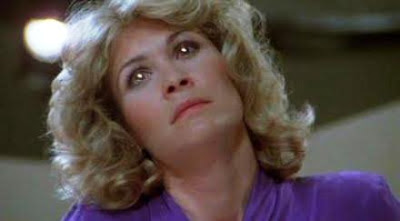 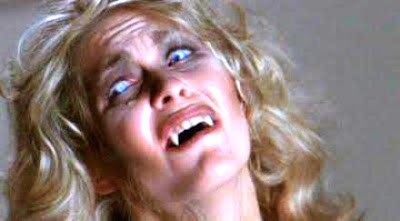 Comments:
Excellent examination of what makes THE HOWLING so damn good. While I'm in the AN AMERICAN WEREWOLF IN LONDON camp, I still love this one. Thanks, Phil and Ed.