Mean Streets ... and Rough Around The Edges 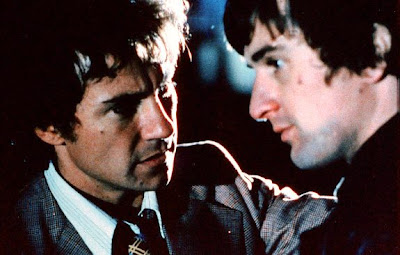 Mook: a foolish, insignificant, or contemptible person: Merriam-Webster;
archetypal young males who act like moronic boneheads...self-centered simpletons: Urban Dictionary
By Squish
Mean Streets was Martin Scorsese's fourth feature, after his first teaming with Harvey Keitel, 1967's Who's That Knocking at My Door?, the documentary Street Scenes and a Depression-era tale named Boxcar Bertha. Looking through Scorsese's filmography is like climbing a steady slope of films that become ever more popular than the last as one follows his career. Mean Streets has a young and completely arrogant Robert De Niro character as well as his second time working with a young and ironically wiser than usual Keitel. But youth doesn't mean grace, and, if you'll allow me to continue with the climbing analogy, watching Mean Streets feels more like a warmup than a workout.

My lukewarm reception of this film stems from that same youth I spoke of earlier. The cinematography shows signs of inexperience and the scenes are often rote. The most disappointing of all is that the end played out exactly as I had expected it would half way through the story. We open with a quote, a wise one, "You don't make up for your sins in church. You do it in the streets. You do it at home. The rest is bullshit and you know it."

Charlie (Keitel) has a thing about reminding himself of the pain of Hell by putting his hands over flames, and though his reasons are well known to us, this theme of Hell and sin doesn't ever become relevant or poetic, remaining merely a reminder to the audience of Charlie's internal code of failed morality.

Of course, as is true of any cinephile, there's plenty to like. Being a fan of grand entrances, I was glad to see Johnny Boy introduced with a flourish — his first scene had him blowing up a mailbox in a New York City street in broad daylight. Also it's Robert Goddamned De Niro, and no matter how bad a movie is, if he's in it, well, Hell it's OK... mostly. Every word he speaks is idiotic, stupid, brash, smart-mouthed and... mookey.

And hey, there's even a young David Carradine (who'd worked with Scorsese in his previous feature Boxcar Bertha) playing a bit part as a raging drunk.

That being said, Scorsese is one of those directors that everyone eventually learns is extremely important, and potentially worthy of a completist study. Those embarking on a quest to watch his films in chronological order will get a certain grin on their lips when they watch Mean Streets, the same way I did watching early Kurosawa and seeing Mifune for the first time, the same way I did when I watched my first real definable Hitchcock. Those movies weren't great, but they were signs of an auteur developing his craft, and even if it's not that great, it's still effin' Scorsese.