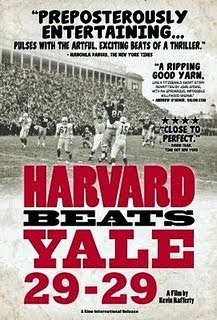 By Ivan G. Shreve, Jr.
The subject of the most engaging documentaries I’ve watched recently…is a football game. Organized (and for that matter, unorganized) sports isn’t really a passion of mine — football, basketball, hockey, etc., I don’t have much use for that kind of gamesmanship; though I do make an exception in the case of baseball (there’s just something about “America’s national pastime” that stirs my sports-cynical heart). So I was genuinely surprised when I found my spirits lifted by director Kevin Rafferty’s Harvard Beats Yale 29-29 (2008), which chronicles one of the most phenomenal gridiron contests in Ivy League history. But even as many of the former players who participated acknowledge in the end that “it’s just a football game” you’ve no doubt probably guessed by now…the film is a little bit more than that.

For many, Nov. 23, 1968 was just another “Football Saturday” but for longtime Ivy League rivals Harvard and Yale, “The Game” that afternoon at Harvard Stadium was shaping up to be a real contest. Both schools were undefeated at the time of the final game of the season, the first time such an event had occurred since 1909. As to who would dominate the proceedings…the smart money was on the Bulldogs; ranked 16th and featuring the double-threat combination of senior quarterback Brian Dowling (a superb athlete who had never played in a losing football game since seventh grade) and halfback Calvin Hill, the No. 1 draft pick of the Dallas Cowboys. The scrappy Harvard team was being beat like a rented mule by their Yale competitors, trailing 22-0 near the end of the second quarter until Harvard coach John Yovicsin decided that quarterback George Lalich wasn’t getting the job done and replaced him with backup QB Frank Champi. Things improved only slightly for Team Crimson as they ended the half with a score of 22-6.

By the start of the third quarter, it looked as if it was all over but the crying for Harvard as the Bulldogs continued to dominate, leading 29-13 with only two minutes left in the game. What happened after that — described by one Yale player as “a slow-motion nightmare” — was a comedy of errors that allowed the Crimson to end up tying a game they had been expected to lose and provided both the Yale players and their supporters a textbook example of hubris, demonstrating that if a Supreme Being does exist s/he has one hell of a sense of humor. 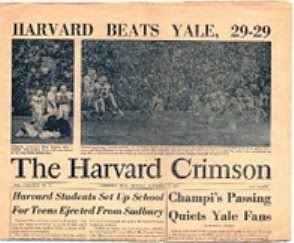 The outcome of what many have called “the most famous game in Ivy League history” is never in doubt — the title of the documentary (inspired by a headline in the Harvard Crimson) is a giveaway for anyone not familiar with the events recorded in the film. But the genius of Rafferty’s documentary is that Harvard Beats Yale 29-29 makes the game’s foregone conclusion surprisingly nail-bitingly suspenseful and unabashedly entertaining; intercutting video of the 1968 match-up (with play-by-play by sportscasting veteran Don Gillis) with interviews from nearly fifty of the surviving players on both teams. Spending an hour and forty-five minutes listening to athletes ruminate about a long-forgotten football game wouldn’t be my ideal way of spending an evening, but the individuals interviewed in the movie are funny, engaging and charmingly philosophical about a contest that for many defined their collegiate experience and shaped their various worldviews of life beyond graduation.

The most famous face among the football players in Harvard Beats Yale undoubtedly belongs to Oscar-winning actor Tommy Lee Jones, a Crimson guard who demonstrates that adorable unflappability on camera (“I 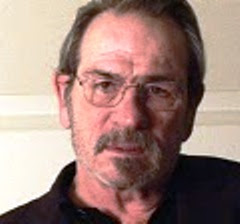 remember telling myself to stay cool and be smooth”) with wry observations about the game…and about his equally famous college roommate, former Vice President Al Gore — who Jones recalls learned to play “Dixie” on their touch-tone phone (which were just replacing rotary-dial phones at that time) and once helped him prepare a Thanksgiving turkey in a fireplace. Gore’s GOP nemesis in 2000, President George W. Bush, was also around at that time (though he matriculated on the Yale campus as a roommate of Bulldog tackle Ted Livingston; another player admits that the team played a small role in Bush’s being arrested for tearing down goalposts at a November 1967 game) and so was a Vassar student who, like Jones, also later eked out a successful career in films (winning two Academy Awards for her thespic emoting): Meryl Streep. (A teammate of Yale fullback Bob Levin, who was dating Streep, remarks that he’s really been surprised by Meryl’s cinematic accomplishments because in those days she’s was a bit on the quiet side, “saying virtually nothing.”) Yale quarterback Brian Dowling has also registered in the pop culture consciousness, though not in the way he probably expected. During his heyday at the college, the Bulldog’s captain (who was nicknamed “God” by his fellow players and classmates; a Yale Daily News headline even once read “God Plays Quarterback for Yale”) and his team were frequently parodied in a comic strip that ran in the campus paper entitled Bull Tales, drawn by an underclassman named Garry Trudeau. Trudeau added the character of “B.D.” to his dramatis personae of Doonesbury, his Pulitzer Prize-winning creation.

The main character of Mike “the Man” Doonesbury is speculated by one player to have been based on Yale’s defensive captain, linebacker Mike Bouscaren, who is nothing like his illustrated counterpart is that he’s not quite as likable at certain times. He’s also a good example of how athletes have a tendency to embellish their 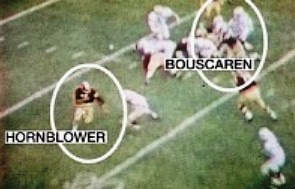 gridiron exploits in a revealing segment when he boasts of “taking out” Harvard halfback Ray Hornblower, dealing Hornblower an injury to his ankle that sidelined him for the rest of the game. (According to Bouscaren, he held a grudge against Ray when the Harvard player left Mike’s jockstrap on the ten-yard-line in a junior year game.) As the risk of using the old cliché “let’s go to the videotape,” an analysis of the video playback shows that Bouscaren wasn’t anywhere near Hornblower when the injury occurred. Nostalgia often has a way of clouding important events: John Waldman, a Yale player who got in the game for one play but whose pass interference penalty was just one of the many chinks in the Bulldog armor during the contest’s final crucial minutes, says he’s watched the video “4,000 times” and is pretty sure he “never touched” Harvard’s Pete Varney. (I watched it only once and it’s obvious the ref made the right call. Facts are stubborn things.) 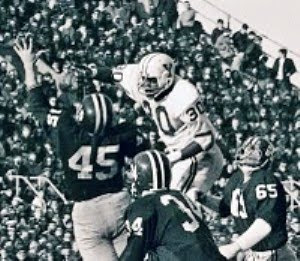 1968 was a year of tremendous social and political upheaval, and as such it’s interesting to hear many of the interviewees cogitate on how those events influenced their actions and thinking at the time. The insular and isolated Yale campus (where the Young Americans for Freedom maintained a larger presence than Students for a Democratic Society) was nevertheless unable to divert its attention from hot-button topics like the Vietnam War and the sexual resolution (viewers need to be reminded that, as Bulldog safety J.P. Goldsmith cracks, “women hadn’t been invented yet”—the Yale campus was still an all-male preserve at the time) and Harvard, long considered a “hotbed of liberalism,” sometimes experienced conflict between anti- and pro-Vietnam war players (such as defensive back Pat Conway, who animatedly recalls how he’d defiantly walk through picket lines situated outside the Yard’s buildings, monitored by politically-motivated students). But at a time when, as Goldsmith puts it, “everybody had a mad on,” hippies and brown shoes put aside their differences every Saturday in New Haven for football…and in Cambridge, any potential political knockdown/drag-outs took a back seat as those opposed and supportive of the U.S. overseas suited up for the sake of The Game.

resonates with viewers because it’s a timeless tale of the triumph of the underdog. You can’t help but identify with the Harvard players who were astonished at how they were able to stave off an almost certain defeat even when they were “getting their butts kicked” and suffering jeers from the Yale supporters in the stadium (taunting the team with cries of “We’re Number 1” and “You’re Number 2”). But the beauty of Harvard Beats Yale is that the opposing team didn’t lose perspective as a result of their “defeat” and that concept remains the underlining impression throughout the film. “I’m glad that we lost,” Bouscaren muses as the film nudges toward its conclusion. “Because if we had won I’d probably have more difficulty becoming just a regular person…becoming a person who understands that all in life is not fair — that you can’t win all the time, and it’s good to be humble.”

“If it wasn’t for that game they wouldn’t be remembered today,” adds Harvard’s Frank Champi, referring to his gridiron competitors and their win-some, lose-some outlook on the final results. “It’s a win-win for everybody.” Precisely the sentiment I would beg, borrow and steal to describe my experience watching this exceptional film.

Comments:
I have no allegiance to Harvard or Yale but I have to say that shouldn't have been pass interference on John Waldman. Your eyes do deceive you on that - it was great defense.
-Fred the D-Backs Coach from Texas

Most wholeheartedly, I agree with Fred from Texas. (Although it's hard to do that since I'm a Mizzou grad and HATE Texas.) I just saw the movie on ESPN Classic, and used my DVR to re-run that play several times. He reached around the end and tipped the ball out of his hand. If there was ANY contact at all, it was incidental, meaningless, undetectable. The DB was out-sized by several inches and a hundred pounds.

Nonetheless, when it's ordained that the game will play out as God (or the gods) designed it, the refs simply had to blow the whistle.

I disagree with the two other posters. I clearly see Waldman starting to pull Varney down with his right arm just as the ball gets there. He DOES knock the ball down, but it's not legal do that while you're interfering with the opposing player.
-Winston, Penn alum

I disagree with the two other posters. I clearly see Waldman starting to pull Varney down with his right arm just as the ball gets there. He DOES knock the ball down, but it's not legal do that while you're interfering with the opposing player.
-Winston, Penn alum