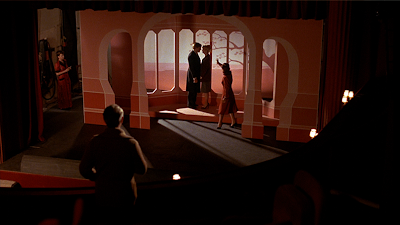 By Jonathan Pacheco
François Truffaut's personal feelings and memories drove his 1959 semi-autobiographical character study,The 400 Blows, but it's in The Last Metro that he finds the opportunity to share more details of his childhood, particularly during the German occupation of France in the '40s. While the film portrays a time of hiding, penny-pinching and compromise, it does so with a sort of affection. As one of Truffaut's final pictures before his death, the 30-year-old film looks at the Occupation as the director probably remembers it: it was a time of struggle, but life continued. Kids still found ways to occupy themselves. Women who couldn't afford new stockings simply drew fake seams down the backs of their legs. And plays were still performed by the theaters that could afford to do so, such as the Théâtre Montmartre, where a group of performers and stage crew band together to put on a production that may make or break their little theatre. The joys of The Last Metro come from Truffaut's fond portrayal of this theatrical family forging on despite the recent disappearance of their Jewish director, and they do it through the matriarchal leadership of Marion (Catherine Deneuve), a reluctant ringleader in her husband's absence.

She's thrust into the role when he, Lucas (Heinz Bennent), flees the Nazis — hiding not in the Americas, as rumors suggest, but instead in the theatre's cellar where the auteur attempts to direct his play from a distance, his nightly visiting wife the conduit for his creative notes and discernment. For this particular production, the Théâtre Montmartre snagged Bernard Granger (Gérard Depardieu), a local budding star of the stage as well as a bit of a womanizer and (secretly) a member of the French Resistance. He's passionate about all three interests, but his political and moral ideals take precedent. However, the greatest danger in Truffaut's surprisingly non-threatening film isn't the Nazis, but rather Daxiat (Jean-Louis Richard), a critic and journalist with power, influence, and an anti-Semitic agenda.

From the film's first moments of archival footage running under a narrator's rapid stage-setting, it's clear that Truffaut wants you to know that you're being told this story. As Roger Ebert pointed out, "The use of a narrator became one of Truffaut's favorite techniques; it's a way of signaling to us that the story is over and its ending known before it even begins." Once Truffaut's own footage begins — a scene in the streets of France — the film declares itself a "studio picture," and contrasting it with The 400 Blows is a bit shocking. Instead of the naturalistic mindset of the New Wave, The Last Metro aims for the "soundstage feel" — and it works in an appropriately theatrical way. With the acting, sets, and confining camera angles, it sometimes feels as if we're watching a stage production.

Most of that disappears once the story inside the Théâtre Montmartre gets rolling; the characters are just too engrossing. Truffaut does, however, sparingly call attention to the storytelling nature of the film, but he does it so sparingly and so brazenly that it knocks you out of the story each time. That may have been Truffaut's intention, but it mars the experience of watching The Last Metro, with most offenses coming from the film's loud noir musical pieces that blast in anytime Bernard meets up with a fellow resistant, Christian (Jean-Pierre Klein). In a film with nearly no score (and perhaps in no need of one), the abrupt cues are almost cartoonish.

Those deviations can be taken in stride, but it's a little more difficult to accept the narrator's re-emergence after hibernating through most of the film. A jarring and curiously goofy sequence near the film's conclusion has the narrator giving us a quick, "Where are they now?" sort of wrap-up before quite literally introducing the film's epilogue. Naturally, if a narrator opens a film, you can expect him to close it, and the distancing narrator was very much part of Truffaut's style, but used so scarcely, it seems to do more harm than good in a film typically so wise in how it involves you with its story and characters.

Each member of the Théâtre Montmartre has distinct stories, secrets, and issues, and Truffaut gives us a glimpse into each one to create characters worth remembering. Most pleasing is how he gives us just enough information. You don't come away wishing he'd delved more into any specific character — not because they aren't interesting, but because there's more pleasure in the small facts and implied details, like when the film touches upon the homosexuality of the play's stand-in director, Jean-Loup (Jean Poiret), or how it gives us that great moment when the theatre technician, Raymond (Maurice Risch), admits that he never corrected the false assumption that he was sleeping with his black market connection because, well, she's pretty and he's not.

When Marion walks in on Arlette (Andréa Ferréol) kissing Nadine (Sabine Haudepin) in a dressing room, we do get a scene or two centering on Arlette's sexuality and discomfort with her preferences coming to light (also explaining why she constantly spurred Bernard's advances), yet nothing is really mentioned about Nadine's sexuality. But we didn't need to get into that. We know Nadine as an unapologetic (and ambitious) young actress, and we can accept that she might be bisexual, or, perhaps more likely, experimental. Giving too much of an explanation would undermine the way Truffaut goes about providing these delicious rations of insight.

The Last Metro pleased critics and crowds upon its release, but it's obviously not as important, challenging, or masterfully put together as Truffaut's greater successes. For years, the director longed to portray his memories of the World War II era on film, and his nostalgia definitely shines through, but the film's true merits stem from his affection for the men and women of the Théâtre Montmartre.