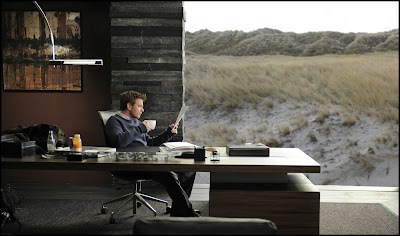 By Jonathan Pacheco
You knew a guy back in high school, a pleasant, smart, occasionally clever guy. Not a brainiac, not a clown, not a jerk, not a socialite, just a solid guy. He possessed few faults (as far as you cared), and you never thought of him as "average"; he was more interesting than that. But these days, you really don't remember him unless someone else brings him up, and you say, "Oh yeah, that guy."

A solid, decent guy typically doesn't claim a lot of real estate from your memory landscape. And why is that? Well...because his intelligence didn't frighten you like the kid with the 4.5 GPA. Because you two didn't have an ongoing comic strip featuring characters like "Super Cow" and "The Snoogan." Because he never soiled a friend's pillow with his precious bodily fluids at summer camp. You meet a lot of people through the years, and as time goes by, this solid guy just doesn't jump out at you nearly as much as some of the more memorable or extreme people. Isn't that a shame?

Roman Polanski's The Ghost Writer is that solid guy, and finding something wrong with the film is proving difficult for me. Its story of an author (Ewan McGregor) penning the memoirs of a former British prime minister (Pierce Brosnan) engages and entertains, slowly spinning us and our protagonist through a political vortex. The acting ensemble shows few cracks and the muted cinematography pleasantly understates without resorting to "easy shots." It's a solid film.

And yet...there just isn't enough to set it apart. I applaud a film that resists the urge to "spice up" subtle roles, that avoids unnecessarily active camerawork, that refrains from shoehorning misfit car chases. These choices aren't unadventurous, they're intelligent. But if The Ghost Writer had hoped to claim greatness, it should've taken more risks, particularly with its script. The plausible story (in movie terms) doesn't take itself too seriously (something I love), but as it unfolds, it opts for security over potential. I wouldn't call the developments and twists clichéd, but they're only a notch or two above that, which perks-up but doesn't truly refresh a mostly familiar plot.

That's a bummer, because The Ghost Writer has got a lot of positives. It visually employs hues of blues, sandy beiges, and sterile metallics more creatively than the typical political thriller (reminding me a little of Tom Tykwer's work in The International), and it showcases charismatic performances from McGregor — loose, funny, and never in the way — as well as Olivia Williams — sexy and comfortable as the former prime minister's loyal but secretive wife. Really, I'm aching to hail The Ghost Writer as a great film; it's not. Worse, I sound like I'm bashing the film when I say that.

After finishing a draft of this review, I read Roger Ebert's thoughts on the film. We both praise it for pretty much the same things: strong acting, entertaining storytelling, filmmaking built on "craft, not gimmicks," as Roger puts it. Yet he gives The Ghost Writer his highest rating — four stars — and I'm struggling not to call Polanski's film "forgettable." The difference, as I've written in the past, is that someone such as Ebert feels that the height of filmmaking is not making mistakes, and while I respect that opinion, it seems a little soft and unchallenging for my own personal definition. A film that makes no mistakes is usually a film that plays things safely. The Ghost Writer, when it really counts, does just that.

You see, it is a strong film, just not strong enough to distance itself from the pack, dooming it to live on as "the solid guy." It's that pleasant film that you watch, enjoy, and forget about in a few weeks. Months — perhaps years — later, a friend of yours spots the DVD in the bargain bin. "Hey, you seen this one? Ghost Writer?"

Comments:
I saw the film a little less than a week ago and I've been unable to think of anything since. That's obviously not long enough a window to determine how forgettable (or un-so) it is, but I felt that The Ghost Writer was significantly more than solid. I completely understand why you had the reaction you had, given the constant clash between Polanski's playful MacGuffining and his spare cinematography and the alienating effect I can easily see it creating, but it hooked me and held me the whole time.

I loved that cinematography, its use of isolated light sources that visually played on the "ghost" aspect of ghostwriter, loved the way it clearly stated its politics without forcing them, and I loved pure flourishes like that absurdly long tracking shot at the end, which reminded me both of the tracking of the key in Hitch's Notorious as well as the classic Sideshow Bob and rakes gag from The Simpsons (albeit reversed so it went from serious to laughable back to dramatic).

Most of all, though, I loved how much faith it placed in its audience, which is strange as it's clearly meant to wave a middle finger at both America and the UK. While insulting us, Polanski treats us with more respect than Hollywood has shown us in God knows how long. I know that some will find it dull, but I took the sparse mise-en-scene and quasi-Willisian lighting as Polanski's belief that we could draw our own unease without being forced (Desplat's simultaneously unorthodox and slightly Herrmann-esque score aids this as well).

I liked it more than you did and that ending sequence, from the handing of the note until the finale, has to be one of the best movie endings of recent memory. I wish the rest of the movie lived up to the brilliance.