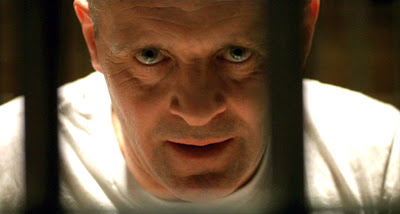 By Damian Arlyn
"Ready when you are, Sergeant Pembry."

Hannibal Lecter is just one of those characters. You know the type I'm talking about. They come around every once in a while and completely capture everyone's imagination. This particular character was created by American novelist Thomas Harris and introduced in his pot-boiler Red Dragon. Over the years he appeared in three other Harris novels and even showed up onscreen in Michael Mann's stylish thriller Manhunter (where he was portrayed by Brian Cox). However, it wasn't until 1991, when the film adaptation of The Silence of the Lambs premiered and the world was introduced to Hannibal Lecter in the form of Welsh actor Anthony Hopkins, that the character took on mythic status. It was 20 years ago today that a simple slurping noise would forever associate fava beans and a nice chianti with cannibalism.

It's hard to imagine, as it always is when an actor becomes so indelibly identified with a role, but Hopkins was well down on the list of those considered for the role of the psychotic psychiatrist. The list is like a who's who of Hollywood leading men (including Gene Hackman, Jack Nicholson, Robert De Niro, Robert Duvall, etc.), but all either passed on the part or were eventually dropped from consideration before director Jonathan Demme had the simple, but brilliant, idea of casting a great actor rather than a movie star. Hopkins, having appeared in such films as The Lion in Winter, The Elephant Man and A Bridge Too Far may not have not been completely unfamiliar face to movie audiences at the time but he certainly wasn't a well-known one. His portrayal of Lecter earned him an Academy Award for best actor and made him a household name. Unlike many less fortunate actors, Hopkins has transcended the role, even after playing it in two more films, through his sheer talent and versatility. 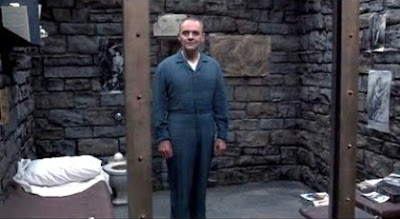 The first time we see Lecter in the movie it's from the perspective of the film's heroine Clarice Starling (played by Jodie Foster) as she walks down an underground hallway past several cells of clearly deranged and dangerous criminals. We've heard talk of how crazy and deadly Lecter is ("His pulse never got above 85, even when he ate her tongue."), we've heard the nickname associated with him ("Hannibal the Cannibal") and we expect something on the level of, or perhaps even surpassing, the craziness being displayed by these other inmates. What do we see instead when we finally glimpse this so-called monster? We find a calm, composed gentlemen standing in the middle of is cell with his arms at his side staring directly at us, as if he were waiting for us. "Good morning," he says quite nonthreateningly. This is one of the best introductions of a character in the history of film. It sends shivers down our spine precisely because it is surprising. It subverts our expectations and consequently ends up being even more unnerving.

Hopkins' decision to play Lecter as a charming, educated and polite individual, who in any other context would certainly seem eccentric but nonetheless still sane, only serves to make his psychosis all the more frightening and powerful. It serves as an interesting counterpoint to Ted Levine's "Buffalo Bill" who is clearly batshit crazy and undeniably disturbing but really only about half as interesting as a character. Hopkins understood that evil can often be very attractive and that even a villain, if done correctly, can be engaging, fascinating and compelling (an approach echoed years later by Heath Ledger when he portrayed the Joker in The Dark Knight). Thus, the audience ends up going through a series of complex emotions with regard to Lecter because they can be, in one sense, drawn to him(perhaps even "like" him) and yet, in another sense, be completely disgusted by and despise him. Sherlock Holmes once said of Professor Moriarty that he "admired his mind" (since he clearly was a genius) and yet he hated his nemesis and everything that he stood for. It is this dynamic which, I think, partly explains Lecter's appeal to audiences.

I realize I'm spending most of this article talking about Lecter as if he's the sole reason the film was so successful, but that is not at all the case. The rest of the film is superbly crafted in all areas of its production: the claustrophobic cinematography by Tak Fujimoto, the eerie music by Howard Shore, the intelligent screenplay by Ted Tally, the visceral editing by Craig McKay, the sure-handed direction by Jonathan Demme and the excellent performances given by the cast. All of these elements combine to make an enormously effective suspense-thriller/horror movie experience and, in spite of the enormous controversy surrounding its lurid subject matter, its perceived attitude toward women and homosexuals, multiple Oscars (including one for best picture) were awarded to the film as a result. So, why is it that 20 years later, the most lasting memory that the film leaves is that of a single character who is onscreen for less than a quarter of its running time. Well, as I said before (rather inarticulately), I think it's because Hannibal Lecter is just one of those characters. He's one of those creations where everything, his personality, the actor playing him and the timing of his appearance on the scene all fuse together to become something that somehow sneaks past our defenses and embeds itself in our combined consciousness. Is it his cannibalism? His brilliance? His madness? His bizarre courtesy? Is it all of them together? Who can say? All I know is that Thomas Harris created Lecter but Anthony Hopkins immortalized him and as is seen in the final haunting shot of the film, he got away and is still out there somewhere. Maybe he'll always be out there and as long as he is, we'll have to be on guard... and never, EVER become census takers. 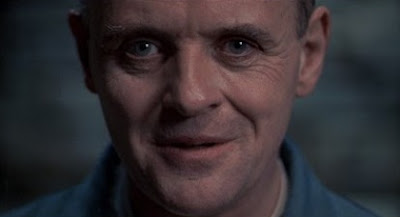 Comments:
this blog is really amazing!
i love it!
it´s very informative

Hopkins was great, but it still drives me nuts that he won lead for only appearing in 25 minutes of the film. He doesn't show up for nearly a half-hour, does his bit and then vanishes for the rest of the film until the very end. What's worse is how he diminished his own great creation in Hannibal and Red Dragon where Lecter might as well have come with a drummer to do rim shots for all of his lines. Of course, as well cast as Red Dragon was, Manhunter still kicks its ass.

You raise an interesting point, Ed. How much screen time (or percentage of he movie) does a character have to occupy to be considered a lead? I have no problem thinking of Hopkins as a lead because in my mind it's not just how much he appears in the film but how important his character is to the story, which is essential.

I've never actually seen all of MANHUNTER. I've watched bits and pieces here and there and it looks interesting (if a bit dated). RED DRAGON I really liked (better than HANNIBAL) which is kind of sad since I think it goes without saying that Ridley Scott is a superior director to Brett Ratner. I'm still confused as to how Ratner was able to make a soild product in RED DRAGON. My guess it is that it has to do with the talent of everyone else involved. When you have Ted Taly writing your screenplay (based on a novel by Thomas Harris), Dante Spinotti shooting your film, Danny Elfman scoring it and actors like Hopkins, Norton, Feinnes, Keitel, Watson and Hoffman in your cast, it'd be hard not to screw it up. all you have to do is show up on set and stay the hell out of the way. A retarded monkey probably could've directed RED DRAGON.