The Most Vulnerable Point 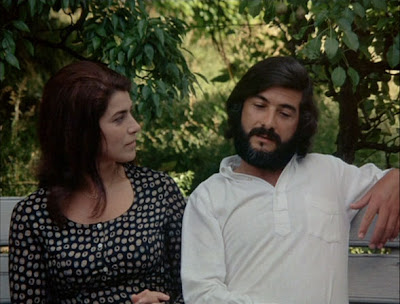 By Jonathan Pacheco
Released 40 years ago in the U.S., Claire's Knee is Éric Rohmer's invitation to consider how much one can believe a man who may not believe himself. During a summer on Lake Annecy, the film dissects the words and thoughts of a charismatic diplomat and contrasts them with his actions and their implied motivations as they pertain to two enticing underage girls. As the fifth film of Rohmer's Six Moral Tales, Claire's Knee observes the obsessions, desires, and so-called perversions of a grown man from a woman's perspective, exposing them for their typicality and self-deluding nature.

Handwritten title cards noting the day's date precede every scene as the film chronicles a month in the life of Jérôme (Jean-Claude Brialy), vacationing in France before his marriage. The handsome, confident, intelligent man soon bumps into his female equivalent, an old flame and writer, Aurora (Aurora Cornu), who's lodging with a family off the nearby coast. As the two spend more time together, one topic they consistently land upon is Jérôme's impending marriage and how it relates to his freedom; he claims he loses no freedom with his decision to wed, still able to behave as he wishes sexually, only, according to him, doing so would be pointless. He's come to the logical conclusion that he and his fiancée are meant to end up together. Still, Aurora becomes intrigued by his claims, and more so with how they relate to the way her host's 16-year-old daughter, Laura (Béatrice Romand), has become infatuated with the frequently visiting Jérôme. The author urges him to nurse and pursue the girl's flirtations, considering it "research" for a novel she'd like to write.

What we see on screen is, essentially, Aurora's writing notes detailing the events she witnesses and those relayed to her by Jérôme, explaining the film's distant feel and why scenes exist solely to inform, sometimes cutting off abruptly once we've seen all we need to see. Aurora is calculating and deliberate, and so is this resulting film. More than a slight storytelling gimmick, this more objective perspective subtly works to reveal Jérôme's delusions, specifically his conviction that his desires for Laura and her visiting stepsister, Claire (Laurence de Monaghan), are empty, pointless, and mostly out of obligation to Aurora's requests.

Though convincing for most of the time, Jérôme's repeated claims of feeling nothing for other women, constantly pointing to his impending marriage as evidence, serve as slightly idiosyncratic indications of the man's inner struggle. He insecurely qualifies many actions with the reminder that does these things only to benefit Aurora's novel, yet it's without Aurora's prodding that he becomes disturbed and infatuated by Claire, specifically by a desire to caress what he deems her most vulnerably body part, her knee. If before, Jérôme had to be nudged or urged to pursue the younger Laura (symbolized when Jérôme rattles the cherry tree to see if the fruit is ripe), his desires for Claire feel like they would have shaken loose inevitably (like the ripe cherries being picked in the scene where he first notices the blonde's wondrous knee).

Aurora sees through her friend. Like the painting of the blindfolded Don Quixote, the hero must be blinded, otherwise he'd never go through with the adventure. Aurora allows Jérôme to be blind to his true motives and insecurities so that she can selfishly benefit from his escapades. She does, however, occasionally call him out regarding the true banality of his stories. Because he never sleeps with any of the teenagers, Jérôme's tale is decidedly ordinary except for the emphasis and perversion that he himself places on it. To Aurora, that's not enough (which may be why the film feels like her notes instead of her novel). But it is for Jérôme, who, by the film's end, basks in his triumph, congratulating himself on fulfilling his fantasy while simultaneously doing Claire a favor by turning her against her bratty boyfriend Gilles (Gérard Falconetti). I'm convinced that Jérôme needs to play these games to find comfort and convince himself that his experience is special, not banal, that his marriage is liberating, not confining, and that he possesses discipline, not weakness.

What challenges me the most about Claire's Knee is how persuading Jérôme can be. Like the smooth diplomat that he is, he's compelling, confident, and convincing in almost every word he says, and for most of the film I'm in denial about his true nature. I want to believe him when he says his affectionate actions toward Laura don't feel sinful but rather meaningless and out of obligation. I want to believe that his self-assessments are honest. But by the time the screen reads "Fin" as Claire reconciles so easily with the boyfriend Jérôme thought he successfully turned her against, his previous gloating turns pitiable, and there's little left he can say about himself that I can believe.