I'll have a Gogol with a twist 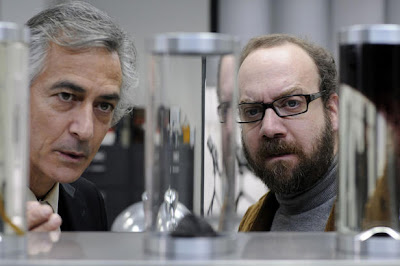 By Edward Copeland
When a movie year ends, more often than not, I tend to conclude that it was another weak one, especially since my situation takes me a long time to catch up with a sizable crop of a year's output. Still, with many films from 2009 that I've still yet to see, I have to say I'm hard pressed to come up with a recent year that has produced so many great original screenplays. Cold Souls is just the latest example of that group that I've managed to see.

While I still find it supremely silly that the Oscars expanded best picture to 10 nominees, as I do my usual rough draft of my own awards, it's the original screenplay category that is giving me fits. There have been far too many scripts beyond the usual number of five that it pains me each time I have to consider making a cut. Best picture itself hasn't been as difficult (and adapted screenplay hasn't been remotely that hard) but original screenplay 2009 is a heartbreaker for me (with director a close second).

Cold Souls is the latest film to toss that original screenplay category asunder. At first description, writer-director Sophie Barthes' film seems as if it's the newest film off what I like to call the Being John Malkovich assembly line, but it's so much deeper and better than that, thanks mainly to its phenomenal lead, Paul Giamatti playing a film version of himself. Giamatti is busily rehearsing the lead in a stage production of Chekhov's Uncle Vanya, but all that Russian angst and gloom has finally begun to take its toll on the actor as he attempts to go about the rest of his normal day.

His agent turns him on to an article in The New Yorker about a company that offers the temporary removal of one's soul, to allow for the removal of that unbearable metaphysical weight for a period of time so people can get through difficult moments of their lives. Giamatti, understandably, is skeptical at first, but the lead doctor on the process (a wonderfully droll David Strathairn) talks him into giving it a try. Then things get complicated.

To describe much more of the film's twists would ruin its joys but let's just say it involves crooked Russians who traffic in human souls, the completely bearable nature of soullessness and donor souls to serve other functions.

In addition to the able help of Strathairn, the cast also gets a lift from Emily Watson as a fictionalized version of Giamatti's wife and, most especially, Dina Korzun as Nina, a Russian woman who earns her living as a mule shepherding souls back and forth between New York and St. Petersburg.

Barthes finds both the perfect tone and pace for her movie that complements brilliantly her intelligent script. Still, in the end, this is Paul Giamatti's show from beginning to end.