You are who they pay off 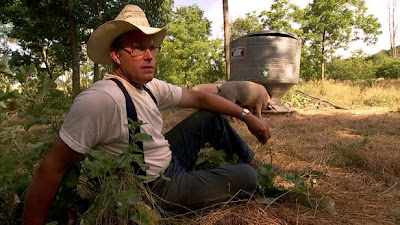 By Edward Copeland
Maybe it's the fact that Hollywood is in such doldrums that they are so afraid to take chances and think the next big thing is making movies based on toys and board games that makes well-made documentaries so often beat their offerings in quality and appeal. Even the indie market seems to have hit a rut where those filmmakers plow the same crops, even if they are fields ignored by the big guys. That's why when a documentary as informative and put together with such panache as Robert Kenner's Food, Inc. comes along, it's a cinematic breath of fresh air that puts the majority of fiction films to shame.

Food, Inc., doesn't take the stance as a political screed urging vegetarianism for all. On the contrary, Kenner's film is a remarkably well-made expose on all aspects of the American food system which, as we've learned through the greed and carelessness of the big financial institutions on Wall Street or the money grubbing of hospitals, doctors and health insurance companies, spend much of their time lining the pockets of those who supposedly represent the common man so they can maximize profits and literally control not only what we put in our mouths but what is allowed to come out of them.

Before I delve into the substance of this brilliant film, I want to point out the wonder of its opening credits. Many films have great credit sequences, but unless Saul Bass was involved, they don't usually get the credit. The opening sequence of Food, Inc., is perfection, as it not only pleases the eye but serves as an excellent conduit into the documentary itself.

Unlike the documentaries of Michael Moore, where he is a key part of the show, Food, Inc., isn't about stunts. It's reporting at its finest while still managing to be riveting and informative. Of course, none of the many corporations mentioned in the films agree to talk to the filmmakers and the businesses's deep pockets scare many into insisting on disguises or not talking at all. It's shocking to learn what strong-arm tactics have been used against the nation's farmers and to see the revolving door between the food companies and government regulatory jobs (of which there are far fewer now that there were a mere 30 or 40 years ago).

The corporations have no reluctance to crushing people's lives if they don't conform to their assembly-line, unsafe ways of raising animals for food or growing soybeans. Lawmakers are willing co-conspirators. In Colorado, it actually is a crime if someone speaks out or writes something disparaging the quality of beef raised in Colorado. The First Amendment need not apply to beef.

What's even more special about Food, Inc., is that it's not really a film that falls on one side of the political spectrum or the other, though it definitely, combined with all the other recent scandals, shows the need for strong regulations to protect Americans from all corporations. They keep the prices of the unhealthiest foods down, so that's all the poorest can afford. I almost don't want to cite specific examples from the film: It needs to be experienced. It doesn't matter whether you are as far left as they come or as far right as they come, I don't see how you can watch Food, Inc., and not be angry by the film's end. Maybe this is where common ground can be found since we all need to eat, no matter who we vote for.