Back to Wine Country 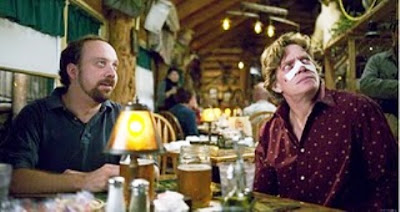 By J.D.
Alexander Payne is part of an exciting new wave of filmmakers who grew up during the 1970s and were subsequently influenced by the movies from that era. His contemporaries include the likes of Wes Anderson, Paul Thomas Anderson, and David O. Russell, to name but a few. And like his fellow filmmakers, Payne eschews the Hollywood trend of placing an emphasis on special effects and trendy actors in favor of character-driven, comedy-drama hybrids with character actors such as Laura Dern, Matthew Broderick and Kathy Bates.

Payne’s About Schmidt (2002) continued his fascination with American cinema in the ‘70s by featuring one its biggest (and most prolific) stars, Jack Nicholson. His next film, Sideways (2004), continued the road movie motif from Schmidt and combined it with the buddy film. Jack (Thomas Haden Church) is a failed actor about to be married. He decides to go on one last weekend of uninhibited fun with his best friend, Miles (Paul Giamatti), a school teacher and struggling author. They go on a wine-tasting tour through California’s Central Coast and squeeze in a bit of golfing as well.

Miles is an avid (nay-elitist) wine aficionado while Jack is completely ignorant of wine beyond what tastes good to him and what doesn’t. Miles is trying to get his book published with little success and he’s grown cynical and a bit defeated as a result. Initially, he comes off as an unlikable loser not above stealing money from his mother. Jack counters Miles’ repressed nature by coming off as something of an instinctive kind of person who indulges in his raging id. He was on a hit television show... 11 years ago and is now relegated to doing commercials. Along the way, Jack and Miles meet Maya (Virginia Madsen), a beautiful waitress who Miles knows from way back when, and Stephanie (Sandra Oh), who works at a winery and catches Jack’s eye.

Jack and Miles are complete messes as human beings. They lack direction and are hypocrites. Miles says he’s an author but his book is going nowhere, while Jack is getting married but hits on anything in a dress. They are hardly a sympathetic pair. And yet Payne is able to get a lot of comedic mileage from the pair. Miles is a wine snob who rambles on about the taste, color, and so on, only to have Jack sum up his opinion simply, “I like it,” which comically deflates Miles’ pontificating. 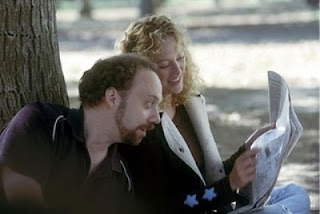 An interesting thing happens during the course of the film. At first, Miles starts off as an unsympathetic character while we warm up to Jack’s funny repartee as the charming rogue. Halfway through the film they flip roles and its Jack who is exposed as a pathetic womanizer and Miles becomes more sympathetic thanks to Maya’s influence. She humanizes him. Maya is easily Miles’ intellectual equal. She knows her wine and this clearly impresses Miles. She’s smart and beautiful so why is she even wasting her time with a sad sack like Miles? She gets to know him beyond his looks and liquefies the pretension of his character. Maya pierces his wine-speak armor that he throws up all the time with her easy-going nature and Miles realizes that he doesn’t need to constantly impress her. Like a fine wine, she allows him to breath and he gets better as time goes on. She’s a romantic who is able to cut through his cynicism and soften his hard edges.

Fresh off the success of American Splendor (2003), Paul Giamatti is one of those actors who makes it look so effortless as he inhabits the characters he plays so completely. Miles is a neurotic mess; a depressed cynic who is definitely a half glass empty kind of guy. Giamatti is able to tap into his character’s deep reservoir of pain and anger. In some ways, Miles is a variation of Giamatti’s take on the equally acerbic Harvey Pekar in Splendor. Ever since his stint on the short-lived T.V. sitcom Ned and Stacey, Thomas Haden Church has been an untapped resource and with Sideways he’s been given the role of his career. As Miles’ crass, philandering best friend, he plays Jack as a middle-age frat boy who still calls women, “chicks.” Haden Church’s dead-panned delivery of smart-ass lines works well against Giamatti’s uptight straight man. Together, they make an excellent team.

For years, Virginia Madsen has been biding her time in direct-to-video hell and so it is great to see her in a high profile role like this one. From The Hot Spot (1990) to Candyman (1992), she’s always been an interesting actress to watch and with Sideways, Madsen is given strong material to sink her teeth into and she delivers a nuanced performance. Sandra Oh has been quietly building a nice body of work over the years and has been unfairly overlooked in the numerous awards that have been lavished on the film. Granted, of the four main cast members, she has the least amount of screen time but she makes every moment she has count.

The men are idiots in Sideways and it is the women who are smart and truthful. The men lie, cheat and are forced to face the repercussions of their actions. This provides them with a chance at redemption as embodied in Miles who learns to loosen up and finally let someone new into his heart. Payne’s movie hearkens to classic character-driven movies, like Five Easy Pieces (1970) and King of Marvin Gardens (1972), by rejecting traditional mainstream tastes in favor of presenting unsympathetic characters and a conclusion that refuses to wrap things up neatly.