The Magic of Kells 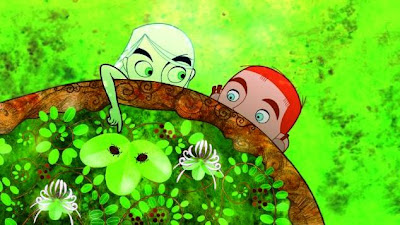 By VenetianBlond
The medium of film is a way to make magic — to show things that could not possibly be true, to show parts of our imagination that could not be re-created in any structural form, or to play with constants like time or space. The Secret of Kells does all of these things using a language of imagery from one of the most important examples of Western art still extant. The Book of Kells is an illuminated book of the gospels from circa AD 800, currently housed in Trinity College in Dublin. Illumination is the art of supplementing a text with decorated initials, borders and miniature pictures. If The Secret of Kells is not the true story of The Book of Kells, it’s still nice to think it could be.

This 2009 film was a surprise Oscar nominee for best animated feature. Young Brendan is a child monk in Kells, under the thumb of his austere uncle, the Abbot (voiced by Brendan Gleeson). The Northmen (Vikings) have been pillaging Ireland for gold, so the Abbot’s attention is directed solely on fortifying the wall around the monastery and village, rather than on the works of the scriptorium or on his young nephew. Even when a famous illuminator, Brother Aidan, arrives in Kells having fled the Northmen carrying a glorious but unfinished book, The Abbot refuses to allow anyone to spend time on anything but the wall. Brendan disregards his uncle’s admonitions and sneaks out beyond the wall into the forest to find berries for ink. He meets Aisling, a spirit who saves his life, “twice!” The Northmen do eventually reach Kells, but the wall is no help as the village and monastery are burned. Aidan and Brendan flee with the book, and because Aidan’s vision is failing, it falls to Brendan to complete it. As a young man, he returns to Kells to reunite with his uncle, and where the book becomes known as The Book of Kells.

The film is resolutely 2D, which leaves plenty of room to make impressions rather than direct representations. The Viking Northmen are less men than red-eyed minotaurs, and due to their sizes and shapes, the monks fit together in a single unit. In fact, much of the background is drawn from the tessellated patterns found in illuminated texts. The artistic style does not use modern techniques of perspective, but rather reflects the artwork of the time it depicts. The style accomplishes two things: it shows Brendan’s childlike point of view, and it also emphasizes the geometry of the natural world that becomes art once human creativity joins the party. The film is itself the Book, which becomes evident at the end, when patterns we’ve seen are shown in their actual context on a real page.

But the geometry is not the fun part. An Aisling is an Irish poem in which a dream woman appears. To Brendan she is a little girl with white hair longer than she is tall who disappears to reappear in impossible places. She makes flowers grow with a breath, and she asks the forest where to find the berries that Brendan seeks. She is alone, as Brendan is alone, and in the manner of children, it takes about 20 seconds of mutual wariness before they become friends. The wonder of it all remains intact, for Brendan accepts her magic with nary a “how did you do that?”

Brendan himself is magical in the most practical of ways. He defeats Crom the evil spirit using his talents as an artist to use line and space. Then he gains a crystal, which he uses as a tool to assist him with the details in his images. The crystal could have a mundane explanation, but Brendan thinks it’s magic. Watching The Secret of Kells, it’s still nice to think it could be.

VenetianBlond is an international student adviser in Seattle. She reviews children's theater for Seattle's Child magazine and blogs David Simon's HBO series Treme at Watching Treme. Other words she strings together can be found on her blog VenetianBlond.