A '60s film search for a serial killer

By Edward Copeland
We've become so accustomed to movies about the hunts for serial killers, both real and imagined, that it's a bit unusual to see one that dates back to 1968. Granted, I would never have put The Boston Strangler into the Netflix queue if it hadn't been for the recent passing of Tony Curtis, but it was interesting to watch the film because it's more of a detached crime procedural than some of the serial killer romps that have come around in the past couple of decades. It also was surprising to find that as much as it's sold as a Curtis vehicle, we don't even meet him until the film is half over and the ostensible lead (if there really is a lead) is Henry Fonda.

Coming so soon after I caught up with Bong Joon-ho's Memories of Murder, which in turn reminded me of David Fincher's great Zodiac and an aborted attempt at watching The Red Riding Trilogy, it proved especially interesting to watch a film that was one of the forerunners of the low-tech large-scale murder investigation movies. (If anyone thinks I should have given Red Riding more of a chance instead of bailing out after watching much of part one, read Craig's great review at The Man from Porlock who did sit through all three and came to the conclusion I already was starting to form.)

Based on Gerold Frank's book about the string of slayings that terrorized the Boston area in the early 1960s, The Boston Strangler was adapted by Edward Anhalt (Oscar winner for Becket — talk about range) and directed by Richard Fleischer, whose filmography stretched all over the map from the solid thriller The Narrow Margin (1952) to Doctor Dolittle, perhaps the worst best picture nominee in history. His directing career stretched from 1943 to 1989 and included the good (Fantastic Voyage), the bad (Conan the Destroyer) and the ugly (The Jazz Singer with Neil Diamond). I'll let you decide where to place Soylent Green.

Thankfully, The Boston Strangler belongs on the list of Fleischer's better efforts and it takes some kind of director who can switch gears from the tomfoolery of Doctor Dolittle to the darkness of this story the very next year. He does go a little overboard with the use of split screen and multiple images projected at once. The technique can be very effective and works quite well at times here, but Fleischer uses it so much that it kind of wears out it welcome.

As in Zodiac, part of the problem for investigators comes from the murders crossing jurisdictional lines, meaning different departments have different pieces of the puzzle so Massachusetts Attorney General Edward Brooke (Marshall), who would later go on to become the state's first African-American U.S. senator, taps one of his lawyers John Bottomly (Fonda) to head up a task force to collect all the investigations under one umbrella. Bottomly has no interest in the job since he has no law enforcement experience — he'd rather keep working on eminent domain issues — but Brooke basically orders him, despite the fact that the state really doesn't have funds to provide him for his investigation.

Even before Fonda enters the picture, we get the grunt work of various detectives trying to get a handle on what kind of maniac has descended on their city, leading to possible suspects and many dead ends. Two of the detectives who stand out the most are played by George Kennedy, fresh off his Oscar win for supporting actor for Cool Hand Luke, and Murray Hamilton, the year after playing the cuckolded Mr. Robinson in The Graduate and one of the rare times I can recall Hamilton being a good guy (this was the Amity mayor in Jaws, after all). By now, it's a staple for homicide detectives to have a streak of dark humor running through their veins, and Hamilton actually gets some of those best lines, welcome because the tale needs levity to lessen the darkness.

At one point, Bottomly even consults a psychic who amazingly describes the scene of a murder and the contents of a letter they received from a seemingly troubled man named Eugene O' Rourke. They believe they have their man and go to question him and, while he's not the strangler, he does need psychological help. More importantly, he's played by William Hickey and having never discovered the man until his wonderful Oscar-nominated turn as Don Corrado Prizzi in John Huston's Prizzi's Honor, it's always great to find Hickey in another film, especially when he gets as meaty a scene as he does here.

When the film hits the hour mark, we suddenly meet Albert DeSalvo (Curtis) and see things from his point of view briefly through the last of his 13 murders. For fans of the TV series Dexter, his introduction will seem awfully similar to the fourth season scene when Dexter follows John Lithgow's character home and discovers that he's not the loner that he presumed but a family man. In fact, the scenes mirror each other so closely, I can't help but believe that the writers on Dexter had this movie in mind for that plot twist. 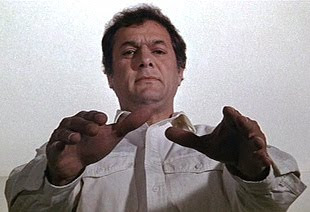 DeSalvo's capture and identification happens because of a series of mistakes by him and a happy accident on the part of Bottomly and Detective DiNatale (Kennedy). Because of DeSalvo's seeming inability to understand charges against him (which are unrelated to the murders), he's sent to a mental hospital. The remainder of the film mostly consists of Bottomly questioning DeSalvo, who they believe suffers from a split personality, to see if they can find the part of him that committed the crimes. When we first see DeSalvo in the room where he will be questioned, it is a blank room with just a table and a one-way window where people can watch him. He's dressed in all white and again it's hard not to believe that there's not some inspiration found in The Silence of the Lambs. Many of the obituaries for Curtis said that he was disappointed that he didn't get the Oscar for this and some even called it his best work and while he's very good in a part unlike any other he played, I still think his best is Sweet Smell of Success, followed by Some Like It Hot.

As it is, The Boston Strangler works best now as a time capsule item. It seems to have wanted to make larger points about helping people with mental problems earlier, but it almost seems tacked on as a justification.

As a footnote, I discovered an interesting thing as I searched IMDb for the name of the actor who portrayed the psychic. I'd forgotten the character's name and though I was fairly certain which actor it was, I didn't want to make a mistake. I thought perhaps if I perused the external reviews, I might stumble upon the answer but though I didn't, I did discover in reviews written at the time of release, one by Roger Ebert, the other by Renata Adler at The New York Times, that The Boston Strangler was viewed as quite exploitative at the time. Ebert thought it was a good film, but questioned if it should have been made and was disturbed by the reaction of two young girls and its promotional materials while Adler found the movie absolutely repugnant.

Is my generation (and those coming up behind) really so jaded that we view something such as The Boston Strangler as tame? Is there some truth to the idea that mass media has hardened our hearts and minds to the point that we're harder to shock? It's sort of a running gang between me and a friend whenever some talking head declares "the loss of our innocence," how many times does that make that we've lost it now?

A key scene of the movie takes place on the day of JFK's funeral. When I was growing up, we knew about all of the upheaval of the 1960s: the assassinations of JFK, RFK and Martin Luther King as well as Vietnam. When John Lennon was murdered and Reagan and Pope John Paul II were shot and Sadat assassinated in an 11-month time period, they didn't hold the same trauma because we all knew of the ones before we were born and while they were awful events, it almost seemed like business as usual in our dangerous world. It really took horrific events such as 9/11 and the Oklahoma City bombing to capture our attention and leave scars, because those catastrophes were beyond our imaginations.

On the other hand, should people be protected from the horrors of the world to the point that when they grow up and learn of them, the shock could prove too much to bear? The girls laughing that Ebert saw would disturb me too: Not feeling or having empathy is a bad thing, but not being able to deal with the fact that bad things happen isn't right either. Movies can be exploitative but, in the end, it's just a movie. It's the so-called news when it's exploitative that disturbs me more.

Comments:
This is a thought provoking review on many levels.

While I hate to put his feet to the fire for something written 42 years ago, I do take slight issue with Roger Ebert's assertion at the time that In Cold Blood "was the worthier film because it dealt with conditions that could have been changed, lives that might have been saved."

But it should be noted that in writing In Cold Blood (a great artistic achievement), Truman Capote was certainly cashing in on the individual tragedies faced by Smith, Hickock, and the Clutter family JUST as much as the Strangler film does. And Richard Brooks definitely watered down the cruelty of the killers in his film version of Blood a tad so that his argument against capital punishment, which is very preachy by the final scene, is that much stronger.

Thanks for the kudos. I've never seen this movie and am fairly ignorant of Curtis's work beyond the obvious ("Some Like It Hot," "Sweet Smell of Success," "Spartacus," etc.). It is amusing to learn that Fleischer directed this; the book "Pictures of a Revolution" suggests that his experience with "Doctor Dolittle" (or more specifically Rex Harrison) put Fleischer in the mood to kill somebody, so this subsequent project seems to have been appropriate.

Incidentally, Ed, have you ever seen another serial killer movie, early-70s I think, starring Richard Attenborough? I caught a bit of it once on TCM but can't remember the name.

I don't know if it's what you are talking about, but looking at IMDb he played the killer in the 1974 version of Agatha Christie's Ten Little Indians, but I don't really think of that a serial killer, just one of her murder mystery. I haven't seen that version, but the 1944 version starring Barry Fitzgerald and called And Then There Were None is great. All the films are about a group of people on an island getting killed off one by one, related to the 10 Little Indians poem so as the numbers dwindle, suspicion gets the better of the survivors but of course one of the "victims" had faked their demise and turns out to be the killer.

Ah, it was "10 Rillington Place" in which Attenborough played a serial killer. Quite a creepy little movie from what I saw of it. And directed by....Richard Fleischer! Guess he was still working out some anger issues.