A Laugh an Inch 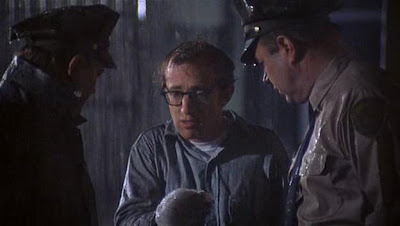 By Jonathan Pacheco
Probably the most famous thing about Woody Allen’s 1980 film Stardust Memories is the self-referential recurring joke of fans telling a filmmaker that they prefer his “earlier, funnier movies” to his more artistic efforts. Take the Money and Run is Allen’s directorial debut (after he virtually disowned What’s Up, Tiger Lily?), and serves as the epitome of the comic’s “earlier, funnier” era. The film is a parade of pure silliness, utilizing the type of humor I find endearing in the director’s older films but annoying in his recent efforts; I easily forget that this zaniness is still an integral part of Allen’s personality. Take the Money and Run is Allen before the trademark title card and Windsor font, before his patented “neurotic Jew” persona, before the incredibly long takes and beautifully understated cinematography. This is Allen 40 years ago.

In the mockumentary Take the Money and Run, Woody Allen plays Virgil Starkwell, a robber so incompetent you wonder why anyone would care to chronicle his life. In an attempt to escape prison, Virgil fashions a fake gun out of a block of soap, but walks out into the pouring rain only to be left with a handful of bubbly suds. When he tries to rob a bank using a threatening note, the teller instead argues with him about his handwriting. His parents wear Groucho Marx disguises out of shame during interviews.

Voice-over narration drives most of the film — particularly the first half — as we’re taken through Virgil’s history as an inept criminal. With the narrator doing most of the talking, the action on screen requires little dialogue, turning the film into something of a silent comedy. Despite being such a talker, Woody Allen loves the silent brand of humor, and plays it up in Take the Money and Run. It’s all in the way he moves his arms, shoulders, and face.

The heavy narration also allows the film to fly through the plot, and for a while, the film exists as a long string of quick setups and crisp zingers. The director hoped for every inch of the film to be a laugh, so the script wastes little time when jumping from joke to joke. It can be quite jarring to see a Woody Allen film moving along at such a rapid pace. Instead of 14-second shots (the average length in Annie Hall), Take the Money and Run features quick cuts lasting only a second or two before the film moves on to something else. The movie eventually slows down and you begin to catch signs of Allen’s future style at an early stage. Jokes are set up with more dialogue and scenes last a little long, using single takes. This pace difference creates a slight imbalance, but the contrast fascinates when you compare it with the director’s cinematic evolution over that past four decades.

These days, a good comedy provides its audience with plenty of hearty laughs, but is lucky to offer even just one show-stopping moment, causing that uncontrollable nearly-epic laughter, the kind that draws looks from other audience members. It’s the kind of laughter that causes you to miss the next bits of dialogue because you can’t hear over your own guffaws. It’s the kind that still has you chuckling three or four scenes later. Take the Money and Run provides not one, but several of these moments, some of which I remembered about and still laughed at uncontrollably. It makes sense that the film could have so many explosive moments, as it packs so many punch-lines into such a short running time. I see it almost like the filmmaker’s career: he makes so many movies that he’s bound to land a couple of great ones just from the law of averages alone.

These show-stopping moments are not just funny because the situations are absurd; they’re funny because Allen’s character is so sincere in these ridiculous circumstances. Virgil driving a car inside of a house trying to kill a woman but never breaking anything is pretty funny. What makes it outrageously funny is the brief shot of his face as he chases the woman, almost blank with determination. When Virgil plays cello for a marching band, it’s his earnest but unsuccessful attempt to play his instrument that makes me laugh, even as he must pick up his chair and move it along with the band every few seconds. When he tries to smuggle guard uniforms out of the prison laundry room by putting them on under his own clothes, his outrageously puffed up appearance is only half the joke, the other half being the self-congratulatory smirk on his face. Different people tell jokes in different ways. Some laugh with you the entire time they relay the story, barely able to finish telling it; Seth Rogen or Will Ferrell films usually exude that same personality. Take the Money and Run, with its pseudo-documentary style, is the straight-faced joker. His words are silly, absurd, and hilarious, but his face is always serious, making the story that much funnier.

Once Annie Hall took off in 1977, it seemed that Woody Allen’s style and persona were set in this perfect balance of comedy and bittersweet insight. For too long, any deviations to the more slapstick or dramatic were seen as detours from the “right path for him.” To remember Take the Money and Run, in all of its unapologetic wackiness, imperfect freneticism, and simple endearment, is to remember a time when the director was unafraid to let his nutty side out. Allen’s no longer the same man who made the “earlier, funnier movies,” but he’s still got that side in him.

Comments:
Woody's "early funny ones" seemed to build, with each one topping the previous, culminating with Love and Death. When he did Annie Hall and took the next great leap, those films have seemed more scattershot in terms of quality. One thing seems certain: He's pretty much at sea without a muse, be it Keaton or Farrow. Whatever Works was the most entertaining film he'd offered in quite some time, but I find it interesting that it was a script that had been lying around since the 1970s.