She has to talk loud: She's an American 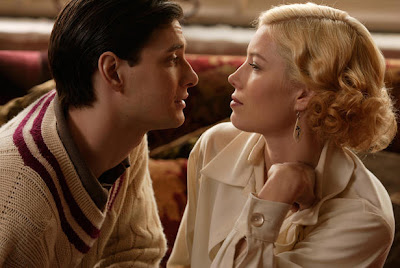 By Edward Copeland
The dreary interiors of the English estate seem to belie the bouncy renditions of the period songs that permeate the soundtrack of Easy Virtue, the new film by Stephan Elliott (The Adventures of Priscilla, Queen of the Desert) based on an early film by Alfred Hitchcock. (Just kidding: That's my Ben Lyons joke for today.)

Easy Virtue actually is based on an early play by Noel Coward and while there are many sly laughs, it's not as eager to please as some of his later stage efforts would be.

No one is more outraged than the Whittaker family matriarch (Kristin Scott Thomas) who finds Larita totally unsuitable, though she harbors other ulterior motives for being against the match as well.

Colin Firth plays the family's patriarch and gives the film's finest performance as a lost soul, done in by his experiences during World War I. He wandered the world carousing until his wife found him and brought him home, where he now haunts the estate as if he's a ghost.

Thomas, as one would expect, turns in a fine performance as well but the real surprise is Biel who holds her own nicely with the other players.

Easy Virtue certainly turns out to be a watchable enterprise with some nice laughs even with its serious undercurrents, but the musical choices, while era appropriate, seem out of place with the mood of the film itself.

Comments:
This movie keeps popping up everywhere. I guess i should check it out. How was Kristin Scott Thomas in this. I love her. I really do.

Thomas is as good as she always is, even though she's playing a bit dowdier and nastier than she usually does.