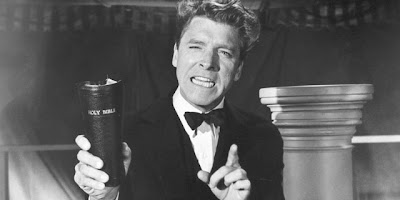 By Matt Maul
On the 50th anniversary of its release, many of the same issues addressed in Elmer Gantry, Richard Brooks’ 1960 adaptation of the Sinclair Lewis novel, are very much a part of the current debate between aggressive people of faith and the more secularly oriented segments of society. Front and center in the narrative is a display of Christian organization leaders engaging in shameless self-promotion, bitter turf battles, frenzied attempts to influence public policy and hypocrisy in the conduct of their personal lives which seem at odds with the person for whom their dogma is named. However, I think it’s interesting to note that unlike the works of celebrated contemporary atheists such as Richard Dawkins or Christopher Hitchens, Elmer Gantry ultimately honors the underlying religious principles that most of the characters observe only in the breach.

While the novel takes place over a much broader time frame, Richard Brooks compresses it to focus singularly on an episode where Elmer Gantry (Burt Lancaster, in an Oscar-winning performance) becomes involved with Sister Sharon Falconer (Jean Simmons) and her revivalist church. In the film, a down on his luck Gantry opportunistically applies talents developed as a failed traveling salesman to become an effective preacher in Falconer’s road show. His influence helps make Falconer and her movement an overnight sensation. While Lewis presented the pair as equally unscrupulous in their ambition, the Brooks script pulls its punches and allows Gantry and Falconer to be likable people in spite of their many faults. 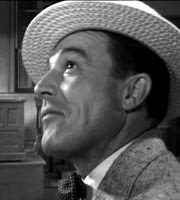 For the film, Jim Lefferts (Arthur Kennedy), Gantry’s friend and college roommate in the novel, becomes an agnostic reporter and counterbalance to Gantry. While here he’s more integral to the plot, Kennedy’s role is similar to one he’ll play two years later as Jackson Bentley in Lawrence of Arabia (T.E. Lawrence a god-like character himself). Lefferts and Bentley both function as a sort of Greek chorus for the audience. Interestingly, reporter E.K. Hornbeck (Gene Kelly) from Inherit the Wind also provides a running commentary as the “God debate” progresses in that film. It’s significant that journalists are used as story elements operating to deliver the “bad news” in seemingly deliberate opposition to proponents of the Gospels.

I mention Inherit the Wind because, like Elmer Gantry, the sting of the agnostic/atheistic stance is somewhat diminished as the characters arguing that position seem to retreat from a full blown attack on the views held by people of faith. In fact, at the end of Inherit the Wind, Henry Drummond (Spencer Tracy) reveals himself to be a closet theist (“Matt Brady got lost because he looked for God too high up and too far away”).

As Gantry, Lancaster appropriately chews the scenery where needed to bring life to the character. Many of the actor’s closest friends have commented that they found the preacher to be an uncannily accurate reflection of Lancaster’s own real personality. While the former acrobat puts on a display of unbridled physicality that may for some seem over-the-top today, I found it a truly enjoyable performance. Witness how Lancaster does suitably turn it down a notch when Gantry is not required to be “on.”

Jean Simmons is OK as Falconer, I suppose. In three important "serious" roles of her career from around that same time (The Big Country, Spartacus and Elmer Gantry), I can’t give her more than “adequate” marks. But, that may just be me. For what it’s worth, I loved her in The Grass is Greener. 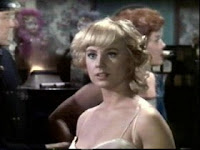 On the other hand, Shirley Jones (who won an Oscar), practically steals the show as Lulu Bains — a former lover whose extortion plot against Gantry leads to his downfall. Brooks famously didn’t want to cast Jones and it was only the insistence of Lancaster himself that won her the part. Jones manages to be simultaneously sexy, innocent, tawdry and sympathetic (Did I mention sexy?). For those only familiar with Jones as Mrs. Partridge, this film may itself be something of a revelation.

As I said earlier, while Elmer Gantry may indeed provide solid commentary on the negative aspects of organized religion, in the end, it waters down the thrust of Sinclair Lewis’ satire. When a fire of biblical proportions breaks out at Falconer’s tabernacle by the pier, the literary Gantry knocks people out of the way to secure his own safety. Lancaster’s Gantry has more in common with other heroic figures he has portrayed over the years and vainly tries to save the day. Likewise, the novel ends with the unsavory Gantry continuing on in the religion business. However, the cinematic Gantry walks away from the mission to leave it in more capable, and by inference, more morally suitable hands. As he exits, Gantry quotes from the Bible: "When I was a child, I understood as a child and spake as a child. When I became a man, I put away childish things."

I’m not sure which version of Gantry I prefer. As a person of faith myself, I’m probably more comfortable with the Brooks’ interpretation. And it certainly is a very entertaining and worthwhile film. However, in living up to the thrust of what Lewis sought to communicate, Monty Python’s Life of Brian is probably (and ironically) more successful.

Comments:
I have to disagree with you about Simmons. I thought she was great and underrated in general (though I do agree about how much fun she was in The Grass Is Greener). She gave a lot of good performances dating back to a young age as Ophelia in Olivier's Hamlet, but if you are a fan of noir, her role in Preminger's Angel Face is one of the great psycho femme fatales of all time.

While I stand by what I wrote, it was probably worded a bit more harshly than I meant it to. I don't take anything away from Simmons' talent. She had the chops. But, for the most part, I never felt anything come off the screen in her film performances. Like I said, it's probably just me.

BTW, the Blogger word verification I have to enter for this comment on Elmer Gantry is "godso" -- coincidence, I think not ;)

A bit late to the party, but I enjoyed Matt’s take on the literary vs. the filmic Elmer Gantry. No question that the 1960 movie from Richard Brooks bowdlerizes the Lewis novel. (One example: The film makes Gantry’s denomination unknown, a way to disarm critics in religious circles; in the book Gantry was a Baptist and later a Methodist.) In researching a book about the writer-director, “Tough as Nails: The Life and Films of Richard Brooks,” to come out in spring 2011, I read quite a bit about Brooks and his take on the novel. He met Lewis around 1945 and told the novelist that he wanted to turn the book into a movie some day. Lewis advised Brooks to read the criticism that accompanied the book’s publication in the late 1920’s. Lewis seemed to agree with critics who found Gantry too much; he advised Brooks to not be afraid of the book. And Brooks wasn’t – he freely changed the storyline, as Matt notes, to accommodate a stronger focus for a 2 ½-hour film. Brooks’ wife, Jean Simmons, told me that he was a spiritual man, a man of all faiths who didn’t necessarily believe in a God on a throne above. (Brooks, btw, was Jewish, born Ruben Sax.) But Brooks was easily angered by injustice, and he saw Gantry as a thief of faith, stealing from the faithful. No wonder that for decades the Hollywood censors had waved off anyone who even considered adapting the book for a film. It happened in 1960 because Brooks believed the material was worthwhile and because tastes had changed enough to make room for challenging films like “Elmer Gantry.” – Douglass K. Daniel