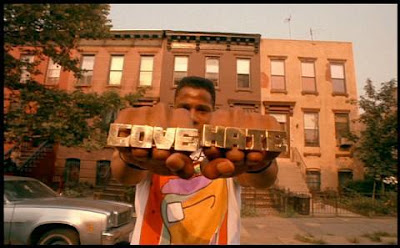 By Jonathan Pacheco
It’s been widely reported that on his first date with his eventual wife, President Barack Obama took Michelle to see Spike Lee’s electrifying film, Do the Right Thing. It’s not only possible, but likely that the thought-provoking movie affected the thinking of the man who would become this country’s first black president some twenty years later. Many may not admit it, but there was an unconscious Utopian consensus that the beginning of the Obama Era represented a devastating blow to racism in America. While it marks a historical step forward, rewatching Do the Right Thing reminds me how far we still have to go; the film has lost little of its power and relevance in 20 years as it presents complex characters capable of good and evil, and raises more questions than answers regarding our solutions to racism.

Do the Right Thing is razor thin on plot: all we have are situations. Brooklyn blazes in the hot summer and tensions — specifically racial — rise to an all-time high. Sal (Danny Aiello) opens his pizzeria just as he’s done every day for the last 25 years, but his son Pino (John Turturro) is fed up with the black and Hispanic patrons of the neighborhood, warning his brother Vito (Richard Edson) to never trust them, specifically the restaurant’s black delivery guy, Mookie (Spike Lee). A myriad of other characters populate this neighborhood, pontificating on stoops, playing in the streets, observing from the sidewalks.

It’s difficult for me to call Spike Lee “subtle” as his characters exhibit many of the same qualities made me fume during Paul Haggis’s Crash. I was just a toddler in 1989, but it’s hard for me to believe that so many people coexisting in the same area simply walked around all day throwing racial slurs in everyone’s face. Isn’t that what people bashed Crash for? For being unrealistically and offensively blatant in its portrayal of the people of Los Angeles? Working in Lee’s favor is the fact that, despite the filmmaker’s insistence that the whole city of New York existed under this climate at the time, his story only centers around a single neighborhood in Brooklyn. It’s much easier to believe that one small area could be so outwardly racist than it is to believe that all of Los Angeles is that way, as Haggis would have you believe.

So while Lee uses heavy-handed storytelling frameworks and techniques to provoke (with the racial slur montage being the chief example), he takes the blatant and makes it feel subtle by enabling each character to possess both racist and non-racist qualities. Pino does nothing but complain all day about the blacks that come into the restaurant, yet Mookie points out that all of his celebrity heroes are indeed black, from Magic Johnson to Prince. Da Mayor (Ossie Davis) rants at the local Koreans in the morning, but ends up being one of the sole voices of reason in the evening. Even Radio Raheem (Bill Nunn), who seems to be a hardnosed menace with his boom box continuously blasting “Fight the Power,” shows some wisdom during his famous Love/Hate monologue.

More importantly, climactic character events don’t pop up out of nowhere. When Mookie breaks the dam by tossing the trash can into Sal’s window, it was not only the result of Raheem’s death, but also smaller, additional things. You must remember that throughout the entire film, Mookie’s been walking the line between Pino and the blacks, trying to keep the peace and not take offense at the man’s ignorance, but at the same time wanting to stand up for himself and his race. Also remember that, although Sal has generally been good to Mookie, even calling him a son, the owner of the pizzeria takes a liking to Mookie’s sister that makes the young man uncomfortable with his boss. By the time Lee shows Mookie rubing his face outside of the pizzeria, the mob raging over Raheem’s death, the weight of the entire day is finally pressing down upon him. 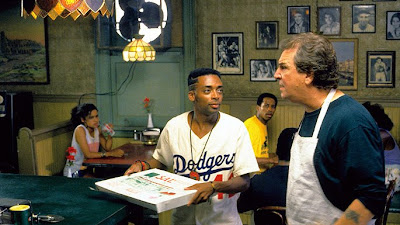 Because of the nature of the plot and the giant cast of vibrant characters, entire sequences don’t stand out nearly as much as the moments and monologues. Danny Aiello’s performance deserves its Oscar nomination, particularly for Sal’s conversation with Pino, as the father explains to his son why he’ll never move his restaurant. He points out that those kids, those young adults sitting out there in the neighborhood — they grew up on his food. They love his pizza, and that makes them valuable — not because of their business, but because they fulfill the old man’s purpose in life. Do some of them want him and his Italian family to get out of their predominantly black neighborhood? Sure. But most of them love the family and appreciate the service they provide. Aiello’s Sal has his own prejudices, but he’s intelligent and human enough to mostly ignore his own racism and that of others because he knows that there are more important things than skin color and countries of origin. I get the feeling that he hopes he can be an example to his sons and his patrons in that respect. What’s heartbreaking is that at the end of this conversation, Pino stomps out to scare off a pestering patron, completely ignoring his father’s words.

The most moving speech comes from the great Ossie Davis’s Da Mayor, the neighborhood’s mainstay drunk. He ambles through the streets flirting with Mother Sister (Ruby Dee) and dishing words of wisdom (ambiguously telling Mookie to “always do the right thing”), but when some teens heckle the old man, calling him a bum, his well-hidden anger bursts through. As he shares his stories of being unable to feed his starving children and wife, he does so with fire, fury, and guilt. Spike Lee incorporates themes of fathers unable or unwilling to provide in many films — from Crooklyn to He Got Game — but Davis takes this short soliloquy and carves such a painful, affecting, special moment out of the film.

However, the movie’s most famous speech belongs to Radio Raheem as he relates the theme-defining conflict between Love and Hate, symbolized by his giant brass knuckles. The young man tells of Love’s struggles with Hate, but also of Love’s ultimate victory. But through the tragic death of Raheem at the hands of negligent cops, Lee tells us that Love can’t always get the knockout. When Raheem falls to the ground dead, Lee frames the shot so that we only see his right hand — the one with the Love brass knuckles — lying there next to him, dead as well. And when Mookie has made his choice of violence shortly afterward, it’s with a yell of “HATE!” that he sends the trash can crashing through Sal’s window.

Now, some people still question whether Mookie “did the right thing,” claiming the film leaves this ambiguous. This view is fueled by the seemingly conflicting quotes that Lee adds at the end of the film — one from Martin Luther King, Jr. (representing the Love fist), stating that no violence is ever justified, and one from Malcolm X (representing the Hate fist), claiming that violence in self-defense isn’t necessarily violence — it can be seen as intelligence. But the question isn’t whether Mookie did the right thing by smashing the trash can into Sal’s window, inciting a riot that would burn the business to the ground. Lee has made it clear that he doesn’t question Mookie’s decision, as he’s said many times that only white people raise that question; black people seem to “get it” already. By smashing that window, Mookie chose Hate as a declaration of self-defense; they will not tolerate what happened to Radio Raheem. Not only is it intelligent in that it refuses to give the oppressors the upper hand, but I would argue that it benefits Sal and his family (seen by most as the enemy, despite the fact that they weren’t responsible for Raheem’s death). By leading the charge to tear down the pizzeria, Mookie, consciously or not, directs the hate-fueled energy of the mob towards a building, and not a human. Mookie could just as easily have thrown that trash can at Sal or Pino or Vito, and the crowd would have followed. Instead, the Italians are able to stand across the street in relative safety, the mob having no interest in them at all.

The true question that Lee asks is this: when is Love “the right thing,” and when is it Hate? Immediately after Raheem’s death, Mookie stood with Sal and his family, facing the mob in apparent union, but he finally decided that these circumstances called for him to choose the other side. The next morning, when Sal expresses his anger at Mookie’s choice to smash the restaurant window, Mookie shoots back with, “Motherfuck a window, Radio Raheem is dead.” Or, as Lee puts it, it’s a black man’s life vs. a white man’s property. Does Mookie’s decision solve everything? No. Vito, at one point feeling that Mookie was his only friend, now feels betrayed by Mookie, and Pino feels vindicated in his racist beliefs. Most of all, Sal has been betrayed after serving and loving the neighborhood, with his business of 25 years sitting in ashes. But a man’s life was carelessly taken. Hate was the right thing in that situation. “Motherfuck a window,” indeed.

The philosophies of Dr. King and Malcolm X aren’t meant to be presented as opposing, “one or the other” decisions. Lee believes that it’s important to incorporate both, as they are not mutually exclusive, just as the Love and Hate fists both belong to the same body. If there were any doubt, just look at the final image of the film as it fades to black: Martin Luther King, Jr. and Malcolm X — the two fists — shaking hands, smiling.

Just like the Obama presidency, Do the Right Thing doesn’t contain the cure for racism; that was never Lee’s intention. The man just wants you to open your eyes and think about what you’re really seeing. These vibrant, well-played characters represent the problems that we still face in full force today. The eventual solution to racism will most likely contain ambiguity and shades of grey, but Lee challenges us to look at our individual situations, observe them, then do the right thing.

Comments:
It's been a few years since I've watched it, but when it came out, I must have watched it 10 times at least in the first two or three years after its release. I was even compelled to write two reviews because I felt I had so much to say (and my college paper had only so much space). It's silly to remember all the teeth-gnashing some people did like writers predicting that it was so incendiary that it would spark riots in theaters showing it. I just knew it was one of the best films I'd ever seen. I just wish that, though he's made good films since, Spike Lee could approach that greatness again some time. Then again, Orson Welles started with Citizen Kane and never equaled that either.