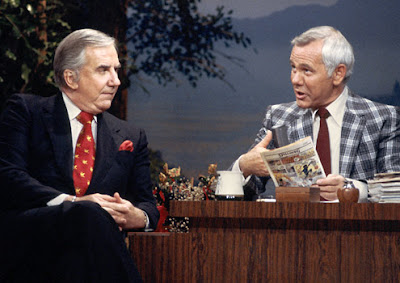 While Ed McMahon will inevitably be connected with the man seated to his right in the photo above, McMahon also was an omnipresent figure throughout most of my lifetime right up until his death early today at 86, and it wasn't always as sidekick, though he may as well have invented the term and future dictionaries should include his picture next to the definition of the word.

His relationship with Johnny Carson on The Tonight Show lasted for 30 years beginning in 1962, but their partnership actually began five years earlier on a quiz show called Who Do You Trust? (which was originally called Do You Trust Your Wife?)

Even earlier TV work for McMahon included being the announcer on a show called Bandstand before it was later rechristened American Bandstand.

He did some acting as well, on episodic television and in film, including Butterfly, the movie that brought Pia Zadora into our consciousness and ruined the Golden Globes' reputation forever. Personally, I remembered his role most vividly in the original Fun With Dick and Jane.

Still, McMahon's greatest role was himself as sidekick, announcer, host and pitchman from TV's Bloopers and Practical Jokes, Star Search, promiser of large checks, Warren Beatty's remake of Love Affair, many sitcoms and perhaps my favorite, showing up drunk at Hank's bachelor party on The Larry Sanders Show.

Sadly, McMahon's final years were rough ones, caught up in the collapse of Countrywide and threatened with foreclosure on his home despite severe health and back problems until Donald Trump swooped in to help save the day.

Comments:
McMahon did a credible job as one of the terrorized subway passengers in Larry Peerce's The Incident.