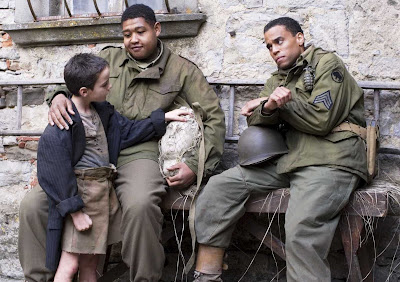 By Edward Copeland
When I first started seeing ads about Spike Lee's Miracle at St. Anna last fall, it sounded quite interesting and I hoped maybe Lee was going to produce another winner after Inside Man. Instead, the film seemed to vanish as soon as it appeared. Now that I've seen it, I can understand why. Lee could have made a great movie about the seldom-told tale of the contribution of African-American soldiers in World War II. His film ended up being a muddle of that story, framed by an unneeded device with some magic realism thrown in.

The film begins in 1983 when a Post Office employee watches an old John Wayne WWII movie and mumbles that "We fought in that one too." Before we know it, he's at work, pulling out a gun and shooting a customer dead. As police search the old man's apartment for clues, they discover a priceless Italian relic that once was part of a bridge the Nazis destroyed in the war.

A young reporter gets a chance to interview the old man to try to get the story out of him and then the story unfold in flashback. Some of the war scenes are great and I'm sure there are incidents such as the one where a racist white soldier refuses to believe the black soldiers have made it as far as they say they have and fires mortars and different coordinates than they give him, putting the African-American troops in danger.

As a result of this battle, four surviving members of this Buffalo soldier unit hole up in a small Italian village that the Germans have abandoned. The soldiers bring with them an injured boy who speaks constantly to an invisible friend and befriends the largest, slightly slow member of the soldiers, whom the boy calls his "chocolate giant."

That's a lot of plates that Lee needs to keep spinning in the air and he doesn't need to be spinning that many. You have to be paying close attention (and then it might only be a guess) to understand why the aging former soldier kills the customer but more importantly, it's a framing device for a film that doesn't need one (You don't even want to know about the ending framing device, which makes the old Private Ryan wailing at the Normandy graves "Am I a good man? seem positively understated.)

What a great movie Lee could have made about the Buffalo soldiers, even incorporating the time in the Italian village. You watch the film and are constantly reminded of what a powerful and talented filmmaker he is, but his weaknesses seem to get the better of him too often.

For one thing, the movie is too long. For another, STOP LETTING TERENCE BLANCHARD SCORE YOUR FILMS AND STEP ON YOUR SCENES. I swear, in one battle scene, you can barely hear the gunfire over Blanchard's blaring.

What really dooms this film is something that is unusual for a Spike Lee film: There isn't a distinctive character to be found. Even in his worst films, there are usually good performances and characters. Here, everyone seems bland and uninteresting.