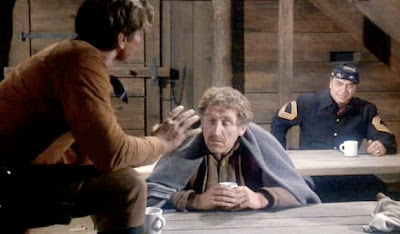 Many actors earn Oscar nominations for their film debuts, but that doesn't make the feat any less impressive and James Whitmore did that for his first film outing in William Wellman's 1949 film Battleground about the World War II Battle of Bastogne. It was the beginning of a long and illustrious film career, though Whitmore, who died Friday at age 87, left his mark on the stage and television as well.

The year before Whitmore got his supporting actor nomination for Battleground he received a Tony Award that is no longer given for Broadway excellence: best performance by a newcomer in Command Decision.

In 1950, he got to work with John Huston in the classic crime film The Asphalt Jungle. Huston used his distinctive voice again the following year in an uncredited role as the narrator of his adaptation of The Red Badge of Courage.

Those distinctive vocal chords gave life to the angel in the original version of Angels in the Outfield that same year. Though not cast in any of the major singing roles, Whitmore also showed up in the film versions of Kiss Me, Kate and Oklahoma! In between, he had to help battle mutant giant ants in the cult sci-fi classic Them!

Toward the end of the 1950s, he began to appear frequently on television, usually on the many theater programs as opposed to series. He still made features, including The Deep Six in 1958.

As the 1960s came along, he did begin to make guest appearances in series such as Wagon Train, Ben Casey and The Twilight Zone. In 1964, he starred in the screen adaptation of Black Like Me about a white reporter who went undercover as an African American to try to get a better look at racism in the United States.

He put on more elaborate makeup as the president of the assembly in the original Planet of the Apes. During the 1970s, he developed a taste for playing historical figures in one-man stage shows. His repertoire included Will Rogers, Teddy Roosevelt and Harry Truman. The film version of his Truman show, Give 'Em Hell, Harry, earned him his second Oscar nomination in 1975.

He still appeared in films and on TV. In 1973, he starred as a groovy professor in The Harrad Experiment, a film about free love that I dare anyone to try to watch with a straight face today. Among his later, most memorable film work was as Brooks in The Shawshank Redemption, the old inmate who'd been "institutionalized" because he'd been jailed and couldn't deal with freedom at such an old age and said, "You better get busy livin' or get busy dyin.'"

Through his gigantic body of work, there are numerous things that bear the marking that James Whitmore was here.