To laugh or not to laugh 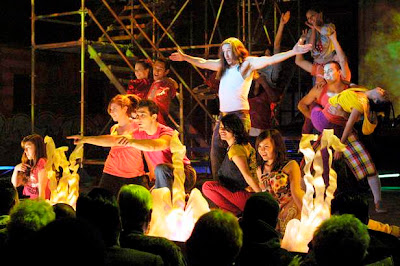 By Edward Copeland
When it was first being previewed, I have to admit that the idea of Hamlet 2 appealed to me greatly. I have a soft spot for bad taste if it's done smart and well and while the movie has a talented cast and a lot of laughs, it just doesn't quite get there.

Directed and co-written by Andrew Fleming who made the underrated comedy Dick (but also was responsible for the remake of The In-Laws), tells the story of an insanely committed high school drama teacher in Tucson, Ariz., who stages bad re-enactments of movies until he learns that budget cuts are going to mean the end of his department altogether.

He decides to write a bizarre, original show to save the department and purge some demons. What makes Hamlet 2 work as well as it does is it has an actor as insanely committed to the role of the teacher as the teacher is in Steve Coogan. He is a tornado of energy, a comic marvel as he spins from one situation to another from spoofing inspirational films such as Dangerous Minds while finding a worthy comic partner in Catherine Keener as his miserable wife.

Another great gag in the film is Elisabeth Shue as herself, who has supposedly quit acting to become a nurse.

There is a lot of politically incorrect humor in the film, mostly in the production they are staging itself, but unfortunately they don't show us a lot of it. I for one would like to see how Cheney figures in to the show and to watch the part where Satan and Dubya French kiss.

The big musical number, "Rock Me Sexy Jesus," is funny and I would love to see it get an Oscar nomination, though it still won't be as cool a nomination as "Blame Canada."