A song without the lyrics 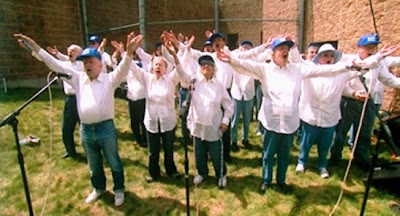 By Edward Copeland
Documentaries can take many forms, but essentially they face the same task as a fiction film: to tell a story or expand on one already known. That's what so puzzling about Young@Heart, which is great fodder for a documentary. Unfortunately, the filmmakers didn't bother to include much in the way or research or reporting.

The film chronicles a chorus of senior citizens that tours the world singing rock and pop classics, drawing huge crowds and delighting audiences. The performances are fun (such as "I Wannna Be Sedated") and touching ("Forever Young," sung after a chorus member's death), but aside from getting to know a bit about some of the chorus members, we learn nothing about when or how the chorus was formed.

Chorus director Bob Cilman is a big focus, but we know next to nothing about him by the time the film is over.

Directed by Stephen Walker (who might be the narrator, I can't even say that with certainty), we know that the chorus has toured Europe, but with the frail health of so many of the singers no mention is made of what if any precautions are made.

You have to assume that the chorus has achieved a certain degree of success and been around awhile, but the documentary never tells you when the chorus began or how the seniors were even chosen for membership. Were there auditions? As members die, do they audition for replacements? Where and how? If Stephen Walker has an idea, he's not sharing it with us.

In fact, he doesn't even bother to introduce us by name to all of the principal chorus members who play crucial parts in the film. It's all really sort of a shame because I'm sure there is a great story to be told about the Young@Heart chorus and unfortunately this film doesn't tell it.

The enthusiasm and show-must-go-on spirit of the singers is the only reason Young@Heart works as a film at all since as a documentary, it is nearly a complete failure.