Cut to the Zwick 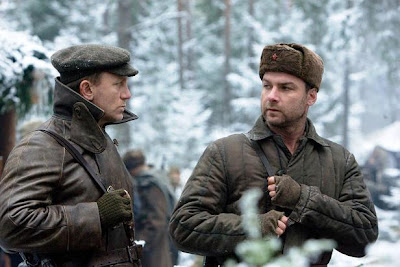 By Edward Copeland
Director Edward Zwick has an incredible, little-known true story of World War II to tell in Defiance and that's why it's so frustrating that he seemed determined in draining all of the life out of the episode and turning it into a monotonous debate.

Daniel Craig, Liev Schreiber and Jamie Bell star as three Jewish brothers in Nazi-occupied Poland who led a resistance against the Germans from within the Belorussian woods while sheltering an ever-growing number of Jewish refugees.

Craig continues to show his considerable range. He's not going to be locked into a James Bond stereotype when he simultaneously starring in films like this or playing gay murderers in the other Truman Capote biopic, the underrated Infamous.

The problem with Defiance is that it so quickly becomes a bore. The Bielski Partisans as they came to be known started out as a group robbing the homes of Jews collaborating with the Germans to survive. It also turns into a case of seeking vengeance on those who would help the Nazis, killing them at times prompting a seemingly endless argument between Craig and Schreiber about whether or not that makes them just as bad as the Nazis, a debate that later shifts between other characters as the movie drags on and on and Schreiber's character leaves the hideout in the woods to help fight with the Russian Army.

As a result, aside from Craig, no one seems to develop much in the way of characterization as they become mostly props or pawns. Not helping Zwick's film is its washed-out look, which just makes it even dull to look at. When it gets to fighting scenes, especially the climactic battle, it looks like Zwick merely restaged his melees from Glory and The Last Samurai with actors in costumes from a different era.

It's a shame, because Defiance definitely has a fascinating story to tell. It just seems as if Zwick was determined to keep the fascinating out of his film.