Indy in Peril: An Action-Scene Breakdown

BLOGGER'S NOTE: This post is for the Indiana Jones Blog-a-Thon being coordinated by Ali Arikan at Cerebral Mastication.

By David Gaffen
In some ways Raiders of the Lost Ark was the blueprint for the modern-day action film. Owing much to the cliffhanger-scenarios beloved by the likes of Steven Spielberg and George Lucas in the 1950s, the filmmaking showcases the deft ability of Spielberg to enhance character, move the story along (even if this four-and-a-half minute sequence to be discussed only barely moves the meter as far as the plot is concerned), and entertain the audience.

The scene in question is where Indiana Jones, realizing that the Ark of the Covenant is to be placed on a plane and flown out of Egypt, sets out to sabotage the plane. Just about every shot advances the situation, or introduces a new piece of information about that particular scene. All in all, this scene is superfluous to the plot — had Indy been able to get hold of a well-placed grenade, the entire scene could have been covered in the span of 20 seconds.

The scene starts ordinarily enough — Indy sneaks around the plane to grab the pilot and is confronted by another officer who he easily smacks around.

Here’s where the fun begins. With John Williams’ score highlighting each new shot, we see a shot of a big bald German, played by Pat Roach, coming out of a thatched tent, already with his shirt open. It’s clear he’s large and muscular — all the information needed at that moment. Spielberg holds the camera at about waist level, so the audience gets a better idea of how imposing he is as he removes his shirt.

Then we’re back to shots of Indy fighting with the smaller Nazi. As we see their feet moving in the foreground, Marion Ravenwood approaches, which illuminates the character’s willingness to take risks similar to Jones. Then another shot of what is to come – as Indy knocks out the smaller German — in the background, the big shirtless dude enters the frame from the foreground.

He taunts Indy — with reaction shots of the pilot, who now realizes what’s happening. But as it is with action tropes of this type — which the movie so successfully subverted earlier when Indy shoots the swordsman — this time, he takes the bait. From an intellectual level, it happens to be his only choice — rush the pilot, and he gets shot.

Another shot ups the stakes — Marion removes the blocks keeping the plane from moving. And then we’re back to the large German and Indy. Spielberg’s sense of humor is illustrated here, briefly, as Indy feigns weariness and then looks at the ground to try to dupe his opponent into doing the same. He does — but to no avail as the German takes a kick to the groin without flinching, and in a magnificently choreographed mid-ground shot, slams a fist into Indy’s nose, causing his knees to buckle as he hits the sand.

Within a few seconds Spielberg has boosted the tension — Indy is facing a much more formidable opponent, and he’s also not all that, either. The peril increases with a few rapid fire edits: a shot of the pilot pulling his gun, firing at Indy when he attempts to run, putting Jones in further jeopardy. A quick cut from the gun firing, and then back to the fight, as a fist comes in from off-screen to hammer Jones in the face again.

The camera shifts its view — now it’s behind the pilot, aiming his gun at Indy, with the German in the way, until from off-screen Marion clocks the pilot with the blocks previously used to hold the plane in place. Of course this now makes matters worse — the pilot falls forward on the controls, causing the plane to move.

The escalation here is deliberate — slowly ratchet up the tension within a scene that is already filled with active movement, derivative of Hitchcock in its cleverness even if Spielberg still names the 1950s serials as his original inspiration. The elements added in are small, careful ones — a shot of the wing grazing a nearby fuel truck, which spills gasoline. Just as the large German was introduced as a potential opponent this is presented as a problem, the proverbial gun in Act I that has to be fired in Act II. (In the modern-day action movie, however, the gun is fired within a few minutes; the pilot is introduced as a potential foe only to be thwarted soon after. However, his removal as a threat isn’t done without introducing another threat — the moving plane, Marion locked in the cockpit.) 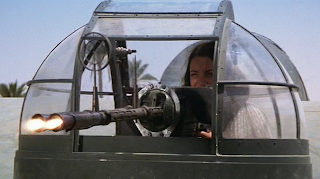 More peril is introduced — a truckload of Nazi soldiers across the runway, and here is where Spielberg takes a moment to show off the resourcefulness of Marion, who quickly fires off a few rounds from the prop, taking out the entire truck.

After Marion’s shots blow up a nearby truck and oil barrels, establishing shots of Belloq and the Nazi commanders are shown — making it clear that they realize what is happening, and in a sense this is what makes the entire scene a red herring, for now they make alternative plans.

Quickly we’re back to Indy, and the gasoline now runs in the direction of the plane — and the truck in flames. Never one to forget about minor characters, the first German defeated by Indy is roused by the gasoline, and is shown escaping – with an important shot of him outrunning the gasoline, which is now headed for the fire. This highlights the sudden compression of time Indy now faces, and it’s done without dialogue, or a hokey introduction of a stopwatch, villainous character intoning darkly about having “one hour to live,” or through some other ham-fisted approach.

The ultimate peril now clear, Indy rushes to save Marion, but the giant beckons still, and Indy unloads his best, but defeats him using a ruse — showing his resourcefulness; after all, he could have continued to unload with his fists, but instead plays hurt to cause the German to be bloodily hacked apart by the propeller of the plane.

Again, Spielberg expertly uses the foreground and background — Marion yelling to Indy that the door is stuck, while the fire spreads, igniting the stream of gasoline that heads back to the plane, as the Indy fanfare plays. The plane is moving to the left, as the camera moves with it (or ahead of it), as the two escape and the entire thing burns.

Unfortunately, this method of approaching action sequences would have unintended consequences when attempted by lesser filmmakers — long, drawn-out action sequences that serve only to highlight visual effects and sound design, but devoid of the charm of Raiders of the Lost Ark, and lacking the imagery that helped round out the characters of Indy and Marion. The Michael Bay-directed noise-fest The Rock has a pointless 15-minute car chase completely irrelevant to the plot that does little but test the eardrums; plenty of other films have contained similarly pointless action in the name of stretching a movie’s running time.

But back to Indy. Finally, we see a shot of the German commander moves the plot forward — as he tells a subordinate to put the ark on a truck, and demands “plenty of protection.” It’s another foreshadowing of the next brilliant sequence, the much-discussed car chase. But that is another article.

Comments:
Brilliant stuff. Thanks for taking part in the 'thon.