Something Old, Borrowed and Blue 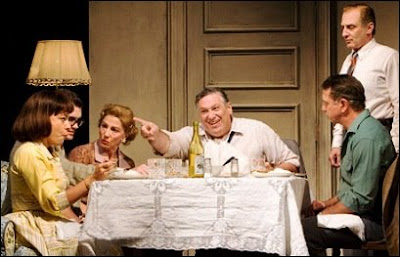 By Josh R
It has been said that surest way to divest your self of sanity, acumen and a sense of a proportion is to run for office. While all-too-recent history has provided no dearth of compelling evidence to support that contention, for the common man with neither the yen for power nor the clout to actualize it, planning a wedding will do just as nicely. As a guest and/or participant at many nuptial celebrations — thankfully, none of them my own — I have seen how quickly things can spiral out of control when delusions of grandeur meet the concept of buying on credit.

The same rule applies to the process of mounting a musical on Broadway, a folly reserved for those with deep pockets, a hunger for success and a commensurate lack of forbearance. Like marriage, commercial theater production is a highly speculative pursuit, requiring a great deal of expense and no small amount of optimism. In both cases, there is no guarantee of success — no matter how much money is spent, or how pure of heart the intentions are, the honeymoon can be short-lived.

The matrimony-themed A Catered Affair, the new musical currently in previews at The Walter Kerr Theatre and set to take its stroll down the aisle April 17, hedges its bets to some degree with a production that is modestly scaled by Broadway standards.

In an age of grandiose spectacle, it is admittedly refreshing to see a show whose creators don’t try to camouflage its simplicity by stacking it in tiers and burying it under a blanket of white icing. While admirable for its lack of pretension, and the fact that it manages to achieve an emotional resonance of the kind largely absent from most of this season’s musical offerings, this resolutely old-fashioned entry by composer John Bucchino and librettist Harvey Fierstein doesn’t quite make the grade as an affair to remember. Despite fine, heartfelt performances by Tom Wopat and Leslie Kritzer, and a beautifully calibrated one by the superb Faith Prince, this drab, homey little brown loaf of a show doesn’t leave any more of a lasting impression on the palate than the flashy confections it’s trying to outclass with its unadorned simplicity. With or without the frosting flowers, it’s still Betty Crocker, made from a mix and a bit on the bland side.

Adapted from the 1956 film of the same name, which featured Bette Davis and Debbie Reynolds in de-glamorized mode, A Catered Affair is nothing if not earnest. Like its source material — written by vaunted screenwriter Paddy Chayefsky before his sense of social indignation had crystallized into the lacerating acerbity of Network and The Hospital — the musical serves up a gentle, slice-of-life consideration of family dynamics viewed through the prism of working class struggle. Janey Hurley (Ms. Kritzer), a firm-minded young woman from a blue-collar family, wants to get married. Her boyfriend Ralph (Matt Cavenaugh) is only too happy to comply; together, they decide to have a simple, no-frills civil ceremony. Their plans hit a snag when Janey’s mother, Aggie (Ms. Prince), balks at the notion of a hasty City Hall marriage, and insists on giving her daughter a full-blown formal wedding — a course of action which not only runs contrary to the desires of the prospective newlyweds, but creates a financial burden that Aggie and her husband, Tom (Mr. Wopat), are not really in a position to assume. As the wedding plans become increasingly elaborate, tensions run high in a family already divided by deep-seated undercurrents of guilt, resentment, and grief that have never been openly acknowledged. Equal parts kitchen-sink drama and social commentary, A Catered Affair is at its most compelling when examining the manner in which the problems specific to poverty can take a harsh toll on the bonds created by birth and relation, or those forged through love and intimacy. As Aggie basically states, it’s hard for romance to retain its bloom when the bills keep piling up and sentimental notions are swept aside by the stark realities of daily routine.

Equally difficult is the challenge of bringing a sense of freshness and immediacy to a work of theater that feels so firmly grounded in the past. Director John Doyle, best known for his post-modernist take on the works of Stephen Sondheim, seems to be out of his element with the sort of hidebound material that doesn’t furnish a lot of room for creative interpretation; accordingly, his staging techniques tend towards clunky functionality. That said, the blame for A Catered Affair’s waterlogged condition can’t really be laid at the feet of the ship’s captain, given how less-than-seaworthy the vessel is. An obvious effort has been made to imbue the show’s low-key dramaturgy with a kind of careworn, old-fashioned charm, but since neither Fierstein’s libretto nor Bucchino’s substandard music and lyrics are particularly memorable, the lavender-and-old-lace nostalgia factor never really kicks in. As it is, the show can’t avoid seeming like a musty relic of a bygone era — the olfactory experience is less redolent of lavender than mothballs. One can understand the impulse to recreate the feel of vintage book musicals, of the sort that favor substance over style — but the approach is so humble and self-effacing that it’s like training your gaze on an old photograph that fades before your eyes.
Fortunately, there is one figure in the sepia-toned snapshot that remains as sharply defined as a work of digital imaging — specifically, the production’s leading lady. As the mother of the bride, Tony-winning actress Faith Prince gives a poignant performance which believably communicates the full weight of Aggie's numbing workaday existence — the product of years of compromise, struggle and diminished expectations. Like S. Epatha Merkenson, who enlivened the similarly fusty Come Back, Little Sheba a few months ago, Ms. Prince invests her portrayal with deep reserves of empathy and insight, capturing the essence of the unsophisticated, rather frumpish character she is playing with an unaffected simplicity that never stoops to condescension. Sturdy, unruffled support is provided by Tom Wopat, as the cab driver husband who seems like a burnt-out shell but still longs for the things that are just beyond his grasp, and the equally fine Leslie Kritzer, who delivers an understated, eminently credible portrait of a smart, down-to-earth woman whose brisk pragmatism exists mainly as a coping mechanism to weather disappointment.

The remainder of the cast makes less of an impression, although only one member seems entirely out of place. As the gay uncle trying to shoehorn his way into the nuptial preparations, Mr. Fierstein seems to have wandered in from a different show altogether. It goes beyond the fact that his particular brand of comic relief, which relies on rather obvious gay humor, feels out of keeping with the tone of the show itself. For reasons difficult to fully comprehend in show that otherwise seems so firmly ground in the realm of realism, his character hovers on the outskirts of scenes in which he is not featured as an unseen, omnipresent observer; whether this is represents some form of commentary or merely a case of authorial hubris is anybody’s guess.

It is Mr. Fierstein who delivers the show’s all-too-cozy coda, a song encouraging the audience to live life to the fullest. A Catered Affair labors mightily to meet that standard, but in spite of the best efforts of a few of its actors, it mostly feels dull, sluggish and out-of-date. When done correctly, old-fashioned charm can still give off the rosy glow of a polished antique. Unfortunately, when this bouquet of withered roses goes sailing through the air, there’s no one around to catch it — Janey and Ralph may be engaged, but the audience isn’t.