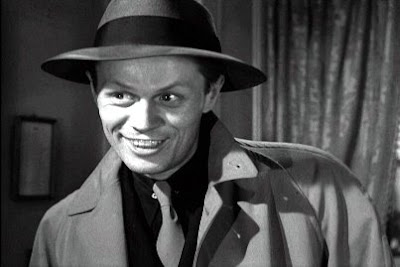 By Edward Copeland
Tommy Udo is one helluva way to announce yourself to movie audiences and Richard Widmark got such a debut in 1947's Kiss of Death, earning an Oscar nomination and stardom as a result. Widmark has passed away at the age of 93.

When I wrote the Academy of Motion Picture Arts and Sciences several years ago, suggesting a list of honorary Oscar possibilities after years of rewarding people who had already won, Widmark was near the top of my list. Alas, the Academy never got around to giving Widmark the richly deserved honor.

For as prolific a career as Widmark had, somehow he seemed to be a star easily neglected and forgot. In fact, I can already hear people reacting to news of his death with "I didn't know he was still alive." Widmark excelled as a tough guy or a streetwise man who liked to make himself out as smarter and tougher than he really was such as in 1950's Night and the City. 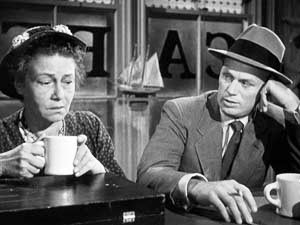 My personal favorite role of his may be in Samuel Fuller's great Pickup on South Street with another Oscar orphan, Thelma Ritter, giving one of her very best turns. He could be an out-and-out villain such as Spencer Tracy's no good son in the Western Broken Lance. He could also be heroic, such as Jim Bowie in John Wayne's bloated telling of The Alamo, or as a simple military prosecutor as in Judgment at Nuremberg. He played a man so reprehensible in Murder on the Orient Express that Agatha Christie's Belgian sleuth Hercule Poirot was willing to let his murder go unpunished. In his later years, he was often a staple in 1970s disaster films or would appear playing a tough type in a light (read bad) comedy such as Hanky Panky or used as a connection to Hollywood's Golden Age such as Taylor Hackford's remake of Out of the Past, Against All Odds.