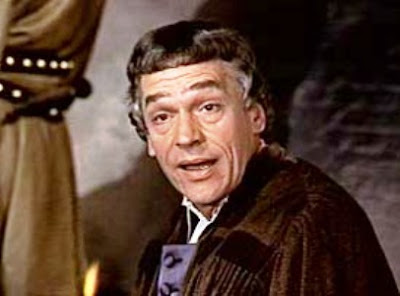 I've always used the running gag that "All British actors are whores" though I always qualified that with one exception: Paul Scofield. The Oscar-winning actor has passed away at 86. He didn't make a lot of films: He concentrated on the stage where, alas, I never saw him. However, most of the times when he did venture in front of the camera, it was a worthy effort.

His most famous film role is certainly the one that won him the Oscar: Sir Thomas More in 1966's A Man for All Seasons. His nobility and wit raised the best picture winner to a higher level as the man who challenged Henry VIII's desire to form a new church just so he could dump a wife.

Two years prior, he played the villainous Nazi trying to make off with Hitler's looted art as Burt Lancaster tried to stop the shipment in John Frankenheimer's The Train.

In 1971, he made a film version of King Lear which I haven't seen but with his passing I want to more than ever. In the 1973 film of Edward Albee's brilliant play A Delicate Balance, he co-starred with Katharine Hepburn. Reviews of the film are mostly tepid, but I've still wanted to see it due to my love of Albee, Scofield and Hepburn.

Shakespeare managed to lure Scofield in front of the camera some other times: as the French king in Kenneth Branagh's Henry V and as the Ghost in Franco Zeffirelli's Hamlet.

Scofield received his second Oscar nomination for his great turn as the elder Van Doren whose son cheated on a Quiz Show just to try to live up to his father's reputation. His last venture on the big screen, as far as I'm concerned, was one of his very best: Playing the harsh Judge Thomas Danforth in Nicholas Hytner's 1996 film version of Arthur Miller's The Crucible. Scofield managed to seem righteous and terrifying while never letting Danforth slip into the realm of simple villainy.

Scofield also famously became one of the first British actors to turn down a knighthood from the queen, refusing the honor on three separate occasions. "If you want a title, what's wrong with mister? If you have always been that, then why lose your title?" Scofield was quoted as saying.

Peter Brook's King Lear is a fascinating interpretation - I wouldn't consider it great, but it is woth watching just for the directorial flourishes, and, of course, the great Mr Scofield.

I think my favorite Scofield performance may be in the darkly absurdist Bartleby, as the flustered bureaucrat brought to the end of his tether by the pesky employee who just won't go away. Since I know you're a big fan of A Delicate Balance, I'd strongly advise against seeing the film version; it's a huge disservice to the play. Remember all the dark humor it had on stage? Remember the laughs Elaine Stritch got for lines like "I am sorry that my nature is such to bring out the full force of your barbarity"? Now imagine those line delievered straight. That's the whole film.

You are correct Partisan. My goof. I'll fix it. Thanks.

I loved the Peter Brook film with Scofield as Lear. I found it devastating and it occupied my mind for the next 3 days. (let's face it, most films don't last until the next day).

I saw a few of Scofield's live performances and I used to think the reason he turned down a knighthood was because he had so much power on stage, like those historical demagogues that influence masses. I was completely mesmerized. It made me kind of think that those theatrical history classes tracing the roots of theatre back to Dionysian ecstacy weren't completely crap, that with the best, something else is there.

But everything about Scofield made me think. He made me think of how they say in Shakespeare that the grand passions are grounded by the common touches, like Lear's "pray thee undo this button". Maybe to recharge artistry you have to reground in everyday life, like Scofield appeared to do. I don't know what true art is, or what it's practitioners do, but Scofield did.

I was lucky enough to be in London for five days in June 1980, going from one theatre performance to the next, or a movie when the theatres were dark. I had bought tickets for a Peter Schaffer play and decided I had enough time to see "The Empire Strikes Back" beforehand. A mistake, as I cut it to close and had to run from Leicester Square to the National Theatre on the Southbank literally reaching my seat as the house light went dark. The play started and what I remember is a very old man seated center stage speaking directly to us about Mozart. This continued as I caught my breath and in the next moment this incredibly old man simply stood up, swept off his stained dressing gown, and was transformed in the blink of an eye into a well-dressed man forty-two years younger. True shock and awe. I was amazed by the performance of the actor playing Salieri and having not received a program beforehand had no idea who it was. I was dumbfounded to find out afterwards that it had been Paul Scofield who I hadn't for a moment recognized, he had so completely transformed himself. It remains to this day one of the finest stage performances that I have been lucky enough to witness.

Thank you for that informative comment. I've heard only the radio play of "Amadeus" and the moment he transforms, his voice goes from a frail scratchy voice becomes a robust deep and forceful one. I could never visualize how it happened but your comment finally unveiled the mystery. thanks!!!!