Last wake for The Wire

BLOGGER'S NOTE: Spoilers lie below for Season 5 episodes 57-60, so don't venture further unless you've seen the final four episodes of The Wire's final season or don't care if you know what happened. 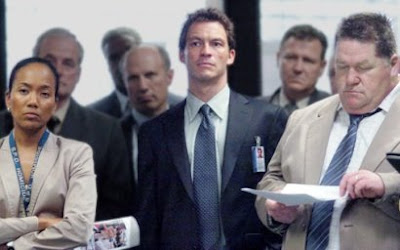 By Edward Copeland
Having now seen the final four episodes of the final season of HBO's great drama The Wire, it seems as if I should be writing a eulogy for a type of television I'll wonder if we will ever see the likes of again. Raise your drinks high fellow Wire lovers to David Simon and what is perhaps the most diverse and interesting ensembles ever assembled. Even if Season 5 was a bit of a letdown overall compared to the ever-growing brilliance of its first four seasons, it's still sad to bid adieu to its depiction of Baltimore.

Though I was disappointed by the first six episodes of season five, the final four did make up for a lot of it even if the finale had almost as many possible endings as Lord of the Rings: Return of the King and the newspaper story never did seem a natural fit or as realistic as the series' portraits of the political, criminal, educational and blue collar segments of Baltimore. While Simon has more than admitted his portrayal of The Baltimore Sun was a bit of sour grapes, the storyline unfortunately played exactly as that at the expense of drama. 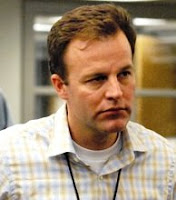 The newspaper's characters, unlike all the others that The Wire covered in such great detail, were portrayed in stark black and white, with very little shades of gray. The worst offense is the Jayson Blair-esque reporter Scott Templeton (Tom McCarthy). Even the coldest of street thugs like Marlo or the worst bureaucrats like Burrell or Rawls were allowed a sense of humanity. Scott Templeton is a cartoon which further hampers this season's story since you can be pretty sure where it's headed. Even though the fake serial killer idea seems too gimmicky for a series as grounded in realism as The Wire, its fine cast of actors make 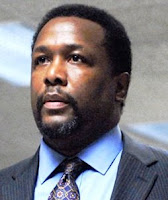 the story work from McNulty (Dominic West) and Lester (Clarke Peters) to Kima (Sonja Sohn) and Bunk (Wendell Pierce), who really become the moral center of the show. The shortened season (a mere 10 episodes versus the usual 12 or 13) also works against it since it adds a lot of new characters to the mix making some of the most significant players from past seasons into glorified cameos. Now, I must take a moment to bitch about Entertainment Weekly. Since I had to watch this season on a delayed basis, I was furious when the magazine revealed the demise of the great character Omar 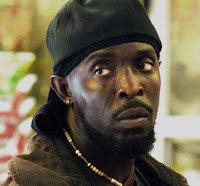 (Michael K. Williams) in a feature that you wouldn't have any reason to suspect would involve The Wire. Still, even though I knew Omar's death was coming, the show still managed to pull it off in a startling and surprising way. Still, from the moment Omar got capped and the signs of Michael (Tristan Wilds) questioning the way Marlo conducted his business, I saw the ending of Michael as a new Omar coming from a mile away. Perhaps that's my greatest disappointment about this season. As great as this series has been, its cynicism runs so deep that by this go-around, pretty much every plot twist could be predicted. Still, the acting was so great and the series offered so many memorable moments (McNulty's reactions to the FBI profile of his fake serial killer was particularly fun), it's difficult to complain too much.

As has been said many times by many people, The Wire was more novel than television and even if the final chapter lagged a bit, overall it was so great that it's being stingy not to love it, warts and all.