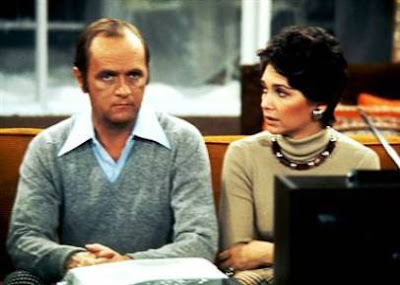 That smoky voice is what I always think of when I think of Suzanne Pleshette. The years of cigarettes that produced that though claimed the actress in the end, less than a year after her husband, Tom Poston, passed away. Actually, the voice isn't really what I remember: It's her part in perhaps the greatest TV series finale ever: Reprising Emily Hartley, her character in the great sitcom The Bob Newhart Show, on the last episode of Newhart.

Her role there alone would be worth paying tribute to, but Pleshette did other things as well.

She appeared in Alfred Hitchcock's The Birds. She acted in not one, but two canine-themed Disney live-action films: The Ugly Dachsund and The Shaggy D.A.

She was a mom concerned about her daughter's mental health in Oh, God! Book II. Her extensive TV work included an Emmy-nominated turn as Leona Helmsley in The Queen of Mean.

Her distinctive voice also was one of the many used in the English-language version of Hayao Miyazaki's Spirited Away. She, along with James Garner, was one of the old pros called in to try to save 8 Simple Rules after John Ritter's untimely death.

On Broadway, she followed Anne Bancroft in the role of Annie Sullivan in The Miracle Worker. Still, it's Emily Hartley that will hold her place in most people's memories, and deservedly so.