Choosing roads, not paving them 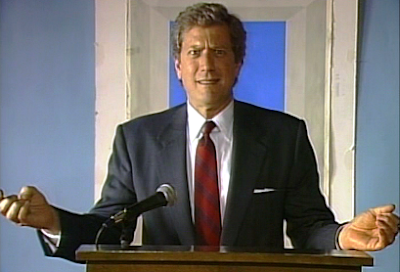 Re-watching the series 20 years later, it's amazing how many of the details still ring true, not only in regard to political campaigns but in the mark it left on other series as well. The short-lived HBO misfire K Street with James Carville and Mary Matalin playing themselves in a fictional lobbying office definitely bore the Tanner lineage in its attempts to capitalize on recent news events. What surprised me though is seeing the seeds of ideas explored in the great HBO series The Wire. Tanner '88 didn't stop to make clear introductions to its large cast of characters: It just jumped in and let the viewer figure it out, just as The Wire has.

The strongest similarity between the two series occurs in the episode "The Girlfriend Factor," where Tanner's tour of a rough inner-city Detroit neighborhood ends with his discovery of a slain child. Still, the most striking resemblance is its huge ensemble cast 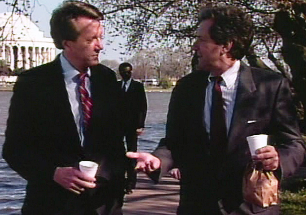 (Altman loved them) of characters including the Tanner campaign team, his family and the press assigned to cover his candidacy as well as extended cameos by celebrities and real-life politicians. Since Altman and Trudeau filmed and wrote the series while the real-life 1988 campaign was going on, their paths crossed with the real race and real candidates such as Bruce Babbitt, Gary Hart, Bob Dole, and Pat Robertson. You even see many real-life pundits and media types such as a young Chris Matthews and Linda Ellerbee. Ellerbee serves as the moderator for a fictional debate between Tanner, Jesse Jackson and Michael Dukakis, a well-edited piece of filmmaking magic that interspersed real debate footage with the fake stuff. Ellerbee also makes some of the most cogent comments of the entire series when it comes to coverage of presidential campaigns, thoughts that still ring true today. Television can't cover change well, Ellerbee says, and that is what any election is ultimately about.

Unfortunately, campaigns then and now turn out to be more about what makes great TV. It's a long, tedious process (and that was 20 years ago! Today's endless campaign makes past ones look like a commercial break). Ellerbee wonders if anyone willing to put themselves through that is someone you should really want as president. Given the task of embodying the former three-term U.S. representative from Michigan was longtime Altman collaborator Michael Murphy and he makes a very believable candidate. Murphy, who played the political operative in Altman's masterpiece Nashville, gets to be the candidate here. He even gets his own, smaller scale Nashville fundraiser which includes the late Waylon Jennings, offering advice on his campaign and jokingly telling a reporter that he will vote "as soon as I pay my poll taxes." 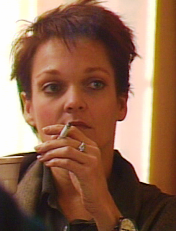 If Murphy is the solid center of the series' universe, Pamela Reed's great work as campaign manager T.J. Cavanaugh gives the show its forceful momentum. T.J. is an absolutely marvelous creation and it's a shame Reed didn't get any Emmy recognition for her work. Whether it's putting out fires or starting new ones, lashing out at underlings or listening to frantic late-night calls from former client then-U.S. Rep. Joe Kennedy, Reed creates a foul-mouthed, chain-smoking wonder. When someone suggests she take a desk job as an assistant to an elected official, T.J. dismisses it out of hand: For her, it's all about the action of the campaign. For those out there who think that Sex and the City was Cynthia Nixon's first great HBO series, they need to check her out here playing Tanner's 19-year-old daughter Alex, whose enthusiasm for causes and desire to be a crucial part of her father's campaign often makes more problems than they solve. While many of the 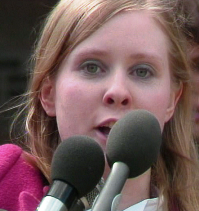 issues discussed in Tanner '88 are still relevant today, it's interesting to see the ones that are gone now. In 1988, Alex Tanner was actively involved in the fight against apartheid in South Africa, which today is thankfully a bad memory. Other lines of dialogue do betray the series' age. When discussing an odd quote by then-President Reagan, T.J. observes that his lines haven't been as good since the Writers Guild strike that was taking place back then. Jack even gets to ape Reagan when a scandal erupts because he's dating the deputy campaign manager for the Dukakis campaign (Wendy Crewson), so he ducks reporters the way Reagan used to, heading to a helicopter and acting as if he can't hear their questions. It's also odd to see people communicating via walkie talkies with nary a cell phone in sight. When Tanner communications director Stringer Kincaid (Daniel Jenkins) is surprised to learn that the Dukakis campaign monitors all TV coverage of other candidates, it seems quaint in the age of YouTube.

The period nature of the piece also shows up at a Hollywood fundraiser when enthusiastic Tanner volunteer Andrea Spinelli (Ilana Levine) informs her boss that Molly Ringwald starred in Pretty in Pink, which made an "amazing" $7 million in its opening weekend. Andrea's character really is the one who develops the most over the course of the Tanner episodes. She transforms from a dizzy, spoiled young woman paying her own way to join the campaign into a miniature tyrant. When a journalist starts to tell her that he's noticed a change, she replies that it's because she's "no longer a nice person."

Altman's direction perfectly suits the material with his fly-on-the-wall approach. There are some nice touches, such as the unsavory photographer Deke (Matt Malloy) capturing an inspired Tanner by filming him through the bottom of a glass coffee table and, with T.J.'s urging, turning the footage into a campaign commercial. Tanner 88 also gets into the nitty gritty of a campaign's mechanics, especially one as underfinanced as Jack Tanner's. After the campaign is over, they face FEC audits and unpaid bills. The same dependence on polls and focus groups that exist today, existed then. A question asked in one focus group ("If ideas are his currency, let's see the color of his money") seems to be asked often today. At the 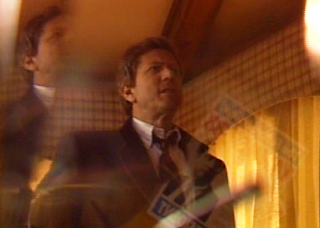 same time, thoughts, usually voiced by the campaign's pollster Emile (Jim Fyfe), could be being said about the amazing rise of the candidacy of Barack Obama today. "More than ever," Emile says, "People want a leader they can believe in. A leader who can lift them up, who can cast a spell." Tanner '88 makes the case that the singer is more important than the song. "Leadership isn't about management," Emile says at another point. "It's about values." What's interesting is that the characters view non-political matters in much the same way. When Tanner's girlfriend meets with the real Kitty Dukakis following the scandal, Kitty tells her that she has to "poll her own heart" about whether her romance with Tanner was worth it. It's a question Tanner asks himself often, since he confides at one point that every day, he feels as if he gives up a little of his soul. 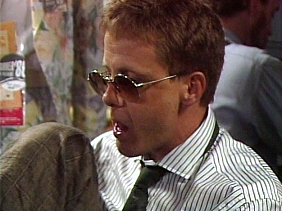 Tanner decides to challenge the apportionment of superdelegates on "principle." Assisting him in this task is a great guest spot by Harry Anderson as the supertracker who knows all the delegations inside and out. His episode is the magnificent "Boiler Room," one of the most viscerally exciting half-hours of TV ever filmed and one that won Robert Altman an Emmy for best directing in a drama series, one of the first Emmys HBO ever won and the first in a series category. The series ends on a cliffhanger of sorts with Tanner contemplating a run as an independent candidate, one that might have happened if the series had been renewed for more episodes. Altman and Trudeau did do a sequel of sorts years later for The Sundance Channel called Tanner on Tanner, focusing on a now-grown Alex making a documentary about her father's campaign. It was a mixed bag, but the original remains peerless and worth watching to this day. As someone who soured on The West Wing over the long haul, I can't help but fantasize what that series could have been like if Altman and Trudeau had helmed it. Their characters all were cast in shades of gray and had distinctive voices. I'd loved to have seen a drama series about a Jack Tanner presidency. 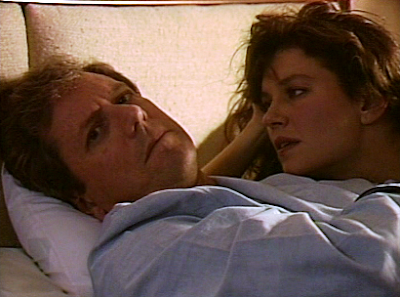