Still full of arsenic after 50 years 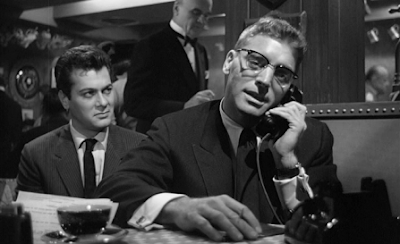 Sally: But Sidney, you make a living. Where do you want to get?
Sidney Falco: Way up high, Sam, where it’s always balmy. Where no one snaps his fingers and says, “Hey, Shrimp, rack the balls!” Or, “Hey, mouse, mouse, go out and buy me a pack of butts.” I don’t want tips from the kitty. I’m in the big game with the big players … In brief, from now on, the best of everything is good enough for me. 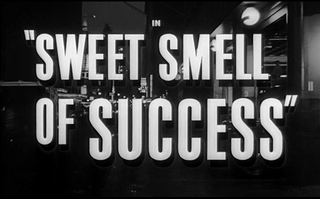 By Wagstaff
Fifty years on, Sweet Smell of Success looks better than ever. Every time I watch it, I forget where it is going. It seems to move irrevocably toward tragedy almost until the end, when disaster is narrowly avoided. Susan and Steve may have escaped the maniacal J.J. Hunsecker’s clutches to start a new life together, but Sidney Falco’s fate isn’t so lucky. This one-of-a-kind movie is hard to categorize: it’s too flamboyant and funny to be just drama. It’s certainly not a comedy. Satiric noir comes nearest but it’s not even that exactly. What it really is is a seething cauldron of big city cynicism. Here are a few quick reasons to watch it again. 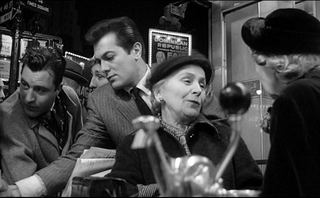 Alexander Mackendrick didn’t direct many movies, but he made the ones he did direct count. A veteran from Britain’s Ealing Studios with such films to his credit as The Man in the White Suit and The Ladykillers, his good eye and sure touch is evident throughout. The details are wonderful, such as the way a paper sign reading “Sidney Falco — Press Agent" is taped to his office/living quarters door, establishing his hungry, low rent status, or the way he doesn’t wear a coat because he can’t afford to tip every hat check girl in town. 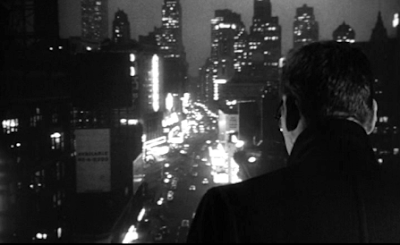 The superb composer Elmer Bernstein contributes another score in a career filled with great film scores. It’s big, loud, and jazzy with more than a hint of urban raunch. It kicks into high gear when J.J. overlooks the city from his apartment balcony; he’s an emperor surveying his dominion. 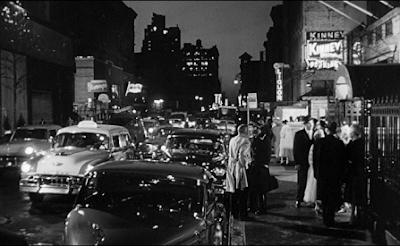 The brilliant cinematographer James Wong Howe’s on location photography is some of the best I’ve ever seen. He could shoot nighttime exteriors like nobody else. Whether the locale is inside or out, his Manhattan is a bustling ant hive of activity that overflows with the lives of millions trying to climb that golden ladder. Burt Lancaster
Our first intimation of J.J. Hunsecker is painted on the side of a newspaper delivery truck. “Read the Globe” it says. “The Eyes of Broadway.” Above it the eyes of J.J. Hunsecker stare out from behind a pair of thick glasses, like the eyes of Dr. T. J. Eckleburg in Fitzgerald’s The Great Gatsby. We hear enough to know he’s powerful, and when we first meet him, the columnist is holding court at 21 Club. Burt Lancaster, in a role modeled after the famous gossip columnist Walter Winchell, shines darkly as the demented Hunsecker. He’s so duplicitous and diabolical that his right hand hasn’t seen his left hand in 30 years. Burt is menacing as hell. One character asks, “Why does everything you say sound like a threat?” “I don’t know,” he replies, “because I never threaten friends.” 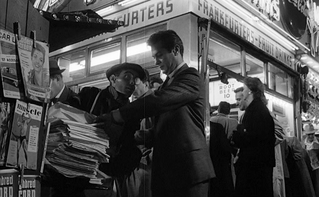 The criminally underrated Tony Curtis plays the press agent Sidney Falco. He jumps through hoops for Hunsecker for little reward. Every dog will have his day, and Sidney wants his. When he fails to break up a romance between Hunsecker’s sister Susan and jazz guitarist Steve Dallas, he knows that J.J. will be pissed. “If he puts 2 and 2 together I’m a chicken in a pot.” Curtis’ amazing performance is a repertoire of nervous tics and desperation. He has a remarkable ability to deliver the rapid-fire dialogue in a way that feels effortless and natural. Actingwise, this is Tony’s movie. All hail Tony Curtis. 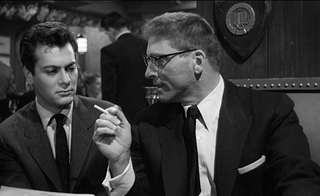 Ernest Lehman and Clifford Odets’ script, based on Lehman’s novel, has some of the most quotable, over-the-top dialogue this side of a Billy Wilder film. There’s a reason one character in Barry Levinson’s Diner speaks only in lines from Sweet Smell of Success. Just read this page of memorable quotes, or better yet, watch the movie.

Bonus Reason
A chance to watch Martin Milner as Steve Dallas in a pre-Adam-12 role.

Comments:
Curtis is good, but it's always about Lancaster for me. He should have been nominated (and won) supporting actor that year.

I think they're both great, but I give more kudos to Curtis because he's lead and Burt is supporting, despite what the billing says.

It's "a cookie laced with arsenic" baked by "the boy with the ice cream face." Love Curtis, love Lancaster. Love Sheree North, love Howe's inky, humid cinematography and Kelso the cop who says, "Sidney, I need to chastise you." I even believe in Marty Milner as a jazz guitarist. The script is pointed as an icepick. I love when Lancaster says, "Senatuh, are we kids or what?" Clifford Odets and Ernest Lehman are the perfect combination. Mackendrick made a flawless picture.