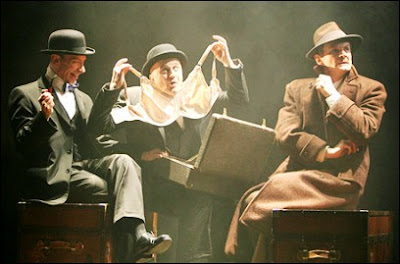 By Josh R
Somewhere, Alfred Hitchcock is smiling. Contrary to what his grave countenance and magisterial manner of speech might suggest, The Master of Suspense was never without 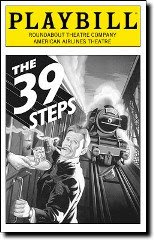 a sense of humor. Even when working in a darker vein, his films featured enough in the way of mordant wit to suggest that the roly-poly shadow looming large from behind the camera existed as mere camouflage for the prankish, mischief-making sensibility of a pre-adolescent boy with joy buzzers strapped to each palm. That feeling of impish playfulness informed both the lightest and the bleakest of his films — even the jolts delivered in Psycho were punctuated by spasmodic, faintly heard fits of the giggles.

If the Master were around today, I imagine he’d be tickled to death by the marvelously silly trifle that British playwright Patrick Barlow has whipped up from the ingredients of his 1935 film, The 39 Steps. At once a loving homage to the black-and-white classic and deliciously tongue-in-cheek takeoff, Maria Aiken’s brilliantly conceived, ingeniously staged production — accomplished with a cast of four and a bare minimum of scenery — proves once and for all that spectacular feats of theatrical sorcery can be achieved without the benefit of advanced technology.

The human imagination, when applied correctly, is capable of even greater special effects. The 39 Steps, which transfers from the American Airlines Theatre to the Cort at the end of April, has magic to spare — and more than enough tricks up its sleeve to keep audiences in stitches for many months to come.

The prototype for Hitchcock’s later, more celebrated effort, North by Northwest, the 1935 classic follows an innocent man mistaken for a criminal, and subsequently plunged headlong into a web of international intrigue involving espionage, murder and other contingencies of smoke-infused cloak-and-dagger. In the film, the admirably unruffled victim of circumstance was played by the great Robert Donat, whose cool, patrician charm lent an element of sophistication to what was, essentially, a primitive form of action film (in terms of its structure, it’s one long chase sequence, pausing only for the occasional bout of sexual flirtation). As portrayed in the Roundabout Theatre production by Charles Edwards — an actor whose fortune is in his quizzically cocked eyebrows — the character of Robert Hannay has become a pipe-smoking, sherry-sipping monument to stiff-upper-lip foppishness, at once both dapper and absurd. As the three women he encounters in his travels — a sinuous femme fatale with an unidentifiable accent, a simpering Scottish farm wife, and a demure, nonplussed blonde who bats her eyelashes with the incredulous sincerity of a tyke sitting on Santa’s lap — Jennifer Ferrin has a pout made for comedy, and sexy, daffy charm in keeping with the spirit of 30’s screwball heroines. Rounding out the cast are two rubber-faced clowns with limbs made of Silly Putty, Arnie Burton and Cliff Saunders, each of whom plays about two dozen characters. One of the chief delights of the production is the manner in which these two great shape-shifters execute their rapid-fire transformations with such dexterity — their energy is so unflagging that it borders on the supernatural. In one particularly dizzying sequence, using only a pair of bound trunks and a succession of hats, the three male ensemble members bring the celebrated train sequence to life with dazzling acrobatics worthy of Chaplin and Keaton.

Does the slapstick spin Barlow and Aiken have applied to The 39 Steps violate the integrity of the original film? Believe it or not, it has the opposite effect. The production is guided as much by a spirit of giddy exultation — of both the source material and its director — as it is by its impudent sense of fun. The creators aren’t so much making fun of The Master as they are paying him a loving, loopy sort of tribute. Mr. Hitchcock was inclined to make cameo appearances in most of films; here, he appears the form of a tiny shadow puppet on a Scottish hillside watching his hero escape with the aid of an accommodating camel (don’t ask). Look very closely, and you can see the slightest glimmer of a smile forming around the edges of his centimeters-long, cigar-chomping mouth. On certain nights, and when no one is looking, I imagine it broadens into an ear-to-ear grin worthy of a Cheshire Cat.

Comments:
The sheer expertise that is this play and production restores ones faith in humanity on so many levels.