Why Rudolph is simply the best 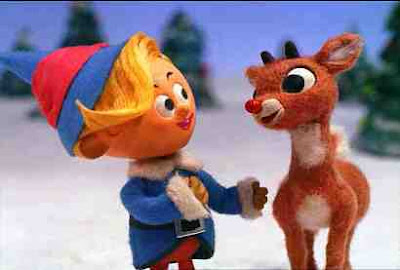 By Edward Copeland
There are numerous examples I could cite as the reason the Rankin/Bass Rudolph the Red-Nosed Reindeer produced for TV in 1964 is the greatest Christmas special ever, but for me, it boils down to one simple thing: It contains an elf who wants to be a dentist.

Of course, the plight of poor Hermey really just symbolizes the timeless message of the tale: Siding with misfits against the conformists. You could layer on just about any metaphor of your choosing and Rudolph the Red-Nosed Reindeer will satisfy it. As I do every year, I watched Rudolph again last night and it held me in its grasp as it has ever since the first time I saw it as a child. Sure, there have been questions I've had that have popped up over the years. (I still don't think they explain why the doll is on the Island of Misfit Toys. She doesn't appear to have any noticeable defect.) 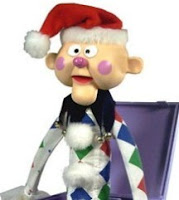 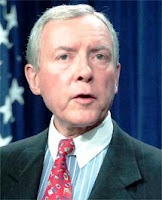 However, it doesn't matter. You have the great Burl Ives as a snowman, leading us through this morality tale which also deserves points just for depicting Santa Claus as an asshole, even though he comes around in the end (Though I still love him complaining to Mrs. Claus about the elves annoying him with their silly song). There are other things I've noticed over the years, though I'm sure I'm the only one who has thought this: Is it me or is their a bit of a resemblance between Charlie in the Box and Utah Sen. Orrin Hatch? The songs are mostly good, the characters are charming and its message is timeless. Contrast Rudolph with that other "holiday classic" Frosty the Snowman, which I've never liked.

Even as a child, I questioned the logic of that silly show. This magic hat brings a snowman to life, yet somehow he knows how to lead the kids through town, only to play dumb when a cop asks him what he's doing. On top of that, the kids develop an unhealthy attachment to Frosty, when they've known him a very short period of time. Most importantly, if the hat combined with Christmas snow provides the magic that brings him to life, why when he melts doesn't he become Frosty the Magic Puddle?

I digress, because this post is about my love for Rudolph the Red-Nosed Reindeer. It is pretty remarkable how cruel it portrays the other characters' treatment of Rudolph and Hermey, but that portrayal makes its message all the more powerful. At the same time, it somehow avoids being preachy in its simple message of tolerance, a message that deserves to be remembered no what season it is.

Comments:
As you may know, there are whole webistes devoted to the "what's wrong with the dolly" question. Arthur Rankin came to the Museum of Television & Radio in 2003. He said they never thought the toys would be scrutinized so closely--they just hadn't thought about what her defect should be, they just thought a doll would be part of the mix.

Thinking was just simpler in the days before websites.

I love Rudolph too, because his show provided me with a place I always knew I'd be welcome: The Island of Misfit Toys. It's too bad it doesn't exist; I'd have a condo there for sure. Maybe somebody would eventually want an Odie in the Box.

As for the dolly: she was named "Psychotic Sally." Pull her string and she'd whip your ass. That's why she was on the Island of Misfit Toys.

I liked Frosty a lot more than you, Ed! At least he's better than that Michael Keaton is the snowman movie. ("You da man! No, I da SNOWMAN!")

My favorite Rankin Bass Christmas special has Rudolph in it, but it isn't this one. It's Rudolph's Shiny New Year, with the baby with the big ass ears and the guy whose song I'm singing right now: The Heat Miser.

Quite nice, Edward. I never had too many problems with Frosty, (though I must admit to Odie that I never cared for Shiny New Year - and yet, that's always the one I'd end up seeing each year, it seemed).

Just goes to show you I shouldn't post very early in the morning (I'm in California right now, so it was like 7:40 AM). The Heat Miser is in The Year Without A Santa Claus, not Shiny New Year. I merged them together in my head--I was so tired.

I love Rudolph's Shiny New Year, but my true fave is The Year Without Santa. And I should hate it, because it's narrated by Shirley Booth. Remember on this very web site I said about her Oscar winning role in Come Back, Little Sheba: "I know why the damn dog ran away!"

My second favorite after Rudolph probably is Santa Claus Is Coming to Town with the Burgermeister Meisterburger.

How about The Little Drummer Boy? The animals in that were great, and I always cry when the lamb is run over. So glad Baby Jesus was there to save him. Some dark themes indeed!