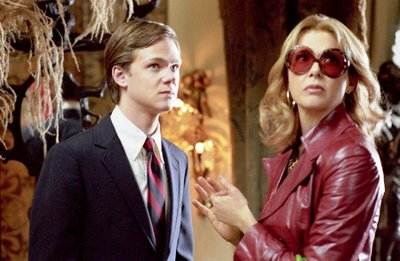 By Edward Copeland
About halfway through the excruciating Running with Scissors, Augusten Burroughs (Joseph Cross) admits that sometimes he fantasizes about grabbing a knife and stabbing both of his parents to death. I admit to harboring the same thoughts as far as this movie is concerned, which turned out to be one of the most annoying filmwatching experiences I've had all year.

What makes it even more puzzling is that somehow, within the stilted archness and hateful characters, most of the actors manage to still turn in good performances, which always presents a quandary for me — should I honor performances that are good in spite of the movies that contain them? While Annette Bening got all the early buzz before the film ever opened, the true standout here is Jill Clayburgh who it is truly great to see in such fine form so long since she's had a really good film role. She plays Agnes, the unstable wife (actually, it seems redundant to call her character unstable since there isn't a stable character in the entire film) of Dr. Finch (Brian Cox), the demanding, crooked shrink of Augusten's mother Deirdre (Bening).

At first, Clayburgh sort of exists merely as background decoration but as the film grinds along, her character becomes more and more important and her scenes contain a gravity that the rest of the film sorely needs.

Bening is good as always, but if she keeps picking roles such as Deirdre in movies as awful as Running With Scissors, I think that Oscar may always elude her whether Hilary Swank is in the running or not. I thought all along the reason she lost for American Beauty was because she was saddled with the film's least likable character. In the case of Being Julia, her character certainly was less grating, but she existed in a movie that few saw and that those who did found very underwhelming.

The third in the troika of the film's great female performances belongs to Evan Rachel Wood as the youngest of Dr. Finch's daughters. She seems to get better and better as she gets older. She also was fine in the underseen Down in the Valley with Edward Norton this year.

For the men, they do what they can. Cross is fine — but he looks too old for what the character is supposed to be. I was stunned when he mentions he's in junior high and later when he celebrates his 15th birthday when he so obviously looks as if he's college age.

Joseph Fiennes is unrecognizable as another of Dr. Finch's "adopted" children — I didn't realize it was him until I checked the credits. Alec Baldwin appears way too briefly as Augusten's dad.

Cox makes the most of his daffy shrink character. At one point, he gathers his family around the toilet stool to stare at his morning bowel movement, declaring "My turd is a direct communication from the holy father." If turds truly were signs of a higher power, Running With Scissors certainly will make an atheist of anyone who endures it.

Comments:
I was not a fan of this film - mainly for the reasons you described. It seems to me that if you're going to make a film based on quirky behavior, the quirkiness needs to exist for some kind of dramatic purpose other than "look at how edgy and different this is!" The antics in Scissors don't seem to be anchored to anything - it's quirkiness for its own sake, and as a result, these characters come across as an unnapetizing, unsympathetic collection of weirdos rather than flesh-and-blood humans whose fates you can actually feel invested in. Films like Little Miss Sunshine and equally delightful Stranger than Fiction (which I just saw) work for the exact reason that Scissors fails - the quirkiness exists in service to the characterization and storyline, as opposed to the other way around.

I agree that Jill Clayburgh and, in particular, Evan Rachel Wood worked small wonders with the material they were given - which, sadly, simply wasn't good enough to allow them to be great. Pior to this, we already knew that Clayburgh could be capable of genius if given roles which measured up to her talent (and Agnes Finch doesn't qualify as such)...from the looks of things, Evan Rachel Wood also has a lot more to offer if given the opportunity.

Bening made a game try in her role, and probably played it as well as anyone could have, but my concerns for her are slightly different than yours. I'd like to see the actress get away from playing highly-strung, uber-neurotic narcissists. It seemed to me that her characters in American Beauty, Being Julia, and in the HBO film Mrs. Harris all existed very much in this vein, and Scissors is a continuation of the trend. As good as she is at playing emotionally volatile women whose neuroses is rooted in extreme vanity, I think now is the time to move on to something different - she too is capable of much, much more.

This just looks frighteningly bad, so I'll definitely have to stay away .. thanks for the warning!

Thank you fro bringing such nice posts. Your blog is always fascinating to read.